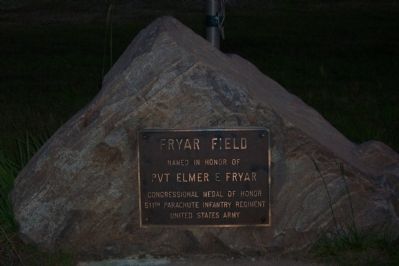 Topics and series. This historical marker is listed in these topic lists: Air & Space • War, World II. In addition, it is included in the Medal of Honor Recipients series list. 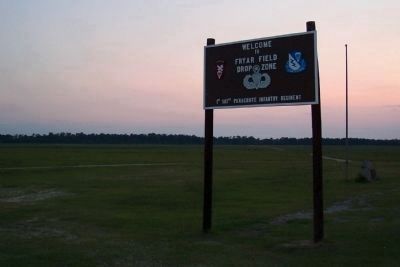 Regarding Fryar Field. Private Elmer E. Fryar was born in Denver, Colorado. He served in Company E, 511th Parachute Infantry Regiment, 11th Airborne Division, United States Army. Fryar was posthumously awarded the Medal of Honor for his actions against the Japanese on Leyte Island in the Philippines on 8 December 1944.

Pvt Fryar exposed himself to the direct fire of an enemy machine gun during an early morning Japanese banzai attack; then, under heavy enemy fire, recovered a wounded Sergeant outside the perimeter; and later in the day purposely stepped in front of his platoon leader and took a fatal burst of automatic fire in his chest from a sniper whom he spotted at the last minute. The posthumous Medal of Honor was the first award to an individual from the 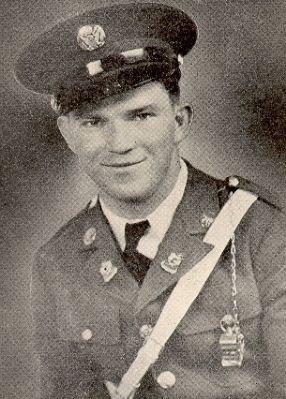 Private Fryar's body was never recovered after the battle. His name is listed on the Tablets of the Missing at Manila American Cemetery, the Philippines.

The first Medal of Honor awarded by President Harry Truman was presented to Private Fryar's parents during a May 1945 ceremony in Denver, Colorado.

Citation:
For conspicuous gallantry and intrepidity at the risk of his life above and beyond the 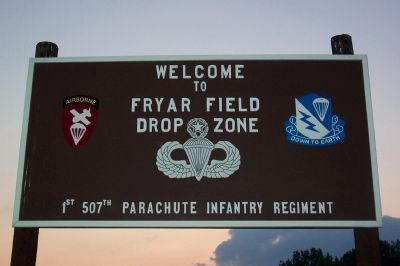 By William Fischer, Jr., July 3, 2008
4. Fryar Field Welcome Sign
call of duty. Pvt. Fryar's battalion encountered the enemy strongly entrenched in a position supported by mortars and automatic weapons. The battalion attacked, but in spite of repeated efforts was unable to take the position. Pvt. Fryar's company was ordered to cover the battalion's withdrawal to a more suitable point from which to attack, but the enemy launched a strong counterattack which threatened to cut off the company. Seeing an enemy platoon moving to outflank his company, he moved to higher ground and opened heavy and accurate fire. He was hit, and wounded, but continuing his attack he drove the enemy back with a loss of 27 killed. While withdrawing to overtake his squad, he found a seriously wounded comrade, helped him to the rear, and soon overtook his platoon leader, who was assisting another wounded. While these 4 were moving to rejoin their platoon, an enemy sniper appeared and aimed his weapon at the platoon leader. Pvt. Fryar instantly sprang forward, received the full burst of automatic fire in his own body and fell mortally wounded. With his remaining strength he threw a hand grenade and killed the sniper. Pvt. Fryar's indomitable fighting spirit and extraordinary gallantry above and beyond the call of duty contributed outstandingly to the success of the battalion's withdrawal and its subsequent attack and defeat of the enemy. His heroic action in unhesitatingly giving his own life for his comrade in arms exemplifies the highest tradition of the U.S. Armed Forces.
— Submitted October 8, 2008, by William Fischer, Jr. of Scranton, Pennsylvania.
2. Fryar Drop Zone
Fryar Drop Zone (or DZ) is used by the United States Army Airborne School for training parachute jumps. During the final week of the school, known as "jump week," all students must make five parachute jumps from a cargo aircraft onto Fryar DZ. Three of these jumps are made with only duty uniform, parachute, and reserve, commonly known as "Hollywood" jumps. The other two are made with full combat gear, to include backpack and dummy weapon, commonly known as "Combat" jumps. Usually one of the jumps is made at night. These first five jumps become somewhat a right of passage for military personnel, particularly in the Army.
— Submitted October 8, 2008, by Craig Swain of Leesburg, Virginia.
Credits. This page was last revised on November 2, 2019. It was originally submitted on October 6, 2008, by William Fischer, Jr. of Scranton, Pennsylvania. This page has been viewed 8,310 times since then and 37 times this year. Last updated on October 20, 2012, by R Wilson of Hoover, Alabama. Photos:   1, 2. submitted on October 6, 2008, by William Fischer, Jr. of Scranton, Pennsylvania.   3. submitted on October 8, 2008.   4. submitted on October 6, 2008, by William Fischer, Jr. of Scranton, Pennsylvania. • Bill Pfingsten was the editor who published this page.

Editor’s want-list for this marker. A clear daylight photo of the marker as well as a wide-view shot of the marker in context. • Can you help?
Share This Page.