“West Point’s Own” “A Marine’s Marine” 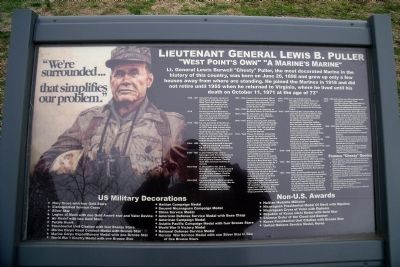 Lt. General Lewis Burwell “Chesty” Puller, the most decorated Marine in the history of this country, was born on June 26, 1898 and grew up only a few houses away from where are standing. He joined the Marines in 1918 and did not retire until 1955 when he returned to Virginia, where he lived until his death on October 11, 1971 at the age of 73”

1898-1917 General Puller grew up here in West Point, attending the local West Point High School. After graduating, he enrolled at the Virginia Military Institute only to drop out a year later.
1918 He then joined the Marines as an enlisted man to fight in World War I. He was sent to Haiti but the war ended before he could make it to France.
1919-1928 He was promoted to Second Lt. of the Marine reserves in June of 1919. Less than a month after he was promoted, he was made inactive due to a reduction in force. He reenlisted later that year to serve with the Gendarmerie d’Haiti, participating in over 40 battles during the next 5 years.
1924-1928 Again he was promoted to Second Lt. and was stationed at several US bases in Virginia, Pennsylvania, 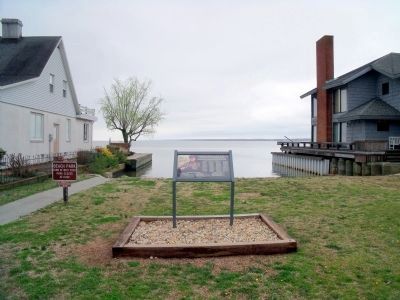 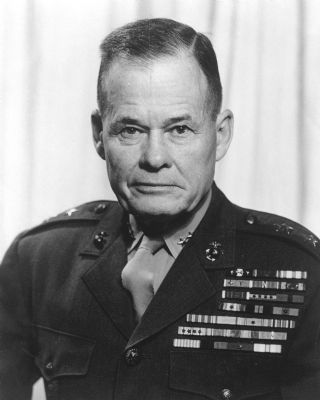 Courtesy USMC
3. Lt. Gen. Lewis Burwell "Chesty" Puller
were cut off and surrounded by seasoned Japanese forces, so he quickly ran to shore and waved in cover fire from a Navy destroyer. This cover fire was just enough for a landing craft to maneuver to shore and save his troops. His valiant efforts continued on Guadalcanal when his battalion was the only American unit defending Henderson Airfield against a full regiment of Japanese troops. Through the 3 hour battle, his troops sustained 70 casualties while the Japanese troops lost 1400 troops. Even against overwhelming odds, his troops prevailed, helping him to earn his 3rd Navy Cross. Through out the battle, Puller was shot twice by a sniper and was wounded by shrapnel in 3 different places, thus earning him the Purple Heart.
1942-1944 Following this valiant effort, he was promoted to executive officer of the whole 7th Marine Regiment. While serving in this position he earned his 4th Navy Cross for his extraordinary leadership abilities. Over the span of less than a month, he was forced to take command of 3 different battalions in his regiment because 2 battalion commanders were wounded. He reorganized these units and successfully led them against heavily fortified Japanese positions. Along with earning his 4th Navy Cross, he was immediately promoted to Colonel, and after just a month, was named commander of the 1st Marine Regiment.
1944-1946 Just 6 months after his promotion, he was named executive officer of the Infantry Training Regiment in Camp Lejeune and was promoted to Commanding officer after only weeks.
1946-1950 When the war had finally ended, he was named director of a reserve regiment in New Orleans and he later commanded the Marine Barracks at Pearl Harbor.
1950-1952 When the Korean War began, he was immediately reassigned as commander of the 1st Marine Division. This 1st Marine Division landed in Inchon, and after just 2 months Puller had earned his 5th Navy Cross during the Battle of Chosin Reservoir. Puller made his most famous quote during this battle “We’ve been looking for the enemy for some time now. We’ve finally found him. We’re surrounded. That simplifies things.” After the Battle of Chosin Reservoir, Puller was promoted to Brigadier General and was Assistant Division Commander of the 1st Marine Division. Soon after that, Puller was promoted to command the whole 1st Division. He led the 1st Division to the completion of many objectives, but after less than a year, he was demoted to his old job and then quickly returned to the U.S.
1952-1955 After his return he was promoted to Major and Lieutenant General serving in several command positions. General Puller retired due to medical reasons.
1966 Even after General Puller had retired he attempted to return to active duty to serve in the Vietnam War, but was denied due to his age.
1971 Lewis Burwell Puller died in Saluda, Virginia on October 11, 1971 at the age of 73. He is buried in Christchurch Parish Cemetery.

Famous “Chesty” Quotes
“All right, they’re on our left, they’re in front of us, they’re behind us…they can’t get away this time.”
“Great. Now we can shoot at those bastards from every direction.”
“We’re surrounded… that simplifies our problem of getting to those people and killing them.”
“Remember, you are the 1st Marines! Not all the Communists in Hell can overrun you!”
“Take me to the Brig. I want to see the real Marines.”
“Alright you bastards, try and shoot me!” (to Korean forces)
“Where do you put the bayonet?” (Upon seeing a flamethrower for the first time)
“You don’t hurt ‘em if you don’t hit ‘em.”
“Hit hard, hit fast, hit often.”
“Retreat! Hell, we’re just advancing in a different direction.”

Location. 37° 31.632′ N, 76° 47.638′ W. Marker is in West Point, Virginia, in King William County. Marker is at the intersection of 1st Street and Main Street, on the right when traveling east on 1st Street. Touch for map. Marker is in this post office area: West Point VA 23181, United States of America. Touch for directions.

More about this marker. On the left is a painting of Lt. Gen. Puller with one of his quips, “We’re surrounded… that simplifies our problem.”