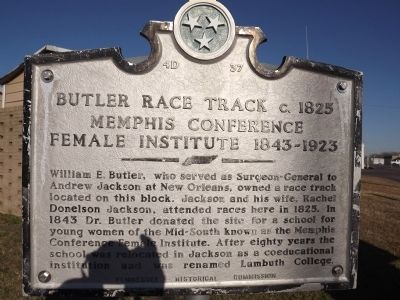 William E. Butler, who served as Surgeon-General to Andrew Jackson in New Orleans, owned a race track located on this block. Jackson and his wife, Rachel Donelson Jackson, attended races here in 1825. In 1843 Dr. Butler donated the site for a school for young women of the Mid-South known as the Memphis Conference Female Institute. After eighty years the school was relocated in Jackson as a coeducational institution and was renamed Lambuth College.

Topics and series. This historical marker is listed in these topic lists: Education • Government & Politics. In addition, it is included in the Former U.S. Presidents: #07 Andrew Jackson, and the Tennessee Historical Commission series lists. A significant historical year for this entry is 1825. 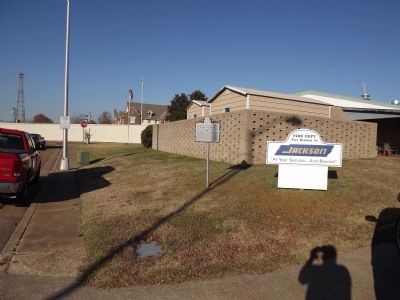 Click or scan to see
this page online
. Marker is at or near this postal address: 440 East Chester Street, Jackson TN 38301, United States of America. Touch for directions.