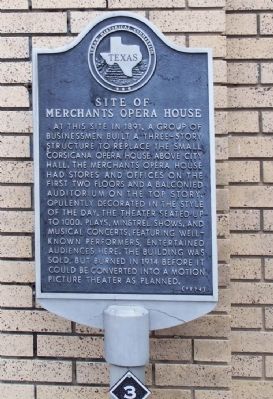 By Mike Stroud, September 17, 2012
1. Site of Merchants Opera House Marker
Inscription.
Site of Merchants Opera House. . At this site in 1891, a group of businessmen built a three-story structure to replace the small Corsicana Opera House above city hall. The Merchants Opera House had stores and offices on the first two floors and a balconied auditorium on the top story. Opulently decorated in the style of the day, the theater seated up to 1000. Plays, minstrel shows, and musical concerts, featuring well-known performers, entertained audiences here. The building was sold, but burned in 1914 before it could be converted into a motion picture theater as planned. . This historical marker was erected in 1974 by Texas Historical Commission. It is in Corsicana in Navarro County Texas

At this site in 1891, a group of businessmen built a three-story structure to replace the small Corsicana Opera House above city hall. The Merchants Opera House had stores and offices on the first two floors and a balconied auditorium on the top story. Opulently decorated in the style of the day, the theater seated up to 1000. Plays, minstrel shows, and musical concerts, featuring well-known performers, entertained audiences here. The building was sold, but burned in 1914 before it could be converted into a motion picture theater as planned. 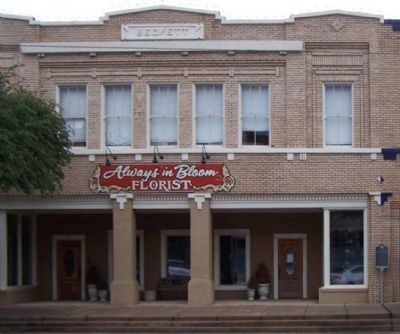 Additional comments.
1. Merchants Opera House
On the ground level there were located the post office, the Oak Hall or Opera house bar, Leverman's Paint Store, a barber shop, and the wide staircase which led to the "Commercial Club" office on the mezzanine floor. The Commercial Club was the then version of the Chamber of Commerce and some of its early managers were Rufus O. Elliott, father of among several children, Arthur G. Elliott, and J. B. Slade. The clubroom doubled as a ballroom and may fine dances were held there annually. The wide stair then went on to the theatre proper.

About 1902 the first motion pictures shown in Corsicana were at the Merchants Opera House. They were advertised as "Sheppards 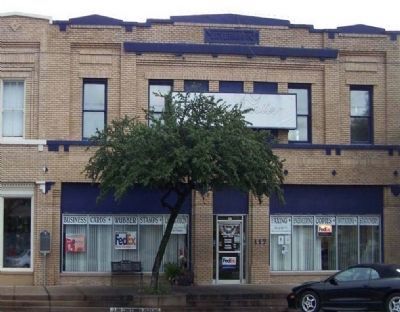 The Opera House was used for many ancillary purposes. Many state political conventions were held there. Religious services, and until the theatre was burned down, the graduation ceremonies of the Corsicana High School were held at the Opera House.

Churches and other groups used the Opera House to stage amateur performances, as well as hold conferences. The Opera House was not a great financial success. In the twenty-odd years of its life, there was only one dividend of 30% paid to the stockholders. But the dividends paid to the community in service to the community, in bringing cultural and dramatic art to the city made the opera house a great asset.

Opera was never sung at the Merchants Opera House. The title "Opera House" was used to avoid the name of "Theatre." To many the theatre was regarded as evil. The theatre itself being a part of the devil's dominion, and all people connected with the theatre were classed as Satan's satraps. So, while it was moral to see the "opera" East Lynne, for example, it was sinful to see the melodrama "East Lynne."

Light opera such as Gilbert and Sullivan's Pirates of Penzance," "Midado," and the rest were sung. And such comic operas as Aubers "Fra Diavolo" and others of the same sort were presented.

The Opera House had a house orchestra, led by a professional musician and staffed by some professionally and some gifted local musicians. One of the leaders of the orchestra was Tony Cruz, a Spanish band leader on Admiral Cevera's flagship in the battle of Santiago Released as a prisoner of war at the end of the Spanish-American war, he drifted to Corsicana (another case of why, and no story like Jake Salinger's to account.)

Some of the travelling theatrical companies carried their own orchestras, others a leader and a few "firsts" and augmented with the local orchestra.

Occasionally, a concert band or orchestra would play from the stage, presenting, usually, a mixed program of popular standard and classical music, so as to reach all of their audience.

Fiddling Bob Taylor and his brother, Alf, appeared on the stage. The Taylors had each been governor of Tennessee and later took to the stage -- separately -- giving a combination lecture, comical skit, mountain music and singing show. One time when Alf Taylor was here, a "gallery god" in the peanut gallery hollered, "louder, louder." Taylor stepped to the footlights held up his hand and declaimed, "On that last awful day, when the trump of doom has sounded, there will be some fool in the back screaming 'Louder, louder, Gabriel." The house kept quiet then.

One of the oddest shows staged at the Opera House was that of Sam Nash around 1905. Nash, a native of Richland and a brother of Clay Nash, at that time was a traveling hypnotist. He hypnotized various subjects on the stage and had them go through various antics and, as the climax, hypnotized a man and put him onto a box such as the outer case of a burial casket. The man was then transported and buried in a six foot grave on a vacant lot on Beaton Street, along about where Golden Brothers Store is now located. Air vents and viewing ducts were attached to the box, an electric light suspended in one of them. Then the sidewalk barker invited the passersby to come in and see the man who was buried alive. Business was good at the macabre show. After four or five days the man was exhumed and carried back to the Opera House where he was taken out of the box and brought back to life, jumping about the stage telling how fine he felt. (excerpt Navarro County Historical Society published in "The Navarro County Scroll", 1966)
— Submitted December 17, 2012, by Mike Stroud of Bluffton, South Carolina.