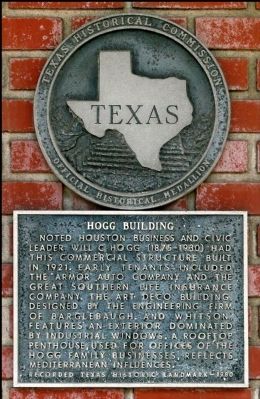 Noted Houston business and civic leader Will C. Hogg (1875-1930) had this commercial structure built in 1921. Early tenants included the Armor Auto Company and the Great Southern Life Insurance Company. The art deco building, designed by the engineering firm of Barglebaugh and Whitson, features an exterior dominated by industrial windows. A rooftop penthouse, used for offices of the Hogg family businesses, reflects Mediterranean influences.

Topics and series. This historical marker is listed in this topic list: Notable Buildings. In addition, it is included in the Art Deco series list. A significant historical year for this entry is 1921. Photographed By Jim Evans, December 30, 2012
2. Hogg Building
The marker is behind and to the right of the streetlight on the near corner. On the roof of the building, hidden behind a parapet, is an 18-room penthouse and solarium. The penthouse housed the personal offices of the Hogg family, with extensive roof gardens. (Note trees on the corners of the roof.)

More about this marker. This building is in the National Register of Historic Places.

Regarding Hogg Building. Will Hogg's father, Govener "Big Jim" Hogg, must have had a sense of humor at the expensive of his child as he named his daughter, Will's sister, Ima Hogg. Myth has it she had a sister named Ura Hogg, but it's just a myth.

Photographed By Jim Evans, December 30, 2012
3. Fountain on the Preston corner of the building

Photographed By Jim Evans, December 30, 2012
4. A different view of the fountain taken from the Preston side of the building 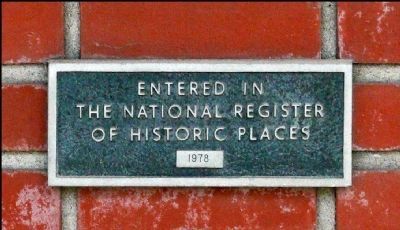