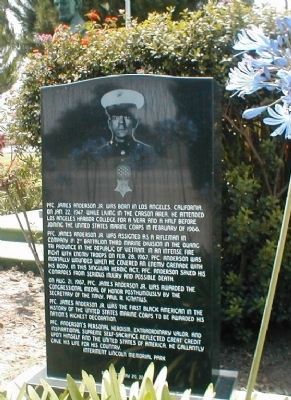 PFC James Anderson Jr. was born in Los Angeles California on Jan. 22, 1947. While living in the Carson area, he attended Los Angeles Harbor College for a year and a half before joining the United States Marine Corps in February of 1966.

PFC James Anderson Jr. was assigned as a rifleman in Company F, 2nd Battalion Third Marine Division in the Quang Tri Province in the Republic of Vietnam. In an intense fire fight with enemy troops on Feb. 28, 1967, PFC. Anderson was mortally wounded when he covered an enemy grenade with his body. In this singular heroic act, PFC Anderson saved his comrades from serious injury and possible death.

On Aug. 21. 1967, PFC James Anderson Jr. was awarded the Congressional Medal of Honor posthumously by the Secretary of the Navy, Paul R. Ignatius.

PFC James Anderson Jr. was the first black American in the history of the United States Marine Corps to be awarded his nations highest decoration.

PFC Anderson’s personal heroism, extraordinary valor, and inspirational supreme self-sacrifice reflected great credit upon himself and the United States of America he gallantly gave his life for his country.
Interment Lincoln Memorial Park

Topics and series. This memorial 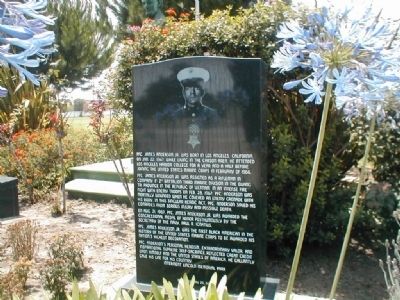 Click or scan to see
this page online
is listed in these topic lists: African Americans • War, Vietnam. In addition, it is included in the Medal of Honor Recipients series list.

Location. 33° 52.878′ N, 118° 14.934′ W. Marker is in Compton, California, in Los Angeles County. Memorial can be reached from South Central Avenue south of West Caldwell Street, on the right when traveling south. The Anderson Monument is located in Lincoln Memorial Park Cemetery at the entrance. Touch for map. Marker is at or near this postal address: 16701 South Central Avenue, Carson CA 90746, United States of America. Touch for directions. 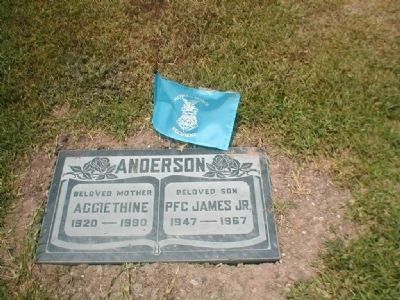 Photographed By Don Morfe
3. PFC James Anderson Grave Site
PFC James Anderson's grave is located in Lincoln Memorial Park Cemetery, Section M-6, Grave 23. GPS N33.8812 W118.2495.
Place and date: Republic of Vietnam, 28 February 1967. Entered service at: Los Angeles, Calif. Born: 22 January 1947, Los Angeles, Calif. Citation: For conspicuous gallantry and intrepidity at the risk of his life above and beyond the call of duty. Company F was advancing in dense jungle northwest of Cam Lo in an effort to extract a heavily besieged reconnaissance patrol. Pfc. Anderson's platoon was the lead element and had advanced only about 200 meters when they were brought under extremely intense enemy small-arms and automatic weapons fire. The platoon reacted swiftly, getting on line as best they could in the thick terrain, and began returning fire. Pfc. Anderson found himself tightly bunched together with the other members of the platoon only 20 meters from the enemy positions. As the fire fight continued several of the men were wounded by the deadly enemy assault. Suddenly, an enemy grenade landed in the midst of the marines and rolled alongside Pfc. Anderson's head. Unhesitatingly and with complete disregard for his personal safety, he reached out, grasped the grenade, pulled it to his chest and curled around it as it went off. Although several marines received shrapnel from the grenade, his body absorbed the major force of the explosion. In this singularly heroic act, Pfc. Anderson saved his comrades from serious injury and possible death. His personal heroism, extraordinary valor, and inspirational supreme self-sacrifice reflected great credit upon himself and the Marine Corps and upheld the highest traditions of the U.S. Naval Service. He gallantly gave his life for his country.
— Submitted January 19, 2013.
Credits. This page was last revised on December 26, 2021. It was originally submitted on January 18, 2013, by Don Morfe of Baltimore, Maryland. This page has been viewed 1,639 times since then and 125 times this year. Photos:   1, 2, 3. submitted on January 18, 2013, by Don Morfe of Baltimore, Maryland. • Syd Whittle was the editor who published this page.
Share this page.