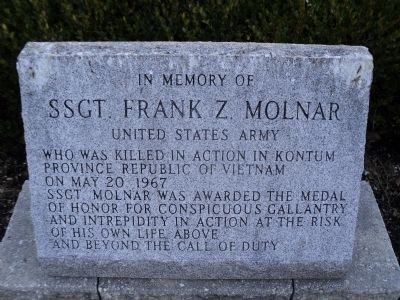 By Bill Coughlin, January 19, 2013
1. SSgt. Frank Z. Molnar Marker
Inscription.
SSgt. Frank Z. Molnar. .
In memory of SSgt. Frank Z. Molnar United States Army. who was killed in action in Kontum Province Republic of Vietnam on May 20, 1967. SSgt. Molnar was awarded the Medal of Honor for conspicuous gallantry and intrepidity in action at the risk of his own life above and beyond the call of duty. . This historical marker is in New Brunswick in Middlesex County New Jersey

In memory of
SSgt. Frank Z. Molnar
United States Army
who was killed in action in Kontum Province Republic of Vietnam on May 20, 1967.
SSgt. Molnar was awarded the Medal of Honor for conspicuous gallantry and intrepidity in action at the risk of his own life above and beyond the call of duty.

Topics and series. This historical marker is listed in this topic list: War, Vietnam. In addition, it is included in the Medal of Honor Recipients series list.

Location. 40° 29.6′ N, 74° 26.627′ W. Marker is in New Brunswick, New Jersey, in Middlesex County. Marker can be reached from Livingston Avenue (County Route 171) south of Liberty Street, on the left when traveling south. Marker is located in Monument Square Park. Touch for map. Marker is in this post office area: New Brunswick NJ 08901, United States of America. Touch for directions. 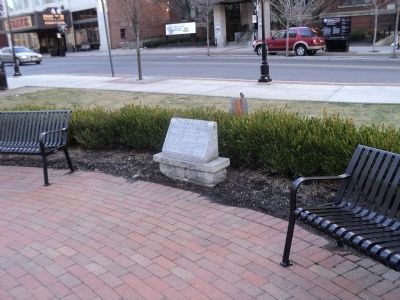 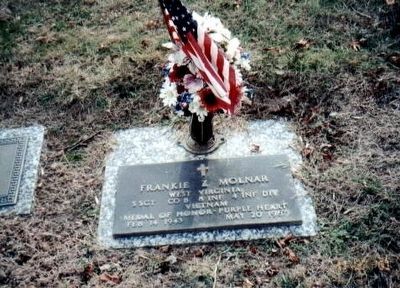 By Don Morfe, November 27, 2001
3. SSgt. Frank Z. Molnar Marker-Vietnam Congressional Medal of Honor Recipient
He is buried in Highland Memorial Gardens (Garden of Everlasting Life Section 18B #2)Pecks Mill, WV. He was Killed In Action. His Medal of Honor information and citation is: *MOLNAR, FRANKIE ZOLY • Rank and Organization: Staff Sergeant, U.S. Army, Company B, 1st Battalion, 8th Infantry, 4th Infantry Division • Place and Date: Kontum Province, Republic of Vietnam, 20 May 1967 Citation: For conspicuous gallantry and intrepidity in action at the risk of his life above and beyond the call of duty. S/Sgt. Molnar distinguished himself while serving as a squad leader with Company B, during combat operations. Shortly after the battalion's defensive perimeter was established, it was hit by intense mortar fire as the prelude to a massive enemy night attack. S/Sgt. Molnar immediately left his sheltered location to insure the readiness of his squad to meet the attack. As he crawled through the position, he discovered a group of enemy soldiers closing in on his squad area. His accurate rifle fire killed 5 of the enemy and forced the remainder to flee. When the mortar fire stopped, the enemy attacked in a human wave supported by grenades, rockets, automatic weapons, and small-arms fire. After assisting to repel the first enemy assault, S/Sgt. Molnar found that his squad's ammunition and grenade supply was nearly expended. Again leaving the relative safety of his position, he crawled through intense enemy fire to secure additional ammunition and distribute it to his squad. He rejoined his men to beat back the renewed enemy onslaught, and he moved about his area providing medical aid and assisting in the evacuation of the wounded. With the help of several men, he was preparing to move a severely wounded soldier when an enemy hand grenade was thrown into the group. The first to see the grenade, S/Sgt. Molnar threw himself on it and absorbed the deadly blast to save his comrades. His demonstrated selflessness and inspirational leadership on the battlefield were a major factor in the successful defense of the American position and are in keeping with the finest traditions of the U.S. Army. S/Sgt. Molnar's actions reflect great credit upon himself, his unit, and the U.S. Army.
Credits. This page was last revised on June 16, 2016. It was originally submitted on January 19, 2013, by Bill Coughlin of North Arlington, New Jersey. This page has been viewed 360 times since then and 6 times this year. Photos:   1, 2. submitted on January 19, 2013, by Bill Coughlin of North Arlington, New Jersey.   3. submitted on March 18, 2016, by Don Morfe of Baltimore, Maryland.
Share This Page.