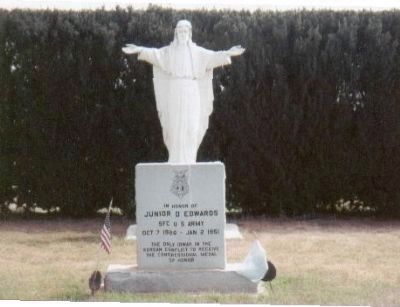 By Don Morfe, September 2, 2000
1. In Memory of Junior Edwards Marker
Inscription.
Junior D. Edwards Memorial. .
In honor of Junior D. Edwards SFC U.S. Army Oct 2, 1926 Jan 2, 1951 The only Iowan in the Korean Conflict to receive the Congressional Medal of Honor. . This memorial is in Indianola in Warren County Iowa

Location. 41° 20.988′ N, 93° 33.438′ W. Marker is in Indianola, Iowa, in Warren County. Memorial can be reached from South Jefferson Way (U.S. 65/69) south of 10th Street, on the left when traveling south. This monument is located in Odd Fellows Cemetery. Touch for map. Marker is in this post office area: Indianola IA 50125, United States of America. Touch for directions. 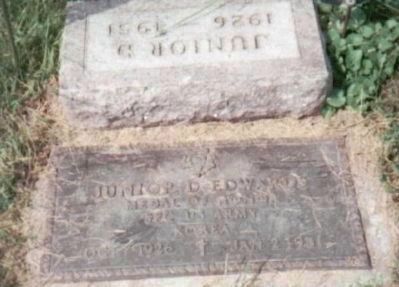 By Don Morfe, September 2, 2000
2. Junior Edwards gravesite
Junior Edwards is buried in Odd Fellows Cemetery. The grave GPS coordinates are N41.3492 W93.5585
Company E, distinguished himself by conspicuous gallantry and intrepidity above and beyond the call of duty in action against the enemy. When his platoon, while assisting in the defense of a strategic hill, was forced out of its position and came under vicious raking fire from an enemy machine gun set up on adjacent high ground, Sfc. Edwards individually charged the hostile emplacement, throwing grenades as he advanced. The enemy withdrew but returned to deliver devastating fire when he had expended his ammunition. Securing a fresh supply of grenades, he again charged the emplacement, neutralized the weapon and killed the crew, but was forced back by hostile small-arms fire. When the enemy emplaced another machine gun and resumed fire, Sfc. Edwards again renewed his supply of grenades, rushed a third time through a vicious hail of fire, silenced this second gun and annihilated its crew. In this third daring assault he was mortally wounded but his indomitable courage and successful action enabled his platoon to regain and hold the vital strongpoint. Sfc. Edwards' consummate valor and gallant self-sacrifice reflect the utmost glory upon himself and are in keeping with the esteemed traditions of the infantry and military service. 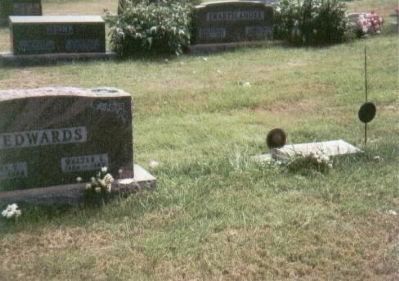