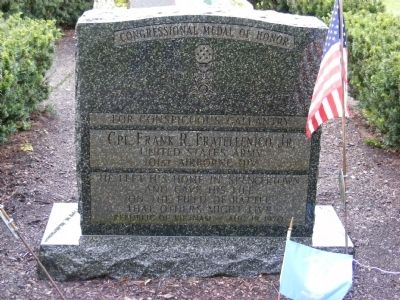 By Don Morfe, October 13, 2009
1. Cpl. Frank R. Fratellenico, Jr. Marker
Inscription.
Cpl. Frank R. Fratellenico, Jr.. Vietnam War Congressional Medal of Honor Recipient. For Conspicuous Gallantry-United States Army-101st Airborne Div.-He left his home in Spencertown and gave his life on the field of battle that others might live. Republic of Vietnam-August 19, 1970 . This memorial was erected in 1990. It is in Spencertown in Columbia County New York

For Conspicuous Gallantry-United States Army-101st Airborne Div.-He left his home in Spencertown and gave his life on the field of battle that others might live. Republic of Vietnam-August 19, 1970

Topics and series. This memorial is listed in this topic list: War, Vietnam. In addition, it is included in the Medal of Honor Recipients series list. 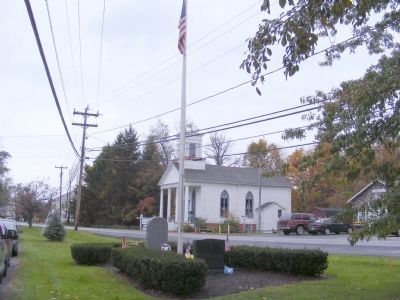 Click or scan to see
this page online
(within shouting distance of this marker); Spencertown Academy (about 500 feet away, measured in a direct line); Old Corner Store (about 700 feet away); Elisha Williams (approx. 0.2 miles away). Touch for a list and map of all markers in Spencertown.

Regarding Cpl. Frank R. Fratellenico, Jr.. MEDAL OF HONOR CITATION-*FRATELLENICO, FRANK R. (KILLED IN ACTION)
Rank and organization Corporal, U.S. Army, Company B, 2d Battalion, 502d Infantry, 1st Brigade, 101st Airborne Division. Place and date: Quang Tri Province, Republic of Vietnam, 19 August 1970. Entered service at: Albany, N.Y. Born: 14 July 1951, Sharon, Conn. Citation: Cpl. Fratellenico distinguished himself while serving as a rifleman with Company B. Cpl. Fratellenico's squad was pinned down by intensive fire from 2 well-fortified enemy bunkers. At great personal risk Cpl. Fratellenico maneuvered forward and, using hand grenades, neutralized the first bunker which was occupied by a number of enemy soldiers. While attacking the second bunker, enemy fire struck Cpl. Fratellenico, causing him to fall to the ground and drop a grenade which he was preparing to throw. Alert to the imminent danger to his comrades, Cpl. Fratellenico retrieved the grenade and fell upon it an instant before it exploded. His heroic actions prevented death or serious injury to 4 of his comrades nearby and inspired his unit which subsequently overran the enemy position. Cpl. Fratellenico's conspicuous gallantry, extraordinary heroism, and intrepidity at the cost of his life, above and beyond the call of duty, are in keeping with the highest traditions of the military service and reflect great credit on him, his unit, and the U.S. Army.
Credits. This page was last revised on June 16, 2016. It was originally submitted on January 20, 2013, by Don Morfe of Baltimore, Maryland. This page has been viewed 588 times since then. Photos:   1, 2. submitted on January 20, 2013, by Don Morfe of Baltimore, Maryland. • Bill Pfingsten was the editor who published this page.
Share This Page.