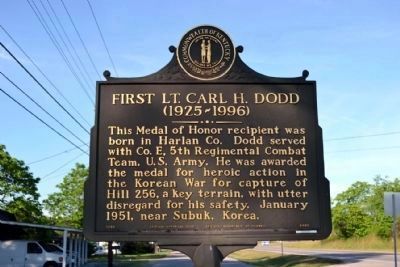 By Duane Hall, May 24, 2015
1. First Lt. Carl H. Dodd Marker
Inscription.
First Lt. Carl H. Dodd, also, Medal of Honor Winner. (side 1) . First Lt. Carl H. Dodd . . This Medal of Honor recipient was born in Harlan Co. Dodd served with Co. E, 5th Regimental Combat Team, U.S. Army. He was awarded the medal for heroic action in the Korean War for capture of Hill 256, a key terrain, with utter disregard for his safety, January 1951, near Subuk, Korea. . . (side 2) . Medal of Honor Winner . . President Harry S. Truman presented Carl H. Dodd with this award in May 1951. He achieved the rank of major before retiring from the U.S. Army on June 30, 1965. He lived in Laurel County the last 33 years of his life. Died on October 13, 1996. . Presented by VFW Post 3167. Williamsburg; VFW Post 3302, London; VFW District II; DAV Chapter 158, Keavy; John C Karr; and Walter Setser. . This historical marker was erected in 1999 by Kentucky Historical Society, Kentucky Department of Highhways. It is in Lily in Laurel County Kentucky

This Medal of Honor recipient was born in Harlan Co. Dodd served with Co. E, 5th Regimental Combat Team, U.S. Army. He was awarded the medal for heroic action in the Korean War for capture of Hill 256, a key terrain, with utter disregard for his safety, January 1951, near Subuk, Korea.

(side 2)
Medal of Honor Winner

Topics and series. This historical marker is listed in this topic list: War, Korean. In addition, it is included in the Former U.S. Presidents: #33 Harry S. Truman 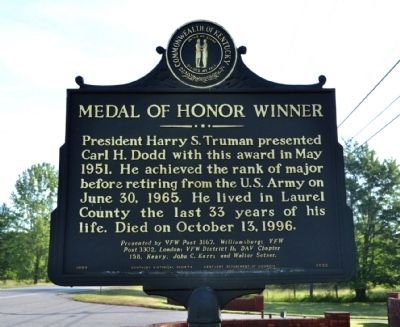 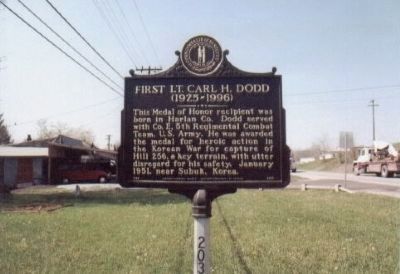 By Don Morfe, April 18, 2002
3. First Lt. Carl H. Dodd Marker
1951. Citation: 1st Lt. Dodd, Company E, distinguished himself by conspicuous gallantry and intrepidity above and beyond the call of duty in action against the enemy. First Lt. Dodd, given the responsibility of spearheading an attack to capture Hill 256, a key terrain feature defended by a well-armed, crafty foe who had withstood several previous assaults, led his platoon forward over hazardous terrain under hostile small-arms, mortar, and artillery fire from well-camouflaged enemy emplacements which reached such intensity that his men faltered. With utter disregard for his safety, 1st Lt. Dodd moved among his men, reorganized and encouraged them, and then single-handedly charged the first hostile machine gun nest, killing or wounding all its occupants. Inspired by his incredible courage, his platoon responded magnificently and, fixing bayonets and throwing grenades, closed on the enemy and wiped out every hostile position as it moved relentlessly onward to its initial objective. Securing the first series of enemy positions, 1st Lt. Dodd again reorganized his platoon and led them across a narrow ridge and onto Hill 256. Firing his rifle and throwing grenades, he advanced at the head of his platoon despite the intense concentrated hostile fire which was brought to bear on their narrow avenue of approach. When his platoon was still 200 yards from the objective he moved ahead and 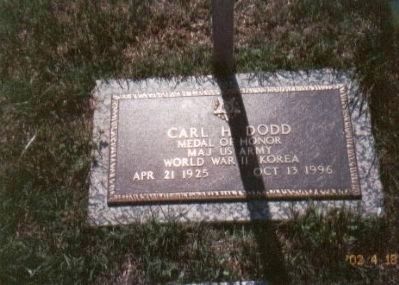 By Don Morfe, April 18, 2002
4. Carl H. Dodd gravesite
Carl Dodd is buried in Cumberland Memorial Gardens Cemetery, Lily KY, Lot 132. The grave GPS coordinates are N37.0259 W84.0627
with his last grenade destroyed an enemy mortar killing the crew. Darkness then halted the advance but at daybreak 1st Lt. Dodd, again boldly advancing ahead of his unit, led the platoon through a dense fog against the remaining hostile positions. With bayonet and grenades he continued to set pace without regard for the danger to his life, until he and his troops had eliminated the last of the defenders and had secured the final objective. First Lt. Dodd's superb leadership and extraordinary heroism inspired his men to overcome this strong enemy defense reflecting the highest credit upon himself and upholding the esteemed traditions of the military service. 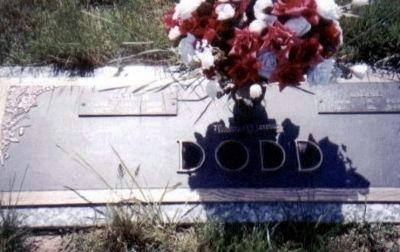 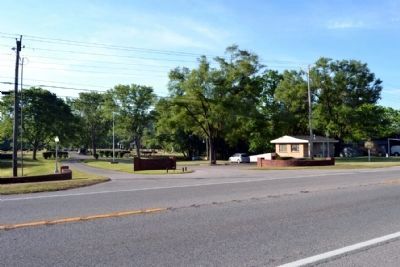 By Duane Hall, May 24, 2015
6. Entrance to Cumberland Memorial Gardens
Marker is located to the right (south) of the entrance 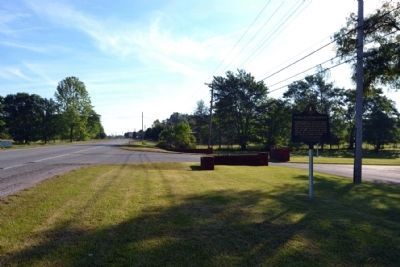 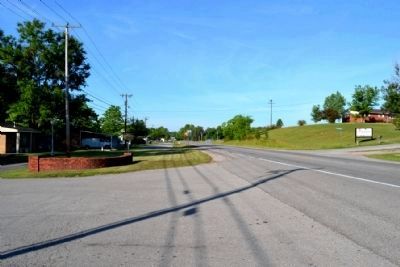 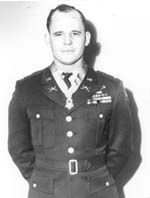 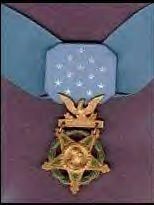