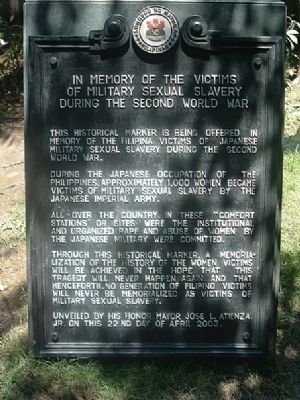 This historical marker is being offered in memory of the Filipina victims of Japanese Military sexual slavery during the Second World War.

During the Japanese occupation of the Philippines approximately 1,000 women became victims of military sexual slavery by the Japanese imperial army.

All over the country, in these "Comfort Stations" or sites were the institutional and organized rape and abuse of women by the Japanese military were committed.

Through this historical marker. A memorialization of this history of the women victims will be achieved in the hope that this tragedy will never happen again and that henceforth, no generation of Filipino victims will never be memorialized as victims of military sexual slavery.

Topics. This historical marker is listed in this topic list: War, World II. A significant historical month for this entry is April 2003. 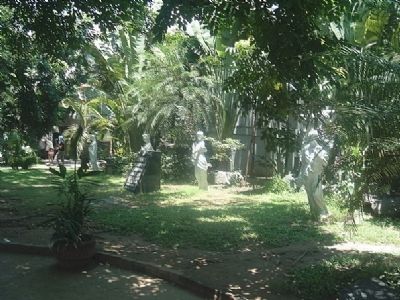 By I.G.V.Atajar, January 5, 2003
2. In Memory of the Victims of Military Sexual Slavery during the Second World War Marker

Click or scan to see
this page online
Ermita, Manila. Marker can be reached from Taft Avenue. Touch for map. Marker is in this post office area: Ermita, Manila 02 527, Philippines. Touch for directions.

Other nearby markers. At least 8 other markers are within walking distance of this marker. Andres Bonifacio (within shouting distance of this marker); Philippine Post Office (about 120 meters away, measured in a direct line); Mother Francisca del Espiritu Santo (about 150 meters away); Manila Metropolitan Theater (about 180 meters away); College of San Juan de Letran (about 180 meters away); Hospital de San Juan de Dios (approx. 0.2 kilometers away); Beaterio-Colegio de Santa Catalina (approx. 0.3 kilometers away); Chapel of the Franciscan Venerable Third Order (approx. 0.4 kilometers away). Touch for a list and map of all markers in Ermita.
Credits. This page was last revised on June 16, 2016. It was originally submitted on December 4, 2009, by I.G.V.Atajar of San Jose, California. This page has been viewed 1,304 times since then. Last updated on February 3, 2013, by Richard E. Miller of Oxon Hill, Maryland. Photos:   1, 2. submitted on December 4, 2009, by I.G.V.Atajar of San Jose, California. • Craig Swain was the editor who published this page.
Share this page.