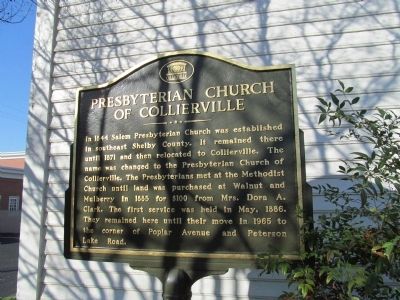 In 1844 Salem Presbyterian Church was established in southeast Shelby County. It remained there until 1871 and then relocated to Collierville. The name was changed to the Presbyterian Church of Collierville. The Presbyterians met at the Methodist Church until land was purchased at Walnut and Mulberry in 1885 for $100 from Mrs. Dora A. Clark. The first service was held in May, 1886. They remained here until their move in 1965 to the corner of Poplar Avenue and Peterson Lake Road.

Topics. This historical marker is listed in this topic list: Churches & Religion. A significant historical month for this entry is May 1886. 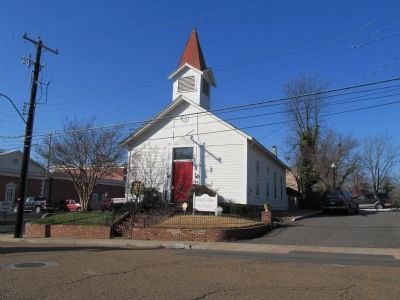 Click or scan to see
this page online
this marker); Chalmers's Collierville Raid (within shouting distance of this marker); Tom Brooks Park (about 300 feet away, measured in a direct line); Fort/Stockade (about 300 feet away); First Baptist Church (about 400 feet away); Collierville United Methodist Church (about 400 feet away). Touch for a list and map of all markers in Collierville.
Credits. This page was last revised on June 16, 2016. It was originally submitted on February 8, 2013, by Judith Barber of Marietta, Georgia. This page has been viewed 352 times since then and 9 times this year. Photos:   1, 2. submitted on February 8, 2013, by Judith Barber of Marietta, Georgia. • Bernard Fisher was the editor who published this page.
Share This Page.