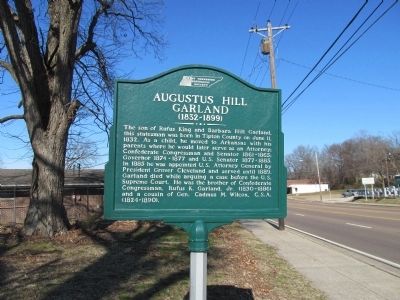 By Judith Barber, February 5, 2013
1. Augustus Hill Garland Marker
Inscription.
Augustus Hill Garland. The son of Rufus King and Barbara Hill Garland, this statesman was born in Tipton County on June 11, 1832. As a child, he moved to Arkansas with his parents where he would later serve as an Attorney; Confederate Congressman and Senator 1861–1865; Governor 1874–1877 and U.S. Senator 1877–1885. In 1885 he was appointed U.S. Attorney General by President Grover Cleveland and served until 1889. Garland Died while arguing a case before the U.S. Supreme Court. He was the brother of Confederate Congressman, Rufus K. Garland, Jr. (1830–1886) and a cousin of Gen. Cadmus M. Wilcox, C.S.A (1824–1890). . This historical marker was erected by Western Tennessee Historical Society. It is in Covington in Tipton County Tennessee

Topics and series. This historical marker is listed in this topic list: Government & Politics. In addition, it is included in the Former U.S. Presidents: #22 and #24 Grover Cleveland series list. A significant historical month for this entry is June 1824. 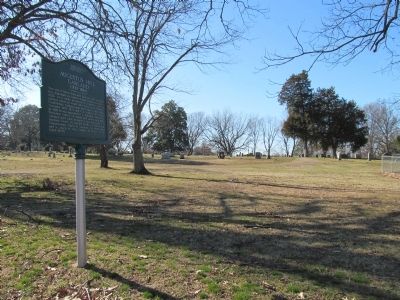 Click or scan to see
this page online
, on the right when traveling south on U.S. 51. Touch for map. Marker is at or near this postal address: 675 TN 51 S, Covington TN 38019, United States of America. Touch for directions.

Other nearby markers. At least 8 other markers are within walking distance of this marker. General Jacob Tipton (approx. ¼ mile away); The Site of Byars-Hall High School (approx. ¼ mile away); Charles B. Simonton (approx. 0.3 miles away); Cadmus Marcellus Wilcox (approx. 0.3 miles away); Thomas Goode (approx. 0.4 miles away); Joe Brown Bivouac, U.C.V. (approx. 0.4 miles away); Last Speech of General Nathan Bedford Forrest (approx. half a mile away); Tipton County Confederate Monument (approx. half a mile away). Touch for a list and map of all markers in Covington.
Credits. This page was last revised on December 17, 2019. It was originally submitted on February 9, 2013, by Judith Barber of Marietta, Georgia. This page has been viewed 443 times since then and 31 times this year. Photos:   1, 2. submitted on February 9, 2013, by Judith Barber of Marietta, Georgia. • Bernard Fisher was the editor who published this page.
Share this page.