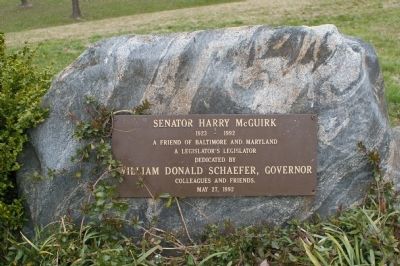 Photographed By Christopher Busta-Peck, March 18, 2008
1. Senator Harry McGuirk Marker
Inscription.
Senator Harry McGuirk. A friend of Baltimore and Maryland. A legislator's legislator. . This historical marker was erected in 1992 by William Donald Schaefer, Governor; "Colleagues and Friends". It is in Middle Branch/Reedbird Parks in Baltimore Maryland

A friend of Baltimore and Maryland. A legislator's legislator.

Topics. This historical marker is listed in this topic list: Government & Politics. A significant historical month for this entry is May 1900.