For the Sake of the Children 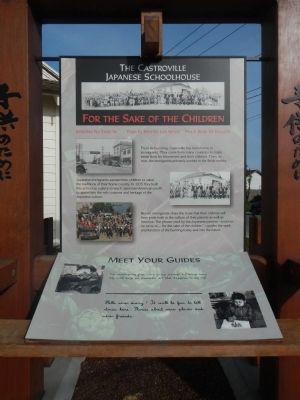 From its founding, Castroville has been home to immigrants. They came from many countries to make better lives for themselves and their children. Then, as now, the immigrants primarily worked in the fields nearby.
Japanese immigrants wanted their children to value the traditions of their home country. In 1935 they built this school as a place to teach Japanese-American youth to appreciate the rich customs and heritage of the Japanese culture.
Recent immigrants share the hope that their children will have pride both in the culture of their parents as well as America. The phrase used by the Japanese parents – kodomo no tame ni - “for the sake of the children” – guides the spirit and functions of the building today and into the future.

Meet Your Guides
I’m writing my first entry in my journal. Writing every day will help me remember all that happens in my life. (Japanese wife, left panels)
Hello new diary! It will be fun to tell stories here. Stories about new places and new friends.(young Japanese boy, right panels)

By Barry Swackhamer, January 29, 2013
2. Arriving at a New Home (1920s) panel
Captions: Typical Japanese family portrait in front of farmhouse. Shigernasa and Kitamura family on farm, 1928.
Click on image to enlarge.
panel)
By the 1920s, about a dozen Japanese families lived in the Castroville area. Most were farmers who leased land, though some purchased land in the name of their American-born children or formed corporations to hold land.
May 12, 1927
I like it here – there are other Japanese families with young children. But life is hard, just trying to make ends meet with what my husband makes farming.
(right panel)
Most children were Nisei, second generation. Often families moved from farm to farm. Some settled in towns like Castroville where the Japanese community slowly grew.
May 12, 1927
It’s fun here. There are Japanese kids like me living here. I can make new friends now that we live in this town. And I help out on the farm sometimes.

(left panel)
Funds were collected through the Salinas Buddhist Temple to raise money to buy the land to build a new Japanese language school. The school opened in 1936. In time one Italian girl enrolled.
November 4, 1936
We built a beautiful new school! It was hard work for all of us. We have religious services and weddings and funerals there. I hope that my children will learn some of the traditions and the language of my country.
(right panel)
The children of the Japanese community walked across the street from

By Barry Swackhamer, January 29, 2013
3. Building a New School (1930s) panel
Caption: Castroville Japanese School: parents, students and donors, 1936.
Click on image to enlarge.
the public school to the Japanese school in the afternoon. They studied Japanese language and culture.
November 4, 1936
I don’t understand why we have to go to Japanese school after regular school when other kids are out playing. What’s really hard is we have to go on Saturdays too!

(left panel)
There was a small Japanese business district in Castroville. People in the town mixed to some degree. But there was intolerance and state laws against those born in Japan owning land.
July 8, 1938
I want my children to fit in and learn English and understand American ways. There are people here who don’t like us. I also do not want my children to lose family traditions – my family is still in Japan.

(right panel) Immigrants from all over the world lived in Castroville. The Japanese had a big role in farming in the region, often succeeding where other had failed.
July 8, 1938
In my school kids’ parents come from all over. They come from Italy, Mexico and Portugal, and, of course, America. We all play together and speak English. But my family does a lot with other Japanese.

By Barry Swackhamer, January 29, 2013
4. Life in Castroville (1930s) panel
Caption: Castroville Elementary School, early 1930s.
Click on image to enlarge.
aliens from the coast. In April 1942, with 24-hour notice, all those of Japanese ancestry in Monterey County were ordered to go to the detention center at the Salinas Rodeo Grounds.
April 30, 1942
I’m afraid. I don’t understand what’s happening. We didn’t do anything wrong. Now we have to leave our home and we can only take what we can carry. How do I decide what to take? What will happen to our house, our crops, our belongings?
(right panel)
With the Exclusion Order of April 1942, the Japanese in Castroville had to leave their homes. They didn’t know where they would go, or for how long. Everyone – women and children, citizens and non-citizens – had to go.
April 30, 1942
I don’t want to anywhere! I’m sad about leaving my friends who aren’t Japanese. They can stay home. Why do I have to leave my pet? It’s unfair! I can’t take most of my toys and books.

(left panel)
The government forced 3500 people of Japanese ancestry from the Monterey Bay region to go to the temporary detention center at the Salinas Rodeo Grounds. It became a prison with barbed wire and guards.
June 1, 1942
They gave me tags for my bags and my children – as if my children were baggage! It’s awful here. Dirty, no privacy anywhere and it’s dangerous. I cleaned and made our

By Barry Swackhamer, January 29, 2013
5. Forced from Home (1940s) panel
Captions: The government called the Rodeo Grounds an “Assembly Center.” But the Rodeo Grounds, and other facilities up and down the coast, were actually temporary detention centers. Families with luggage ready to go to the Salinas Rodeo Grounds.
Click on image to enlarge.
barracks a “home” the best I could. We wait in long lines for everything like food, laundry, ad to use the toilets and baths.
(right panel)
Some people at the Rodeo Grounds lived in barracks, others slept in stables. The wall were so thin, they heard their neighbors’ every word. They had no idea how long they’d be there.
June 1, 1942
I’m hungry a lot here. I don’t like the food and eating with all those people. My mother is so sad here. But we don’t have school and I get to play with new friends. What will happen tow us next?

(left panel)
On July 4th, 1942, the Japanese-Americans at the Rodeo Grounds were loaded onto trains and shipped to the Poston, Arizona prison camp. They lived behind barbed wire in the hot desert for most of the war years. They’d lost everything of their former lives.
January 18, 1945
We lived for three years in the dusty desert, in the middle of nowhere with thousands of others far from home. We did nothing wrong. They put us in concentration camps because we had Japanese blood, even if we were citizens.
(right panel)
Some men left camp and fought and died in the war in the all Japanese-American 442nd Regimental Combat Team. Others were allowed to go work in the fields in the Midwest and elsewhere. When the camps closed, the detainees

By Barry Swackhamer, January 29, 2013
6. The Salinas Rodeo Grounds (1942) panel
Caption: Tagged to go to the Salinas Rodeo Grounds.
Click on image to enlarge.
didn’t know what would happen to them.
January 18, 1945
I’m glad to be getting out of that empty desert place – so dusty and full of rattlesnakes! The war made some people think we were the enemy. We’re not! Our soldiers in the 442nd are heroes of the war!

(left panel)
After the war, people had to start their lives all over again. Most had lost everything and had no money. Finding jobs and housing was a big challenge for most families.
April 19, 1952
We didn’t know where to go. Salinas was hard: some people wouldn’t sell us gas or food, or give us a place to live or work. Some went to Monterey where people were friendlier. They worked in canneries or as gardeners. We’re making a new life.
(right panel)
The returning Japanese community met prejudice wherever they went. It was hard to find work and they did any work they could get. Some people offered help and things slowly got easier.
April 19, 1952
It’s hard being back in school. Everything and everyone has changed. Some kids are mean and call us names. Some are nice though. And it gets better. Now I like being with all kinds of different people.

By Barry Swackhamer, January 29, 2013
7. Life in Camp (1942-1943) panel
Caption: Although the government named them “Internment Camps,” they were America’s concentration camps, where those of Japanese ancestry – two-thirds U.S. citizens – were imprisoned during World War II.
Click on image to enlarge.
told all those of Japanese ancestry living in Monterey County to leave their homes.
Families made hard decisions about what to take and what to leave behind. They went to the detention center at the Salinas Rodeo Grounds with fear and uncertainty.

Dedicated as a tribute to the enduring struggle of all immigrants to see their children achieve a better life, have more opportunities and be treated with dignity and respect.

By Barry Swackhamer, January 29, 2013
8. Moving On (1945) panel
Caption: Japanese nursery in Monterey. Yukio and Mollie Sumida at Cypress Gardens Nursery.
Click on image to enlarge.
The First and Second Filipino Infantry Regiments U.S. Army (approx. 7½ miles away); Salinas Temporary Detention Center (approx. 7.6 miles away). Touch for a list and map of all markers in Castroville.

Regarding The Castroville Japanese Schoolhouse. What is a school for but to educate. Even in 'retirement' this schoolhouse continues to teach us; this time about one of the darker incidents of World War II.

Related marker. Click here for another marker that is related to this marker. Salinas Temporary Detention Center Marker

By Barry Swackhamer, January 29, 2013
9. The Order to Leave Home Came in April, 1942 panel
Click on image to enlarge and read the Exclusion Orders.

By Barry Swackhamer, January 29, 2013
10. The Castroville Japanese Schoolhouse Marker
Dedications and credits.Click on image to enlarge. 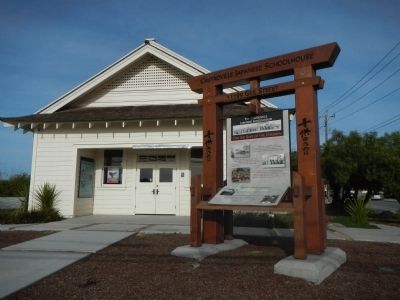 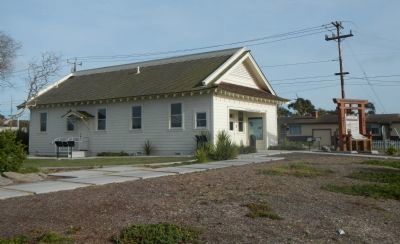