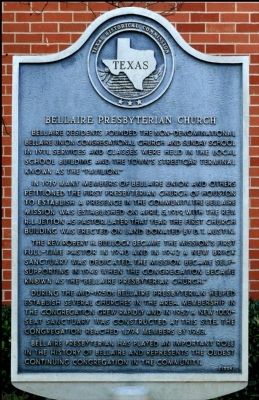 Bellaire residents founded the non-denominational Bellaire Union Congregational Church and Sunday School in 1911. Services and classes were held in the local school building and the town's streetcar terminal known as the “Pavilion.”

In 1919 many members of Bellaire Union and others petitioned the First Presbyterian Church of Houston to establish a presence in the community. The Bellaire Mission was established on April 5, 1919, with the Rev. R.L. Jetton as pastor. Later that year the first church building was erected on land donated by D.T. Austin.

The Rev. Robert H. Bullock became the mission's first full-time pastor in 1940 and in 1942 a new brick sanctuary was dedicated. The mission became self-supporting in 1943 when the congregation became known as the “Bellaire Presbyterian Church.”

During the mid-1950s Bellaire Presbyterian helped establish several churches in the area. Membership in the congregation grew rapidly and in 1957 a new 1000-seat sanctuary was constructed at this site. The congregation reached 1,794 members by 1963.

Bellaire Presbyterian has played an important 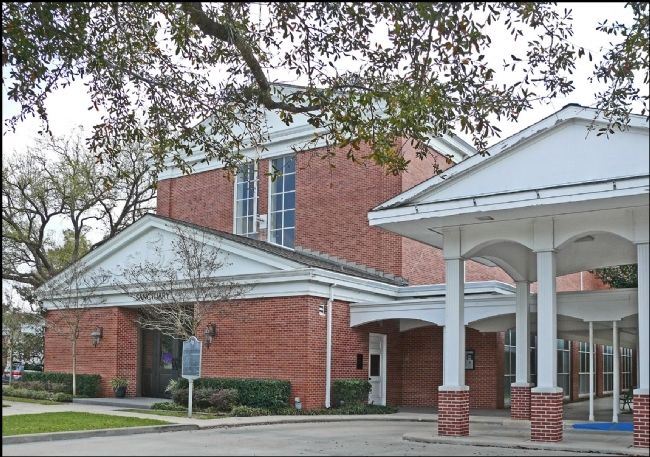 Click or scan to see
this page online
role in the history of Bellaire and represents the oldest continuing congregation in the community.

Topics. This historical marker is listed in this topic list: Churches & Religion. A significant historical month for this entry is April 1821.