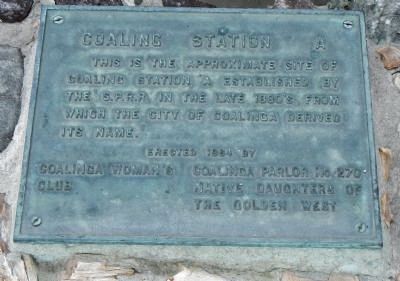 By Barry Swackhamer, March 22, 2013
1. Coaling Station A Marker
Inscription.
Coaling Station A. . . This is the approximate site of Coaling Station A established by the S.P.R.R. in the late 1880’s from which the City of Coalinga derived its name. . This historical marker was erected in 1984 by Coalinga Women’s Club & Native Daughters of the Golden West, Coalinga Parlor No. 270. It is in Coalinga in Fresno County California

This is the approximate site of Coaling Station A established by the S.P.R.R. in the late 1880’s from which the City of Coalinga derived its name.

Topics and series. This historical marker is listed in these topic lists: Industry & Commerce • Railroads & Streetcars. In addition, it is included in the Native Sons/Daughters of the Golden West series list.

Location. 36° 8.267′ N, 120° 21.714′ W. Marker is in Coalinga, California, in Fresno County. Marker is on West Elm Street just east of 7th Street, on the left when traveling west. The marker is mounted on a rock base and is visible to the right of the Coalinga School 1908 sign. Touch for map. Marker is at or near this postal address: 267 West Elm Street, Coalinga CA 93210, United States of America. Touch for directions.

Other nearby markers. At least 8 other markers are within walking distance of this marker. A different marker also named Coaling Station A (a few steps from this marker); Richfield Service Station (about 300 feet away, measured in a direct line); Cheney Bros. Building 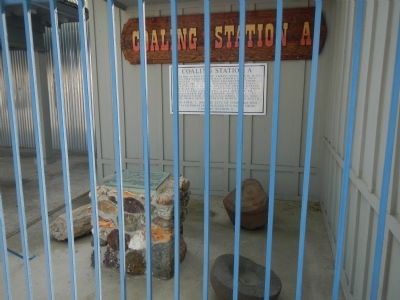 Also see . . .  A Brief History of Coalinga. Located in Fresno County, Coalinga is one of the few cities that began as a mining town, and survived. Oil provided the community with over 100 years of relative prosperity, but it was the discovery of coal that inspired the name, Coalinga, when laid out by Southern Pacific Railroad engineers in 1891. (Submitted on March 24, 2013, by Barry Swackhamer of Brentwood, California.) 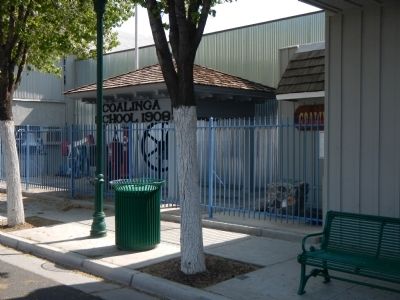