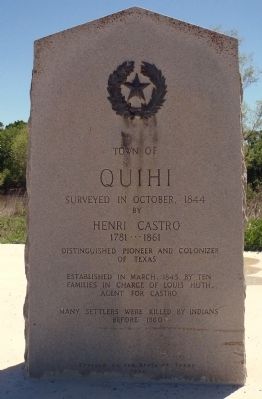 By William F Haenn, April 4, 2013
1. Quihi Marker
Inscription.
Town of Quihi. .
Surveyed in October, 1844 by Henri Castro 1781---1861 Distinguished pioneer and colonizer of Texas. Established in March, 1845 by ten families in charge of Louis Huth, agent for Castro. Many settlers were killed by Indians before 1860. . This historical marker was erected in 1936 by State of Texas. It is in Quihi in Medina County Texas

Surveyed in October, 1844
by
Henri Castro
1781---1861
Distinguished pioneer and colonizer
of Texas

Established in March, 1845 by ten
families in charge of Louis Huth,
agent for Castro

Many settlers were killed by Indians before 1860

Topics and series. This historical marker is listed in this topic list: Settlements & Settlers. In addition, it is included in the San Antonio-El Paso Road, and the Texas 1936 Centennial Markers and Monuments series lists. A significant historical month for this entry is March 1845. 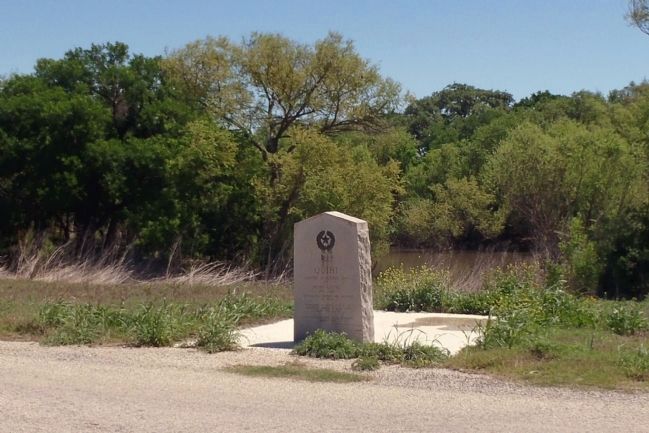 Regarding Town of Quihi. Excerpt from a letter sent to the “Spirit of the Times” newspaper by Brevet Major W.S. Henry, 3rd U.S. Infantry, with the Great Government Train creating the “lower road” from San Antonio to El Paso:

June 6, 1849 – “On the 6th we marched 10 miles and encamped on a creek called Ki hi, amid luxuriant grass and plenty of wood. The face of the country for the first five miles was rolling, covered with a dense growth of mesquite and live oak. You then enter on a rich hog wallow prairie, anything but acceptable to tired teams. There are a few houses on the bank of the creek, which take the name of the village of Ki-hi. The settlement is German, and waving fields of corn give evidence of their industry. The creek was one but in name, for it wanted that gush of waters which is a perfect treat to the weary traveler.”
Credits. This page was last revised on June 16, 2016. It was originally submitted on April 6, 2013, by William F Haenn of Fort Clark (Brackettville), Texas. This page has been viewed 617 times since then and 24 times this year. Photos:   1, 2. submitted on April 6, 2013, by William F Haenn of Fort Clark (Brackettville), Texas. • Bernard Fisher was the editor who published this page.
Share This Page.