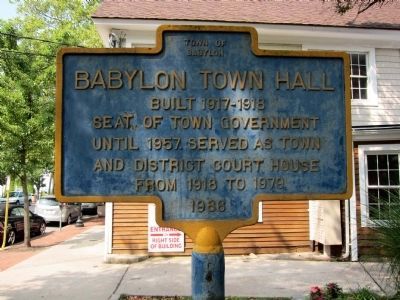 Photographed By Andrew Ruppenstein, August 5, 2010
1. Babylon Town Hall Marker (east-facing side)
Inscription.
Babylon Town Hall. Old Town Hall - Town of Babylon History Museum.
Built 1917-1918 Seat of town government Until 1957. Served as town and district court house from 1918 to 1979 . . This historical marker was erected in 1986 by Town of Babylon. It is in Babylon in Suffolk County New York

Topics. This historical marker is listed in this topic list: Notable Buildings. A significant historical year for this entry is 1957.

Other nearby markers. At least 8 other markers are within walking distance of this marker. Auto Races (within shouting distance of this marker); The Babylon Village Fountain (about 300 feet away, measured in a direct line); Robert Moses (about 600 feet away); The Babylon Library (about 600 feet away); Suffrage Study Club (about 700 feet away); Babylon's Heros World War I Memorial (approx. 0.2 miles away); Captain Joel Cook Monument (approx. ¼ mile away); South Side R.R. (approx. ¼ mile away). Touch for a list and map of all markers in Babylon.

More about this marker. The marker is mounted on a pole, located just to the left of the steps leading up to the building entrance. 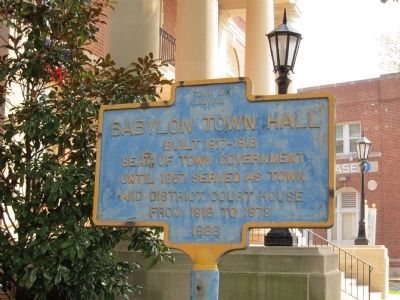 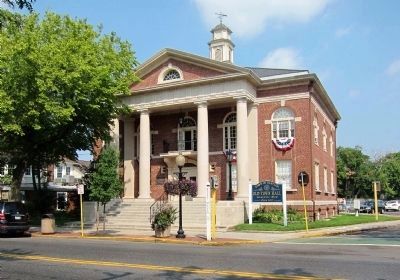 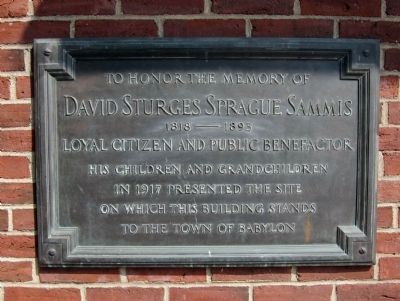 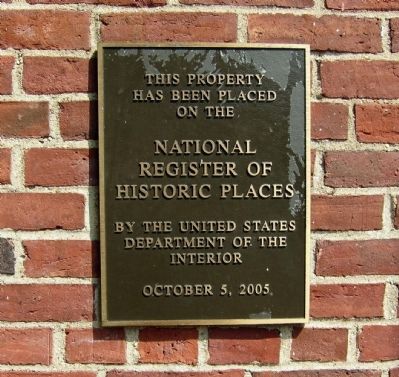 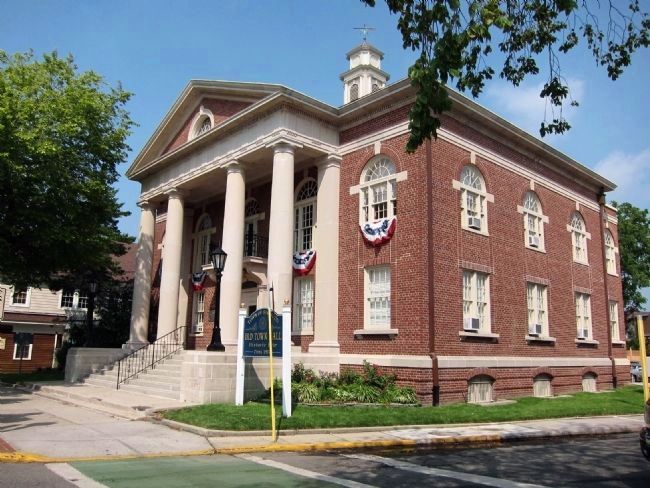 Photographed By Andrew Ruppenstein, August 5, 2010
6. Babylon Town Hall (1917) - View from southeast
From the NRHP statement of significance: Dedicated in 1918, the Babylon Town Hall served the local community as a readily accessible place to house town offices until the mid-twentieth century when the growing town constructed a larger and more centrally located building. In the late 1940's, the Babylon Town Hall also housed the district courts and town jail. After the town offices were moved in 1957 the building continued to accommodate the district courts until 1992 when the historic town hall was sold to a private owner. The Town of Babylon bought back the property in 2004 with the intention of preserving the building and restoring some of its municipal role....The building is still at its original location...and appears much as it did in 1918....
Credits. This page was last revised on June 16, 2016. It was originally submitted on August 14, 2010, by Andrew Ruppenstein of Sacramento, California. This page has been viewed 1,347 times since then and 48 times this year. Last updated on April 23, 2013, by Mary Cascone of Babylon, New York. Photos:   1, 2, 3, 4, 5, 6. submitted on August 14, 2010, by Andrew Ruppenstein of Sacramento, California. • Bill Pfingsten was the editor who published this page.
Share this page.