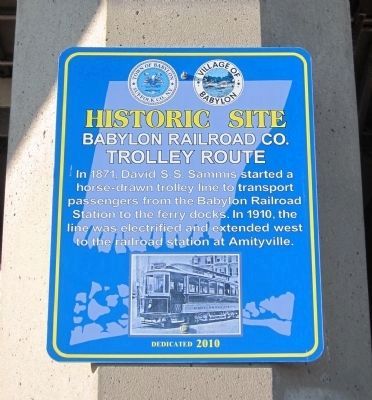 Photographed By Andrew Ruppenstein, February 17, 2013
1. Babylon Railroad Company Trolley Route Marker
Note: the light blue areas on the marker form an outline of the Town of Babylon.
Inscription.
Babylon Railroad Company Trolley Route. Historic Site. , In 1871, David S.S. Sammis started a horse-drawn trolley line to transport passengers from the Babylon railroad station to the ferry docks. In 1910, the line was electrified and extended west to the railroad station at Amityville., Dedicated 2010. . This historical marker was erected in 2010 by Town of Babylon and Village of Babylon. It is in Babylon in Suffolk County New York

In 1871, David S.S. Sammis started a horse-drawn trolley line to transport passengers from the Babylon railroad station to the ferry docks. In 1910, the line was electrified and extended west to the railroad station at Amityville.

Erected 2010 by Town of Babylon and Village of Babylon.

Topics. This historical marker is listed in these topic lists: Railroads & Streetcars • Sports. A significant historical year for this entry is 1871. 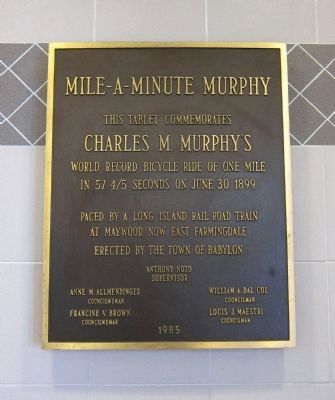 More about this marker. The marker is mounted to the outside wall of the south side entrance to the Babylon Railroad Station.

Regarding Babylon Railroad Company Trolley Route. This is one in a series of markers dedicated in 2010 along the historic trolley route between Amityville and Babylon.

Also see . . .
1. Short Biography of David Sprague Sturgis Sammis. LongIsandGenealogy: David S.S. Sammis, founder of the Babylon Railroad Company:
d. 19 May 1895 at Babylon; Brights disease; son of Daniel Sammis, who served in the War of 1812; father of Joseph M. Sammis and five daughters; proprietor of the Surf Hotel on Fire Island; went into hotel business in New York City in 1848 and in 1856 built a hotel on Fire Island for 100 guests, which he soon enlarged; he introduced gas [lighting ?] and made the hotel first class; sold his interest in New York City hotels in 1858, to devote himself fully to the Surf Hotel and real estate ventures in Babylon; built a street railway for transporting guests from the railroad depot to the steamboat dock at Babylon; served as postmaster at Fire Island; organized the Babylon National Bank and the Babylon Water Company; leader in the incorporation of 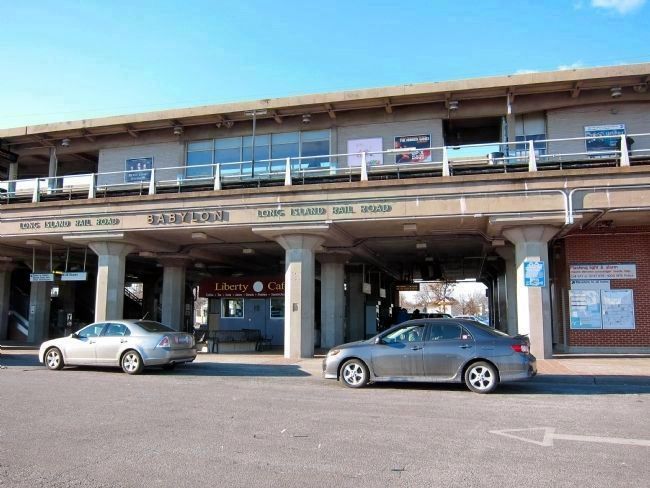 Photographed By Andrew Ruppenstein, February 17, 2013
3. Babylon L.I.R.R. Railroad Station and Babylon Trolley Route Marker
Babylon Station originally opened as a South Side Railroad of Long Island depot on October 28, 1867. It was briefly renamed Seaside station in the summer of 1868, but resumed its original name of Babylon station in 1869. The Central Railroad of Long Island had once planned an extension to the Great South Bay and Fire Island which was never built, and a horse car and later trolley line was provided by the Babylon Rail Road company as a substitute. The second depot opened on July 2, 1881, and was razed in 1963 as part of the grade elimination project that was taking place along the entire Babylon Branch during the post-war era. The new elevated third station opened on September 9, 1964.... - Wikipedia entry for the Babylon (LIRR Station), retrieved 2/18/2013
Babylon Village; sold his hotel property on Fire Island to New York State in 1892 to be used for a cholera quarantine station; this upset the people of Babylon, causing of Governor of New York State to call out two regiments of troops to keep order.... (Submitted on February 19, 2013.)

2. James Grover Reminisces About the Tracks. YouTube video:,br> In this short clip, James Grover (Babylon Village) reminisces about how the trolley tracks ran through town. (Submitted on February 19, 2013.)