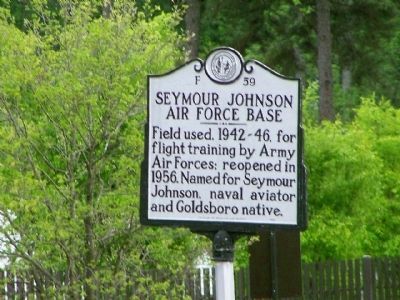 Erected 1995 by Department of Archives and History. (Marker Number F-59.)

Topics and series. This historical marker is listed in these topic lists: Air & Space • Forts and Castles. In addition, it is included in the North Carolina Division of Archives and History series list. A significant historical year for this entry is 1956. 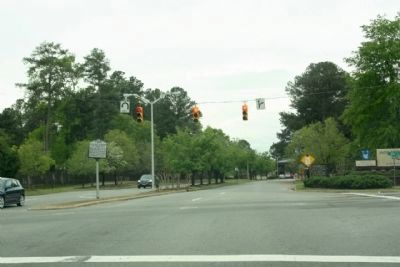 Regarding Seymour Johnson Air Force Base. In 1941 the Works Progress Administration built a new municipal airport south of Goldsboro; the dedication was held one week before the attack on Pearl Harbor. The field was named for Seymour Johnson (1904-1941), a Goldsboro native. Following three years of education at the University of North Carolina and graduation from the U.S. Naval Academy, Johnson entered flight training and received his pilot wings in 1929. In 1936 the Navy assigned him to serve as a test pilot for Grumman Aircraft. Lieutenant Johnson was killed in a single-plane crash in Maryland on April 2, 1941, and was buried in Arlington Cemetery. The Goldsboro News-Argus led the campaign to have the airfield named for Johnson.
In 1942 the U.S. Army Air Force took over Seymour Johnson Field for use as a training center. At the peak of its strength during the war years, the field hosted 27,000 troops. Over the course of the war in excess of 250,000 troops trained there, creating serious overcrowding and housing problems for the area. The 326th Fighter Group arrived in 1943 and in 1944 basic training of F-4 pilots became the primary mission of the base. The Army Air Force at Seymour Johnson prepared the first bombers to penetrate Germany. At the close of the war the field functioned as a separation center. In May 1946 it was deactivated.
On April 1, 1956, the U.S. Air Force reopened the base following a successful campaign by Goldsboro community leaders. The 83rd Fighter Wing was assigned as the primary union to be replaced by the 4th Wing in 1957. In 1959 the base first housed A-59s. Personnel from Seymour Johnson Air Force Base have been deployed in the Cuban missile crisis, in Southeast Asia, and in the Mideast. Today the base is home to the F-15 Strike Eagle. Seymour Johnson is the only Air Force base named for a naval officer. (North Carolina Office of Archives & History — Department of Cultural Resources)
Credits. This page was last revised on August 5, 2021. It was originally submitted on May 20, 2013, by Mike Stroud of Bluffton, South Carolina. This page has been viewed 490 times since then and 42 times this year. Photos:   1, 2. submitted on May 20, 2013, by Mike Stroud of Bluffton, South Carolina.
Share this page.