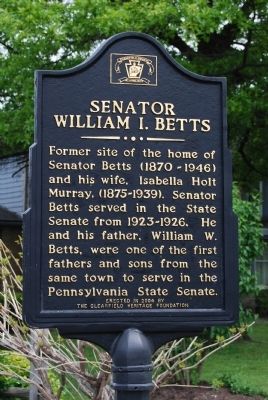 By Jenn Wintermantel, May 27, 2013
1. Senator William I. Betts Marker
Inscription.
Senator William I. Betts. . Former site of the home of Senator Betts (1870-1946) and his wife, Isabella Holt Murray, (1875-1939). Senator Betts served in the State Senate from 1923-1926. He and his father, William W. Betts, were one of the first fathers and sons from the same town to serve in the Pennsylvania State Senate. . This historical marker was erected in 2004 by The Clearfield Heritage Foundation. It is in Clearfield in Clearfield County Pennsylvania

Erected 2004 by The Clearfield Heritage Foundation.

Other nearby markers. At least 8 other markers are within walking distance of this marker. Murray House (about 500 feet away, measured in a direct line); Clearfield County's First Jail (about 600 feet away); Daniel Ogden (approx. 0.2 miles away); The "Public Spirit" (approx. 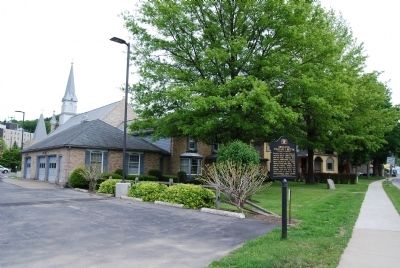