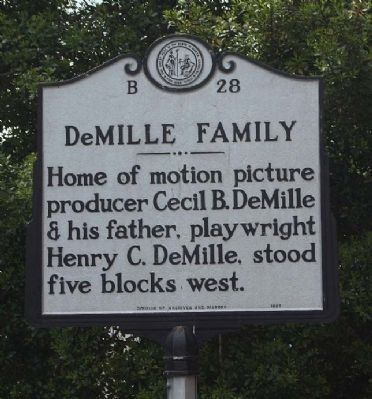 Erected 1987 by Division of Archives and History. (Marker Number B-28.)

Location. 35° 32.56′ N, 77° 3.283′ W. Marker is in Washington, North Carolina, in Beaufort County. Marker is on Market Street, on the right when traveling south. Located between East 2nd Street and East Main Street. Touch for map. Marker is in this post office area: Washington NC 27889, United States of America. Touch for directions. 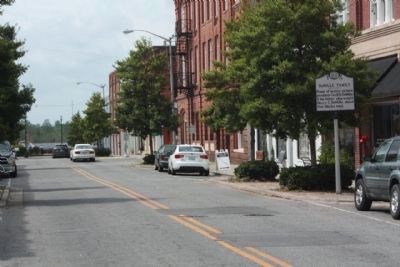 At the conclusion of the war, with the Washington area utterly devastated, deMille was sent to live with his grandfather, Thomas A. deMille. In 1867 he entered Adelphi Academy in Brooklyn, and four years later entered Columbia University. He graduated with A. B. and A. M. degrees in 1875, and taught school at Lockwood Academy and Columbia Grammar School.

Throughout his life, deMille remained devoutly Episcopalian. He briefly considered becoming a clergyman in the late 1870s but instead turned to theater, a passion that had been ignited years previously at Adelphi Academy. From 1886 until his death from typhoid fever in 1893, deMille wrote some of the most popular plays in American history such as The Wife, Lord Chumley, and The Lost Paradise.

DeMille married Matilda Beatrice Samuel at St. Luke’s Church in Brooklyn in 1876. They had a daughter who died in early childhood and two sons, William C. and Cecil B. deMille. William, born on July 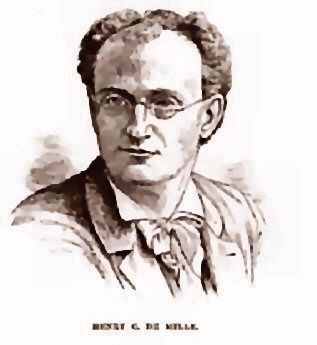 By The American Magazine, Volume 33; 1892:
3. Playwright Henry C. deMille
25, 1878, in Washington, North Carolina, and Cecil, born on August 12, 1881, in Ashfield, Massachusetts (while his mother was vacationing), both followed their father into the entertainment industry. The boys both attended private schools in New Jersey including the Henry C. deMille School named for their father.

In 1895, Matilda took William to Europe while Cecil stayed in America at the Pennsylvania Military School. William spent a year in Freiburg, Germany, studying at a private academy before returning to the United States and entering Columbia University. After graduation he attended the American Academy of Dramatic Arts, and took postgraduate courses at Columbia. In 1902 he returned to teach at the Henry C. deMille School.

William began writing plays in 1901, when he wrote his first work, A Mixed Foursome. Several more plays followed including Strongheart and The Woman. In 1914, William left playwriting and moved from New Jersey to California persuaded by his younger brother to enter the motion picture industry.

Cecil had entered the American Academy of Dramatic Arts while his brother was at Columbia. Like his father and brother, Cecil began his career writing plays and short stories. He helped organize the Standard Opera Company and founded the DeMille Play Company with his mother.

In 1913, Cecil moved to California 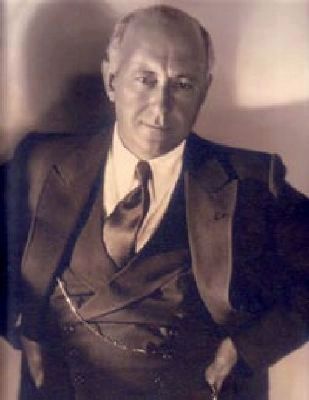 and joined Samuel Goldwyn and Jesse Lasky in founding the Jesse L. Lasky Feature Play Company. Cecil became the senior play director. Five years later the company became the Famous-Players Lasky, and in 1927 became Paramount Pictures after the men realized the profitability of motion pictures. Cecil left the following year to join Metro-Goldwyn-Mayer as a producer and director, but returned to Paramount in 1932.

Over the next forty-three years, Cecil B. deMille produced seventy films including Cleopatra, The Greatest Show on Earth, and The Ten Commandments. During production of the latter work, deMille suffered a heart attack after climbing a 107-foot ladder to the top of the set made to look like Pharaoh Ramses’s temple. Refusing to be sidelined from production, deMille returned to work four days later.

Cecil’s brother William joined him in the motion picture industry, producing and directing nearly sixty films. During the 1920s, William served as president of the Academy of Motion Picture Arts and Sciences of which is brother Cecil was a founding member. In the 1940s he took an academic position as head of the drama department at the University of Southern California.

Both brothers were active politically, and defended freedom of speech within the motion picture industry. Cecil was censured from American radio from 1936 to1945 for refusing 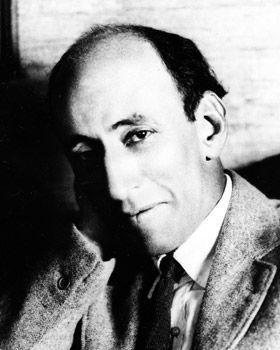 William C. deMille died on March 5, 1955, and was buried in Hollywood, leaving a widow and two children from a previous marriage. Cecil died four years later on January 21, 1959, of congestive heart failure. At the time he was negotiating the directing rights to Ben-Hur. He is buried near his brother in Hollywood. He left a wife and three children. The Golden Globes Lifetime Achievement Award is named in his honor. Both men have stars on the Hollywood Walk of Fame. (North Carolina Office of Archives & History — Department of Cultural Resources)

Also see . . .
1. Henry Churchill de Mille. from Wikipedia. a noted American playwright and the father of film pioneers Cecil B. de Mille and William C. de Mille and the grandfather of the dancer and choreographer Agnes de Mille. (Submitted on May 29, 2013, by Mike Stroud of Bluffton, South Carolina.)

2. Los Angeles Times- Cecil B. DeMille. He introduced effect lighting, the camera boom, the soundproof camera and color. (Submitted on May 30, 2013, by Mike Stroud of Bluffton, South Carolina.)

By LA Times
6. Cecil B.DeMille Star on Hollywood's Walk of Fame
. was a playwright, motion-picture producer and director and founder of the drama department at the University of Southern California. He was the brother of Cecil B. DeMille, the screen director and producer. (Submitted on May 30, 2013, by Mike Stroud of Bluffton, South Carolina.)