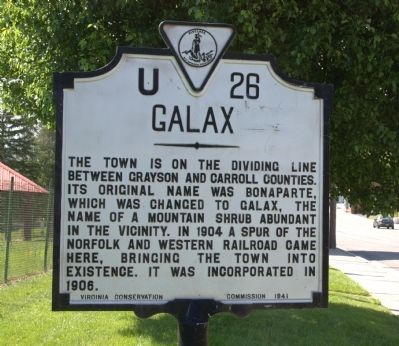 By J. J. Prats, May 26, 2013
1. Galax Marker
Inscription.
Galax. . The town is on the dividing line between Grayson and Carroll Counties. Its original name was Bonaparte, which was changed to Galax, the name of a mountain shrub abundant in the vicinity. In 1904 a spur of the Norfolk and Western Railroad came here, bringing the town into existence. It was incorporated in 1906. . This historical marker was erected in 1941 by Virginia Conversation Commission. It is in Galax Virginia

The town is on the dividing line between Grayson and Carroll Counties. Its original name was Bonaparte, which was changed to Galax, the name of a mountain shrub abundant in the vicinity. In 1904 a spur of the Norfolk and Western Railroad came here, bringing the town into existence. It was incorporated in 1906.

Topics and series. This historical marker is listed in this topic list: Political Subdivisions. In addition, it is included in the Virginia Department of Historic Resources series list. A significant historical year for this entry is 1904.

Other nearby markers. At least 8 other markers are within 7 miles of this marker, measured as the crow flies. Galax: Home of Traditional Mountain Music (approx. 0.4 miles away); The Railroad: Lifeline to the World (approx. 0.7 miles away); a different marker also named Galax 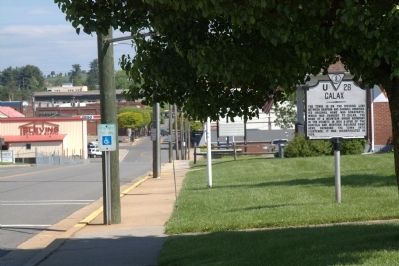 Also see . . .  Wikipedia Entry. “Located in the Appalachian region of the United States, Galax has long been famous for its traditional, or ‘old-timey’ music and musicians. Although the entire Appalachian region is known for its music, the region around Mount Airy, North Carolina and Galax is one of the few areas of the United States where this music has remained strongest, even among young people. The Old Fiddlers’ Convention, one of the most prominent traditional music contests in the United States, has been held annually in Galax since 1935. It has long attracted the best up-and-coming musicians in the bluegrass firmament. The Blue Ridge Music Center with its amphitheather and music museum of old-time music is just a few miles away on the Blue Ridge Parkway at Milepost 213. 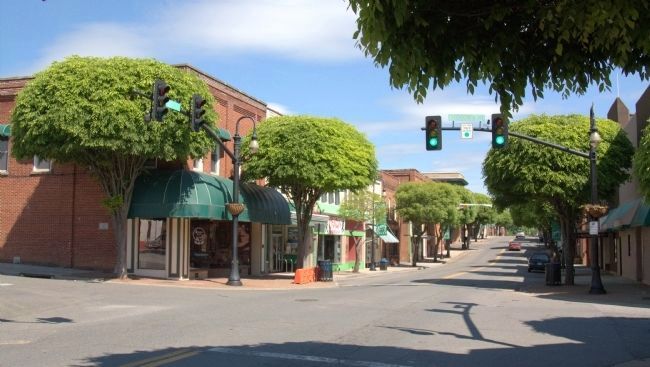 By J. J. Prats, May 26, 2013
3. Downtown Galax
South Main street at Oldtown Street.
an abundant water supply for the city as well as furnishing an early source of power. The Norfolk and Western Railway extended a spur into the village, then called Blairs, with the first train arriving in 1904. The town itself was incorporated in 1906. It was named after Galax, an evergreen plant growing in the area.[6] The railroad provided both freight and passenger transportation that facilitated the growth of industry and provided many of the necessities of life for the people. The manufacture of furniture, textiles, mirrors, garments, and hardwood flooring formed the economic backbone for the area. The processing of condensed milk also enabled many small farms to sell limited quantities of milk that were processed in Galax.

“During the 1950s, Galax chose to separate from the two counties into whose territory it extended and became an independent city. That status fueled initial economic growth and provided a strong tax base for a number of years. While cooperating with both Grayson and Carroll Counties, Galax was able to chart an independent course to better respond to the needs of its citizens. With the decline in economy, Galax has seen the closing of all but one of its furniture factories leaving much of the population unemployed. Galax has been claimed as the ‘bluegrass capital of the world’.” (Submitted on June 3, 2013.) 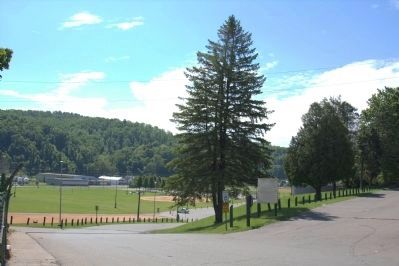 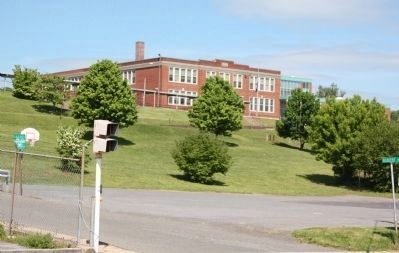 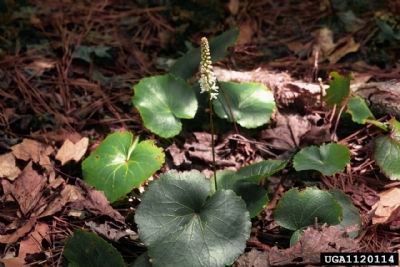 By Ted Bodner, Southern Weed Science Society, Bugwood.org, May 13, 2005
6. Galax Urceolata—Galax Leaf
From Wikipedia entry: Galax (Wandplant, Wandflower, or Beetleweed) is a genus in the flowering plant family Diapensiaceae, containing a single species, Galax urceolata (syn. G. rotundifolia, G. aphylla). It is native to the southeastern United States from Massachusetts and New York south to northern Alabama, growing mainly in the Appalachian Mountains at altitudes of up to 1,500 m, where it grows in shaded places in forests. . . . The leaves are often harvested for the floristry industry. . . (Photo courtesy of Wikimedia Commons.)
Credits. This page was last revised on April 16, 2017. It was originally submitted on June 3, 2013, by J. J. Prats of Powell, Ohio. This page has been viewed 615 times since then and 17 times this year. Photos:   1, 2, 3, 4, 5, 6. submitted on June 3, 2013, by J. J. Prats of Powell, Ohio.
Share This Page.