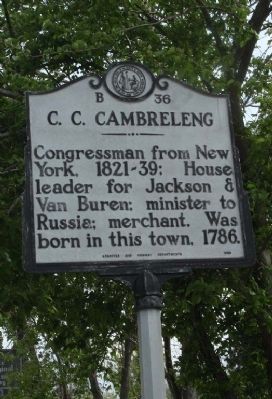 Photographed By Mike Stroud, April 19, 2013
1. C. C. Cambreleng Marker
Inscription.
C. C. Cambreleng. . Congressman from New York, 1821-39; House leader for Jackson and Van Buren; minister to Russia; merchant. Was born in this town, 1786. . This historical marker was erected in 1956 by Archives and Highway Departments. It is in Washington in Beaufort County North Carolina

Erected 1956 by Archives and Highway Departments. (Marker Number B-36.)

Topics and series. This historical marker is listed in these topic lists: Government & Politics • Industry & Commerce. In addition, it is included in the Former U.S. Presidents: #08 Martin Van Buren, and the North Carolina Division of Archives and History series lists. A significant historical year for this entry is 1786.

Location. 35° 32.714′ N, 77° 3.624′ W. Marker is in Washington, North Carolina, in Beaufort County. Marker is on Bridge Street (U.S. 17), on the right when traveling north. Located between West Main and West 2nd Streets. Touch for map. Marker is in this post office area: Washington NC 27889, United States of America. Touch for directions. 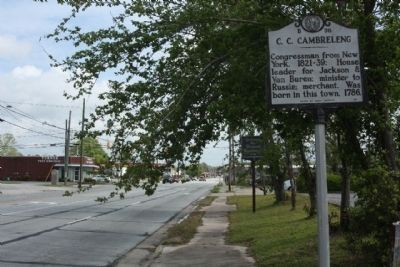 Regarding C. C. Cambreleng.   Churchhill Caldom Cambreleng, U.S. Congressman and diplomat, was born on October 24, 1786 in Washington, North Carolina. Very little is known about the early life besides his attendance at a New Bern school. Cambreleng moved to New York in 1802 where he became an associate to America’s first millionaire, John Jacob Astor. He traveled abroad extensively as Astor’s representative. After the incorporation of the Saratoga and Schenectady Railroad Company in 1831, he became its first president. He also served as the first director of the Farmers Fire Insurance and Loan Company.

Cambreleng’s leadership experiences were important to his involvement in New York state and United States politics. In 1821, he was elected to the U. S. House of Representatives. While there, he was a principle spokesman for Presidents Andrew Jackson and Martin Van Buren on 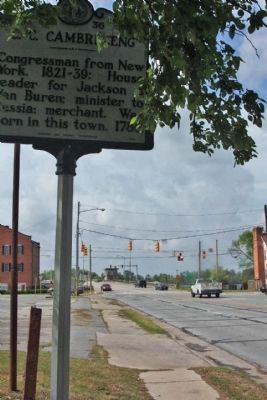 Photographed By Mike Stroud, April 19, 2013
3. C. C. Cambreleng Marker looking south on Bridge Street
the floor of the House. During his legislative term, he supported Jackson’s stand on the United States Bank and opposed the tariffs of 1824 and 1828. He also served as the chairman of the Ways and Means, Commerce, and Foreign Affairs committees. The New York congressman lost his seat in the 1838 election and returned to private life for a short time before President Van Buren appointed him minister to Russia in 1840.

When his Russian appointment expired in 1841, he never held another public office, but remained involved in politics. By the election of 1848, the Democratic Party in New York had split into two factions: the Hunkers and Barnburners. Cambreleng and Van Buren were members of the more liberal Barnburners who opposed the extension of slavery, expansion of the public debt, and the influence of large corporations. Refusing to back the Democrats 1848 presidential candidate, Cambreleng oversaw the Barnburner convention in New York, which paved the way for Van Buren’s presidential nomination at the Free-Soil Party Convention. Cambreleng’s loyalties returned to the Democratic Party for the 1852 election of Franklin Pierce. After that election, he retired from business and politics to his home in West Neck on Long Island. He died on April 30, 1862, and was buried in Greenwood Cemetery in Brooklyn.
(North Carolina Office of Archives & History — Department of Cultural Resources)
Credits. This page was last revised on June 22, 2021. It was originally submitted on June 10, 2013, by Mike Stroud of Bluffton, South Carolina. This page has been viewed 416 times since then and 25 times this year. Photos:   1, 2, 3. submitted on June 10, 2013, by Mike Stroud of Bluffton, South Carolina.
Share this page.