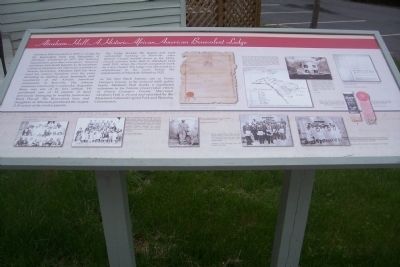 Abraham Hall was built in 1889 as a lodge for the Benevolent Sons and Daughters of Abraham. Chartered in 1877, this fraternal organization provided emergency financial assistance and death benefits to its members: a form of insurance not otherwise available to African Americans. Abraham Hall has been used for various functions over the years including as meeting place, landmark, and touchstone of the African American community of Rossville. The African American community’s namesake, Augustus Ross, was one of its first settlers. He purchased one of 12 parcels of land previously belonging to wealthy landowner Mark Duvall. The Benevolent Sons and Daughters of Abraham purchased the largest (3.85 acres) of the twelve parcels.

The Lodge became the largest and most substantial building in Rossville. After Queens Chapel burned down in the 1890s, church services were held in Abraham Hall until 1901, when the church completed work on a new chapel. The Lodge was also used as a schoolhouse in the years before the construction of Muirkirk School in 1922. 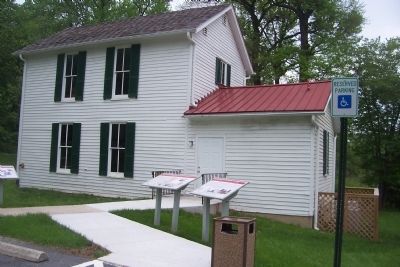 By Richard E. Miller, May 8, 2009
2. Abraham Hall: A Historic African American Benevolent Lodge Marker
The marker is second from the right, in front of Abraham Hall.

Click or scan to see
this page online
funds, Abraham Hall marks a significant milestone in the historic preservation efforts of Prince George’s County, Maryland. Abraham Hall is owned and operated by the Maryland-National Capital Park and Planning Commission.

Abraham Hall was built in 1889 by members of the Rebecca Lodge of the Benevolent Sons and Daughters of Abraham. It was one of the most prominent buildings in Rossville, a community largely inhabited by African American employees of the Muirkirk Ironworks and their families.

Badge from Naomi’s Household of Ruth, women’s auxiliary of the Grand United Order of Odd Fellows, which held meetings at Abraham Hall. Courtesy of Edna Ross

Badge from the Rebecca Lodge #6 of the Benevolent Sons and Daughters of Abraham. Courtesy of Edna Ross

In 1864 slave statistics for the State of Maryland, Prince George’s County, Augustus Ross was 18 years of age and listed as a slave to Walter W. W. Bowie. Courtesy of the Maryland State Archives

Photo of Muirkirk School students circa 1925. The Muirkirk School replaced the Freedman’s Bureau School operated by Charles Coffin when it opened in 1922. It was built with the financial assistance of the Rosenwald Fund, a fund created to help communities build schools for African American children. Muirkirk iron worker William William Toliver was among the Rossville residents who served on the school’s building committee. Courtesy of Philip Gibson

Erected 2008 by Department of Parks and Recreation, Prince George's County.

Topics and series. This historical marker is listed in these topic lists: African Americans • Fraternal or Sororal Organizations • Notable Buildings • Settlements & Settlers. In addition, it is included in the Rosenwald Schools 🎓 series list. A significant historical year for this entry is 1889.

Location. 39° 3.552′ N, 76° 52.398′ W. Marker is near Beltsville, Maryland, in Prince George's County. Marker can be reached from Old Muirkirk Road. Marker is off the parking lot for the recently restored Abraham Hall community center, one block north of Muirkirk Road, across the street from Muirkirk Neighborhood Park, and about half a mile east of Old Baltimore Pike. Note that Muirkirk Road is not directly accessible from U.S.Hwy.1, the area's primary north-south thoroughfare). Travelers on Hwy.1 should turn east at Powder Mill Road (MD 201) in Beltsville, crossing the B&O RR tracks, to reach Old Baltimore Pike and then proceed north to Muirkirk Road. Touch for map. Marker is at or near this postal address: 7612 Old Muirkirk Road, Beltsville MD 20705, United States of America. Touch for directions.