Frontier Columbus on the Suwannee River 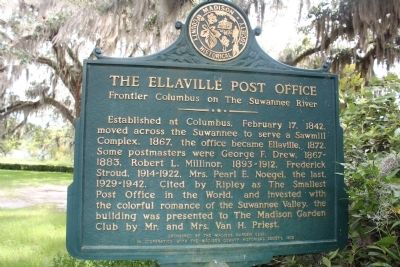 By Tim Fillmon, July 31, 2013
1. The Ellaville Post Office Marker
Inscription.
The Ellaville Post Office. Frontier Columbus on the Suwannee River. Established at Columbus, February 17, 1842, moved across the Suwannee to serve a Sawmill Complex, 1867, the office became Ellaville, 1872. Some postmasters were George F. Drew, 1867-1883, Robert L. Millinor, 1893-1912, Frederick Stroud, 1914-1922, Mrs. Pearl E. Noegel, the last, 1929-1942. Cited by Ripley as The Smallest Post Office in the World, and invested with the colorful romance of the Suwannee Valley, the building was presented to The Madison Garden Club by Mr. and Mrs. Van H. Priest. . This historical marker was erected in 1972 by The Madison Garden Club in cooperation with the Madison County Historical Sociiety. It is in Madison in Madison County Florida

Erected 1972 by The Madison Garden Club in cooperation with the Madison County Historical Sociiety. 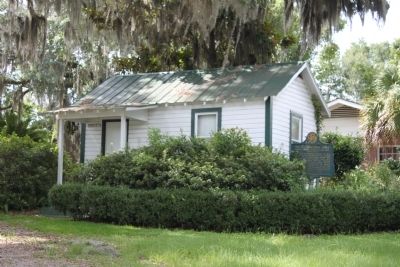