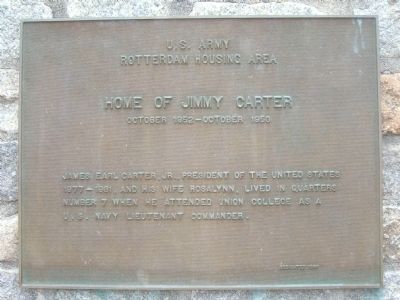 By Howard C. Ohlhous, March 27, 2008
1. Home of Jimmy Carter - Rotterdam, New York
Inscription.
Home of Jimmy Carter. .
U.S. Army Rotterdam Housing Area, Home of Jimmy Carter October 1952 - October 1953 , James Earl Carter, Jr., President of the United States 1977-1981, and his wife Rosalynn, lived in Quarters Number 7 when he attended Union College as a U.S. Navy Lieutenant Commander.. . This historical marker was erected in 1986 by Members of the US Military. It is in Rotterdam in Schenectady County New York

James Earl Carter, Jr., President of the United States 1977-1981, and his wife Rosalynn, lived in Quarters Number 7 when he attended Union College as a U.S. Navy Lieutenant Commander.

Erected 1986 by Members of the US Military.

Topics and series. This historical marker is listed in this topic list: Education. In addition, it is included in the Civilian Conservation Corps (CCC) 🏞️, and the Former U.S. Presidents: #39 James Earl "Jimmy" Carter, Jr. series lists. A significant historical year for this entry is 1952.

Location. 42° 47.299′ N, 73° 59.033′ W. Marker is in Rotterdam, New York, in Schenectady County. Marker can be reached from un-named cul-de-sac off of Duanesburg Road. The marker is located in the grassy center of the loop at the end of an the cul-de-sac in a former military housing area. The cul-de-sac has no street sign nor does it have a name on any current maps. The cul-de-sac 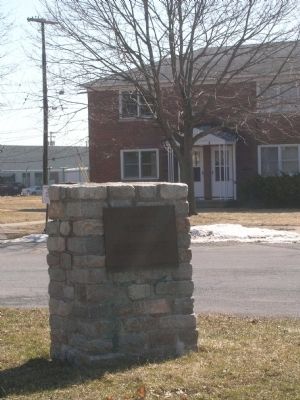 By Howard C. Ohlhous, March 30, 2008
2. Jimmy Carter Home Plaque on Stone Base
The housing unit that Carter occupied was unit 7, seen in the background to the right of the marker.

Click or scan to see
this page online
is off of Duanesburg Road (NYS Route 7) approximately two tenths of a mile to the west of a busy intersection known locally as "5-Corners", and lies to the left (south) as you travel west on Duanesburg Road away from 5 Corners. Touch for map. Marker is in this post office area: Schenectady NY 12306, United States of America. Touch for directions.

Regarding Home of Jimmy Carter. The Carter Family was too poor to afford a four-year college education for Jimmy, so he decided at an early age that he wanted to attend the U.S. Naval Academy where the government would provide an education. He began Naval Academy training in 1943 and was commissioned in 1946 and later spent about three years in submarine service. When the navy began building atomic-powered submarines Carter applied to the program. In 1952 he was assigned as an engineering officer of the U.S.S. Sea Wolf, then under construction. As part of his assignment he took graduate courses in nuclear physics 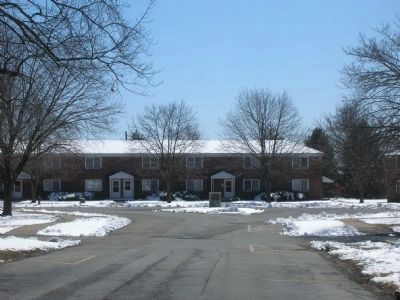 By Howard C. Ohlhous, March 30, 2008
3. Rotterdam Government Housing Complex
The marker is in the middle of the photo. Though no one lives here both the streets and sidewalks have had the snow cleared away.
and reactor technology at Union College in Schenectady, NY. While attending school he lived in the nearby military housing in Rotterdam, NY. The community of Rotterdam, located in the Town of Rotterdam, is a suburb of, and lies just to the west of, the City of Schenectady, New York. Carter lived with his wife, Rosalynn in Apartment 7 of Building 471 of the government housing complex from October of 1952 until October of 1953. After his term as 39th president from in 1977 to 1981, military officials erected a stone marker and plaque in the center of the complex to denote his stay.

The property was initially developed by the Federal Housing Authority in 1951, with apartments leased to military personnel and civilians working for the armed forces. The year after the 52-unit development known as Mohawk Manor opened, Carter, then a young lieutenant commander in the Navy moved into apartment 7 in Building 471 with his wife, Rosalynn. The adjacent depot was constructed in 1918 and served the Army during the later months of WWI. After 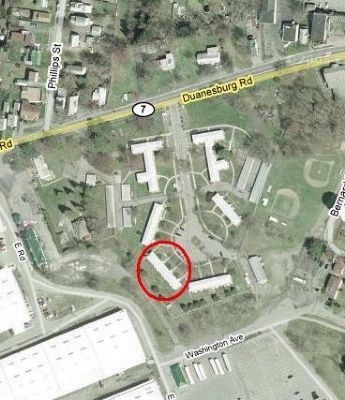 By Google Maps
4. Military Housing Complex, Rotterdam, NY
The former military housing complex is south of Route 7 in Rotterdam, NY. The unit occupied by Carter and his wife is in the red circle above.
the war it was used as a supply depot for 55 Civilian Conservation Corps Camps. In 1941 the depot was expanded and renamed Service Forces Depot. Mostly the depot shipped motor vehicles to the Port of New York. At its peak it employed 4000 people. Late in WWII it was renamed again to General Depot. From January 1948 to March 1949 it was a processing station for war dead. In the post war years it was again renamed Army Depot. It was expanded again during the Korean War. The depot continued operations for a number of years after Korea and then was closed. The housing area has no residents, and has been empty since before the sale with the last military families moving out during July of 2006. 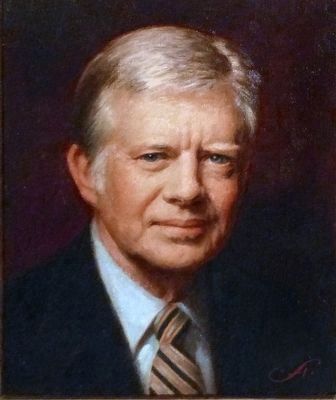 By Allen C. Browne, August 9, 2015
5. Jimmy Carter
This 1982 portrait of Jimmy Carter by Herbert E. Abrams can be found in the National Portrait Gallery in Washington, DC.

“Elected in 1976, Jimmy Carter offered a new face to the White House with his ‘can-do’ attitude and conservative populism. He sat for his White House portrait in 1982 in Plains Georgia, after he left office. This is the preliminary life study.