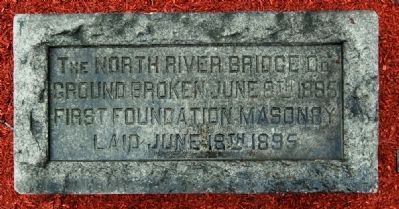 Location. 40° 44.671′ N, 74° 1.506′ W. Marker is in Hoboken, New Jersey, in Hudson County. Marker is directly in front of the library on The Stevens Institute of Technology. Touch for map. Marker is at or near this postal address: Castle Point on the Hudson, Hoboken NJ 07030, United States of America. Touch for directions.

Regarding Hudson River Bridge Cornerstone. According to the Director of the Hoboken Museum, 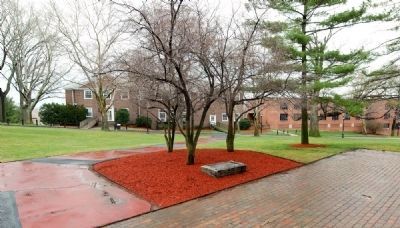 By R. C.
2. The Hudson River Bridge Cornerston
Viewed from front doors of The Stevens Institute of Technology Library.
this stone was probably at the northwest corner of 12th and Garden Streets.

Also see . . .
1. Planning the First Hudson River Crossing. "Ground was broken for the bridge on June 8, 1895, and the first foundation masonry was laid at the site of the Hoboken anchorage, across the Hudson River from West 23rd Street in Manhattan. Work did not progress much further because of the difficulties in financing the $37 million cost of the project." (Submitted on April 7, 2008, by Kevin W. of Stafford, Virginia.)

3. Hoboken Museum. While this link contains little historical information applicable to this marker, The Hoboken Museum has a plethora of information about Hoboken and is definitely worth a visit. (Submitted on April 7, 2008, by R. C. of Shrewsbury, New Jersey.)