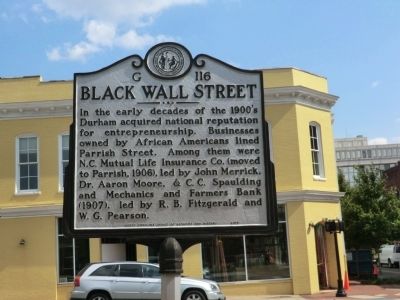 Photographed By Don Morfe, September 16, 2013
1. Black Wall Street Marker
Inscription.
Black Wall Street. . In the early decades of the 1900's Durham acquired national reputation for entrepreneurship. Businesses owned by African Americans lined Parrish Street. Among them were N.C. Mutual Life Insurance Co. (moved to Parrish, 1906), led by John Merrick. Dr. Aaron Moore, and C.C. Spaulding and Mechanics and Farmers Bank (1907), led by R.B. Fitzgerald and W.G. Pearson. . This historical marker was erected in 2004 by North Carolina Office of Archives and History. It is in Durham in Durham County North Carolina

Topics and series. This historical marker is listed in these topic lists: African Americans • Industry & Commerce. In addition, it is included in the North Carolina Division of Archives and History series list.

Other nearby markers. At least 8 other markers are within walking distance of this marker. A Legacy of Community and Institutional Connections (a few steps from 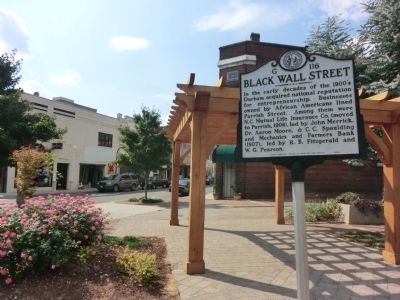 Click or scan to see
this page online
this marker); Financial and Professional Impact in Durham (a few steps from this marker); A Black Capital for the World to See (within shouting distance of this marker); Tobacco and E.J. Parrish (about 300 feet away, measured in a direct line); Visionary Leadership in the New South (about 400 feet away); Empowering and Diverse Opportunities (about 500 feet away); Dedicated to Those who Served in the World War (about 600 feet away); Roll of Honor (about 600 feet away). Touch for a list and map of all markers in Durham.
Credits. This page was last revised on June 25, 2021. It was originally submitted on November 4, 2013, by Don Morfe of Baltimore, Maryland. This page has been viewed 617 times since then and 10 times this year. Photos:   1, 2. submitted on November 4, 2013, by Don Morfe of Baltimore, Maryland. • Bernard Fisher was the editor who published this page.
Share this page.