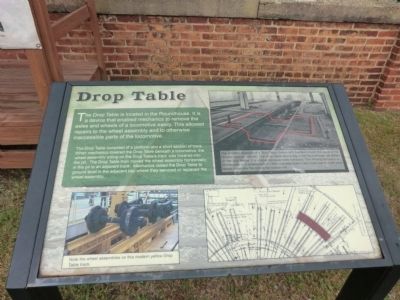 The Drop Table is located in the Roundhouse. It is a device that enabled mechanics to remove the axles and wheels of a locomotive easily. This allowed repairs to the wheel assembly and to otherwise inaccessible parts of the locomotive.

(upper right) The modern example of a Drop Table (below left) functions much the same as its historic version (above). The Drop Table sits in the Roundhouse as shown on the plan below. It is unique because it still functions. The Whiting company, Midwestern firm established in 1884, manufactured it and continues to make drop tables today like the one at the bottom left. 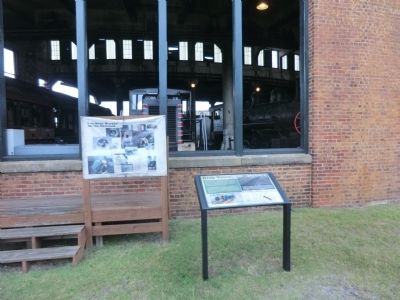 By Don Morfe, September 22, 2013
2. Drop Table Marker
32° 4.517′ N, 81° 6.117′ W. Marker is in Savannah, Georgia, in Chatham County. Marker can be reached from Louisville Road 0.2 miles east of West Boundary Street, on the right when traveling east. The marker is located on the grounds of the Georgia State Railroad Museum. Touch for map. Marker is at or near this postal address: 655 Louisville Road, Savannah GA 31401, United States of America. Touch for directions.