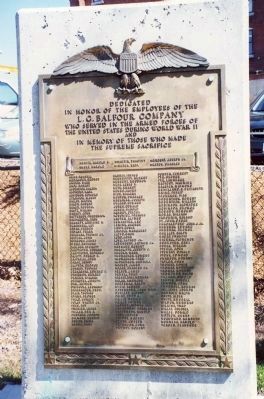 Dedicated In Honor of the Employees of the L.G. Balfour Company Who Served in the Armed Forces of The United States During World War II and In Memory of Those Who Made The Supreme Sacrifice

Location. 41° 56.65′ N, 71° 17.083′ W. Marker is in Attleboro, Massachusetts, in Bristol County. Located at the right entrance to the Balfour Riverwalk Park which is the location of the former world famous L.G. Balfour Jewelry Company and factory. Touch for map. Marker is at or near this postal address: 24 County St, Attleboro MA 02703, United States of America. Touch for directions.