Site of Log House Built in 1818 by Reuben Wilson 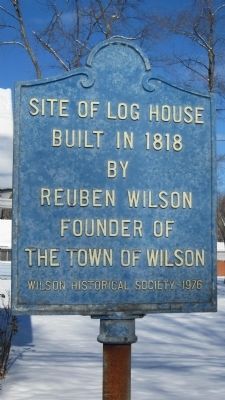 Topics. This historical marker is listed in these topic lists: Notable Buildings • Settlements & Settlers. A significant historical year for this entry is 1818. 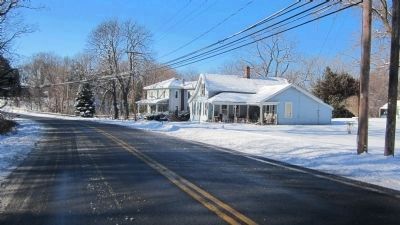 Photographed By Anton Schwarzmueller, November 29, 2013
2. Westbound View of Marker and House
The guard rail in the distance is the bridge over Twelve Mile Creek.

Regarding Site of Log House Built in 1818 by Reuben Wilson. Reuben Wilson, founder of the Town of Wilson, built a cabin and moved here in 1818 from his original cabin on East Lake Road. He had purchased a sawmill two years earlier that was very near this site. Also in 1818, he was appointed justice of the peace, presiding over the first town election on April 6, 1819. He was elected Supervisor and served ten years. Circa 1825 he built this frame house of two stories including some walls of the cabin. He built a grist mill which halted the practice of settlers taking their wheat across Lake Ontario to Port Hope in Canada to be ground into flour.

Please see the Wilson Historical Society link below for more information about Reuben Wilson and this site.

This house is now in the Village of Wilson, incorporated 1858. 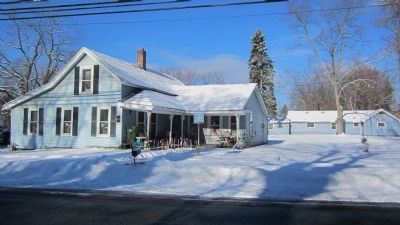