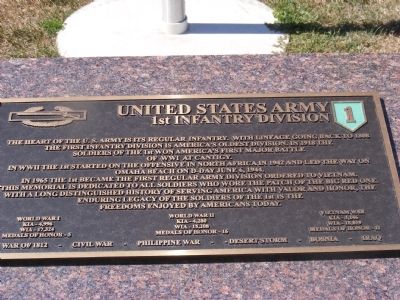 The heart of the U.S. Army is its regular infantry, with lineage going back to 1808. The First Infantry Division is America’s oldest division. In 1918 the soldiers of the 1st won America’s first major battle of WWI at Cantigy.

In 1964 the 1st became the first regular army division ordered to Vietnam.

This Memorial is dedicated to all soldiers who wore the patch of the Big Red One. With a long distinguished history of serving America with valor and honor, the enduring legacy of the soldiers of the 1st is the freedom enjoyed by Americans today. 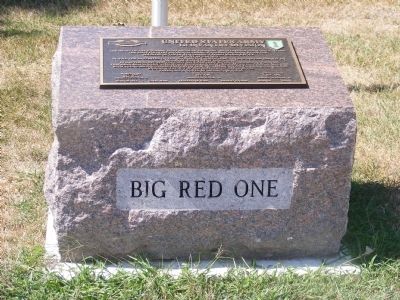 By Don Morfe, August 25, 2008
2. United States Army 1st Infantry Division Marker
13.333′ W. Marker is in Minneapolis, Minnesota, in Hennepin County. Memorial is on Klanska Drive near Covill Drive. The marker is located in Fort Snelling National Cemetery, which may be accessed from 34th Avenue, South at Labelle Drive. Touch for map. Marker is at or near this postal address: 7601 34th Avenue, South, Minneapolis MN 55450, United States of America. Touch for directions.

Other nearby markers. At least 8 other markers are within 3 miles of this marker, measured as the crow flies. Four Marine Raider Battalions Memorial (about 500 feet away, measured in a direct line); Fourth Marine Division Memorial (about 800 feet away); Rodney J. Putz (approx. 1.2 miles away); Fort Snelling 1861–1946 (approx. 2 miles away); Mendota Work Camp No. 1 (approx. 2.4 miles away); Whiskey (approx. 2.6 miles away); Elizabeth R. Snelling (approx. 2.6 miles away); Giacomo Constantino Beltrami (approx. 2.6 miles away). Touch for a list and map of all markers in Minneapolis.
Credits. This page was last revised on June 16, 2016. It was originally submitted on December 28, 2013, by Don Morfe of Baltimore, Maryland. This page has been viewed 512 times since then and 16 times this year. Photos:   1, 2. submitted on December 28, 2013, by Don Morfe of Baltimore, Maryland. • William J. Toman was the editor who published this page.

Editor’s want-list for this marker. Wide view of marker. • Can you help?
Share This Page.