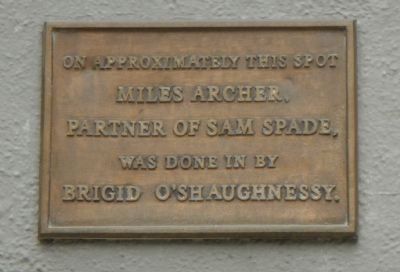 On approximately this spot
Miles Archer,
partner of Sam Spade,
was done in by
Brigid O’Shaughnessy

Regarding Miles Archer. “A ten-foot length of the fence’s top rail had been 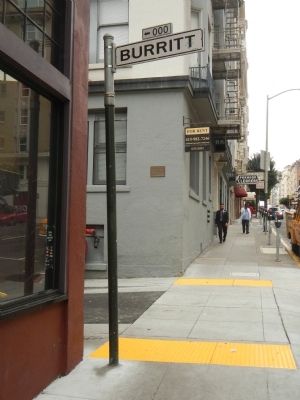 Click or scan to see
this page online
torn from a post at one end and hung dangling from the other. Fifteen feet down the slope a flat boulder stuck out. In the notch between boulder and slope Miles Archer lay on his back. Two men stood over him. One of them held the beam of an electric torch on the dead man.” – The Maltese Falcon by Dashiell Hammett

By Barry Swackhamer
3. The Maltese Falcon 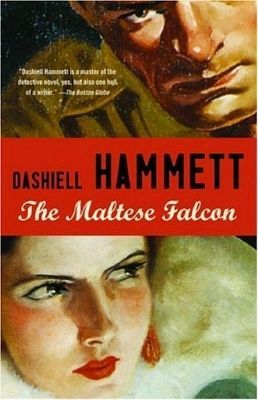 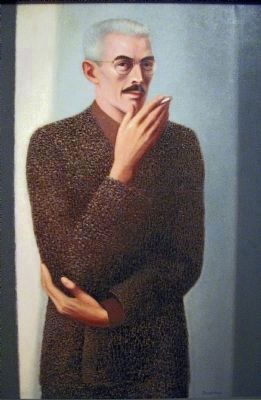 “Inspired to try his hand at writing mysteries after his years with the Pinkerton Detective Agency, Dashiell Hammett met a warm reception when he published his first two detective novels in 1929. But it was the appearance of The Maltese Falcon, a year later that secured him his reputation as one of America's most original mystery writers. The hardbitten realism and crisp dialogue of that work led critics to compare its author's style to that of Ernest Hemingway. Hammett's later books, The Thin Man and The Glass Key, drew similar accolades. In defining the main difference between Hammett's works and the far more common drawing-room detective stories of the period, one admirer observed that Hammett had taken murder ‘out of the Venetian vase and dropped it into the alley,’ where, after all, it more generally Occurred in real life.” — National Portrait Gallery
Credits. This page was last revised on June 16, 2016. It was originally submitted on February 11, 2014, by Barry Swackhamer of Brentwood, California. This page has been viewed 552 times since then and 16 times this year. Photos:   1, 2, 3, 4. submitted on February 11, 2014, by Barry Swackhamer of Brentwood, California.   5. submitted on May 7, 2015, by Allen C. Browne of Silver Spring, Maryland. • Syd Whittle was the editor who published this page.
Share This Page.