It is better to die on your feet than to live on your knees! – Dolores Ibarrúri

— ... no man ever entered earth more honorably than those who died in Spain – Ernest Hemingway — 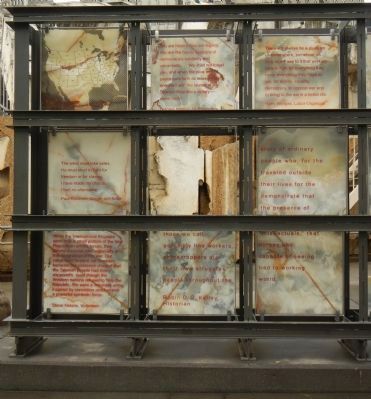 The Abraham Lincoln Brigade Memorial is part historical marker, part veterans memorial and entirely a work of art. It consists of a number of panels. The panels are in 15 columns of three rows each. Not all panels contain text, and some panels of this much vandalized marker are missing. The columns are presented left to right with each column’s rows presented top to bottom unless otherwise noted.

The artist must take sides.
He must elect to fight for
freedom or for slavery.
I have made my choice.
I had no alternative.
- Paul Robeson, Singer and Actor

While the International Brigades were only a small portion of the total Republican armed forces, the played a crucial role, especially at the early stages of the war. Our values went beyond our numbers because our presence showed that the Spanish people had many supporters, even though the Western nations refused to help the Republic. We were a volunteer army inspired by conviction and became a powerful symbolic force. – Steve Nelson, Volunteer

You are history. You are legend. 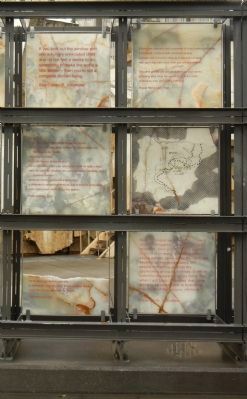 You are the heroic example of
democracy’s solidarity and
universality...We shall not forget
you, and when the olive tree of
peace puts forth its leaves again
entwined with the laurels of the
Spanish Republic’s victory –
come back!
- Dolores Ibarrúri, La Pasionaria

... story of ordinary... people who, for the... traveled outside... their lives for the...demonstrate that... the preserve of those we call “intellectuals,” that assembly line workers, nurses, and sharecroppers are capable of seeing their won struggles tied to working people throughout the world. – Robin D.G. Kelley, Historian

There will always be a place for us somewhere, somehow, as long as we see to it that working people fight for everything they have, everything they hope to get, for dignity, equality, democracy, to oppose war and to bring to the world a better life. – Harry Bridges, Labor Organizer 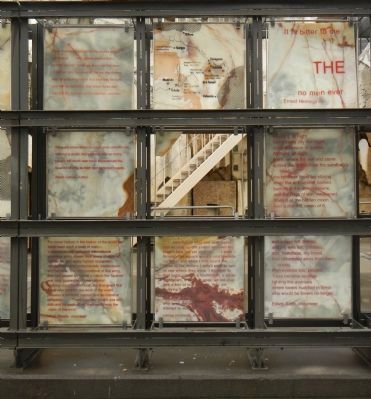 The bottom panel is an English translation of the poem above. Half the panel is missing.

... full of raging gentleness and rifles
to defend the Spanish city in which corralled liberty
might fall and die, devoured by the beasts.
- Pablo Neruda, Poet

If there are men who are composed of a soul without frontiers,
a forehead scattered with universal tresses,
covered with horizons, ships and mountain ranges,
with sand and with snow, then you are one of them.

The olive groves will set about piercing you bones,
unfolding their most ferrous of roots in the earth,
embracing men universally, faithfully.
-Miguel Hernandez, Poet

The middle panel is a map 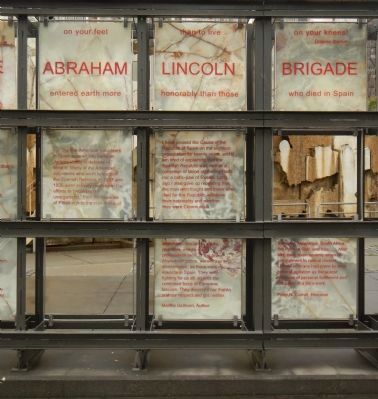 Spain changed my whole life. I saw a country struggling – ordinary people, peasants, poor people. They couldn’t even read or write, but when these young people came up to the front, we became an integrated army, the people struggling against the oppressing group of fascists. It left an indelible impression on my mind. So when I got back, I decided that I was going to be committed to furthering the cause of people, whatever I did. – Dave Smith, Volunteer

Spain has been etched in the hearts of our generation... and carried around like a terrible wound. Spain gave us our first taste of defeat, and because of her we discovered with an enduring shock that one can be right and still be defeated, that sheer force can trample the human spirit underfoot, and that there are times when courage goes unrewarded. Without a doubt, this explains why so many people the world over have experienced the Spanish drama as their own personal tragedy. – Albert Camus, Author

For never before in the history of the world had there been such a body of men – a spontaneously gathered international volunteer army, drawn from every stratum of human life and every human occupation, handworkers and professionals, intellectuals and farmers. The very existence of this army, that had played so crucial a role in 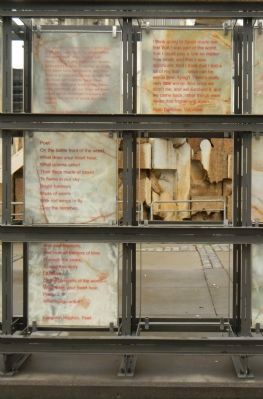 Photographed By Barry Swackhamer, February 10, 2014
5. The Abraham Lincoln Brigade Marker, columns 12 & 13
the Spanish war, was guarantee of international working-class brotherhood; the final proof that those who perform the work of the world possess a common interest and an identical obligation... These men had fought and died with and for each other, their roster was the roster of mankind. – Alvah Bessie, Volunteer

I... told myself over and over again that as long as the sirens sounded the planes had not yet arrived... I went through the square quickly and towards my hotel and when I first heard the noise of the motors I didn’t want to turn to see where they were. I thought: in that hotel room is a toothbrush, a clean nightgown, a cake of soap, and old coat and a box of lousy candy. Yet I am hurrying to it, it is where I am trying to go, it is the place where I have what belongs to me. And I knew suddenly why even the poorest women in Madrid wanted to stay with what was theirs. – Lillian Hellman, Author 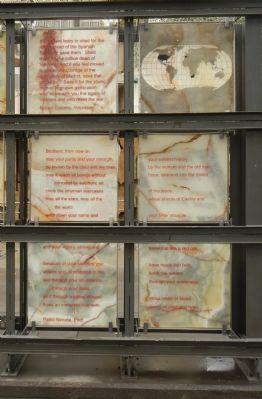 Photographed By Barry Swackhamer, February 10, 2014
6. The Abraham Lincoln Brigade Marker, columns 14 & 15
head lay staring;
while the anti-aircraft barked,
barked at the droning plane,
and the dogs of war, awakened
howled at the hidden moon.
And a star fell, omen of ill,
and a man fell, lifeless
and, friendless, my friend.
And I stumbled away from them, crying
from eyeless lids, blinded.
Trees became torches
lighting the avenues
where lovers huddled in terror
who would be lovers no longer.
- Edwin Rolfe, Volunteer

... the first American volunteers in Spain entered into battle at Jarama Valley in defense of Madrid. Many of the American volunteers who went to support the Spanish Republic in 1937 and 1938 were actively involved in the efforts to “organize the unorganized,” from the factories of Pittsburgh to the coal mines of

I have praised the Causa of the Republic of Spain on the slightest provocation for twenty years, and I am tired of explaining that the Spanish Republic was neither a collection of blood-slathering Reds nor a cat’s-paw of Russia. Long ago I also gave up repeating that men who fought and those who died for the Republic, whatever their nationality and whether they were Communists, anarchists, Socialists, poets, 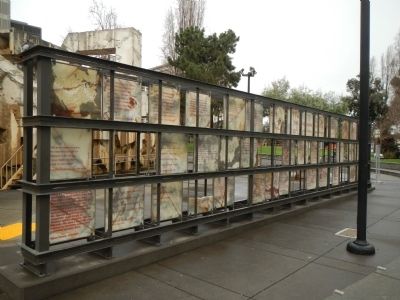 Photographed By Barry Swackhamer, February 10, 2014
7. The Abraham Lincoln Brigade Marker
plumbers, middle-class professional men, or the on Abyssinian prince, were brave and disinterested, as there were no rewards in Spain. They were fighting for us all, against the combined force of European fascism. The deserved our thanks and our respect and got neither. – Martha Gellhorn, Author

... Salvador, Nicaragua, South Africa, the Persian Gulf, and Iraq... After fifty, sixty, even seventy years of commitment to radical dissent, Lincoln veterans had come to view political agitation as the surest measure of personal fulfillment and the value of a life’s work. – Peter N. Carroll, Historian

... you may wonder why I write as if we had been here for years when we came here three weeks ago today. Well, a day seems ten weeks, sometimes a year. It seems as if we had been here for months as New York is a faint and unreal dream. All our lives we seem to have been running back and forth along these cold corridors, all our lives we have hated white moonlight because it means the birds of death are busy nearby... – Frederick Martin, Volunteer

Poet
On the battle front of the world,
What does your heart hear,
What poems unfurl
Their flags made of blood
To flame in our sky –
Bright 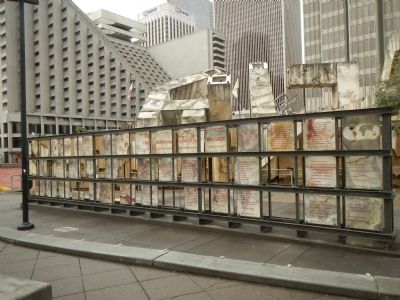 Photographed By Barry Swackhamer, February 10, 2014
8. The Abraham Lincoln Brigade Marker
banners
Made of words
With red wings to fly
Over the trenches
And over frontiers,
And over all barriers of time
Through the years
To sing this story
Of Spain
On the ramparts of the world –
What does your heart hear,
Poet,
What songs unfurl?
- Langston Hughes, Poet

I think going to Spain made me feel that I was part of the world, that I could play a role no matter how small, and that it was significant. And I think that I lost a lot of my fear...what can be worse than dying? There’s really very little worse. And once we didn’t die, and we survived it, and we came back, other things were never that frightening again. - Ruth Davidow, Volunteer

The poem below fills the center and bottom panels of columns 14 and 15.

Brothers, from now on
may your purity and your strength, 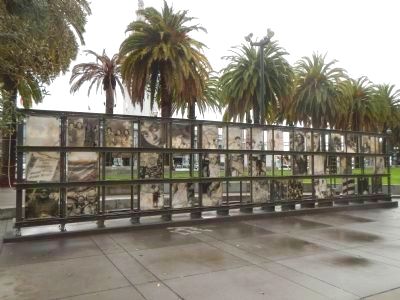 Photographed By Barry Swackhamer, February 10, 2014
9. The Abraham Lincoln Brigade Marker, back side
Note the photographs. Click on image to enlarge it.
your solemn history
be known by the child and the man, by the woman and the old man,
may it reach all beings without hope, descend into the mines corroded by sulphuric (sic) air,
climb the inhuman staircases of the slave,
may all the stars, may all the wheat shoots of Castile and the world
write down you name and your bitter struggle
and you victory, strong and terrestrial like a red oak.

Because of you sacrifice you have made lost faith,
absent soul, confidence in the earth, be reborn,
and through your abundance, through your nobleness, through you dead,
as if through a valley of hard rocks made of blood,
flows an immense river with doves of steel and hope.
- Pablo Neruda, Poet

Topics and series. This memorial is listed in these topic lists: Arts, Letters, Music • War, Spanish-American • War, World II. In addition, it is included in the Former U.S. Presidents: #16 Abraham Lincoln series list. A significant historical year for this entry is 1937.

Location. 37° 47.731′ N, 122° 23.704′ W. Marker is in San Francisco, California, in San Francisco City and County. Memorial can be reached from Market Street near Embarcadero, on the left when traveling east. Touch for map 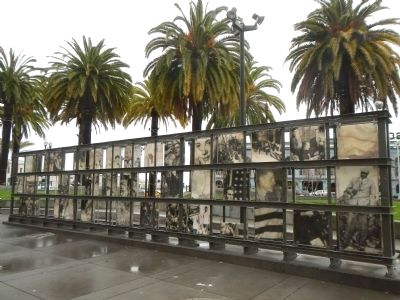 Photographed By Barry Swackhamer, February 10, 2014
10. The Abraham Lincoln Brigade Marker, back side
Note the photographs. Click on the image to enlarge it.
. Marker is at or near this postal address: 1 Market Street, San Francisco CA 94105, United States of America. Touch for directions.

More about this marker. This marker is located at Justin Herman Plaza near the (inoperable) Vailliancourt Fountain.

Also see . . .
1. Monument to Lincoln Brigade unveiled - SF Gate. David Smith was a young college student with no military training when he shipped off to Spain to fight in the brutal Spanish Civil War. On Sunday, a throng of Bay Area history buffs gave him a standing ovation and shouted "Viva Dave!" as the now-92-year-old Berkeley resident teared up and pumped his fist in the air at the unveiling of San Francisco's newest public monument: a memorial to soldiers who fought in the lost war more than six decades ago. (Submitted on March 1, 2014, by Barry Swackhamer of Brentwood, California.) 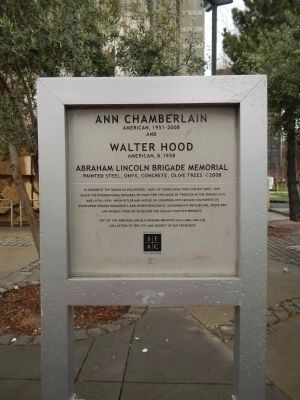 In honor of the American volunteers, many of whom came from the Bay Area, who joined the International Brigades to fight for the cause of freedom in the Spanish Civil War (1936-1939). When Hitler and Mussolini conspired with Spanish militarists to overthrow Spanish democracy, and other democratic governments refused aid, these men and women stood up to defend the legally elected Republic.