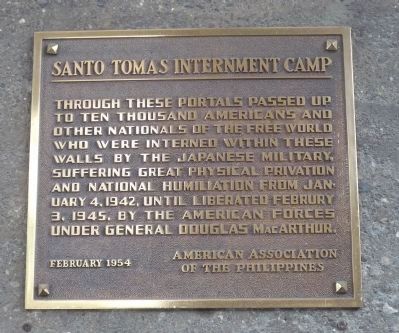 By Richard E. Miller, January 18, 2013
1. Santo Tomas Internment Camp Marker
Inscription.
Santo Tomas Internment Camp. Main Building, University of Santo Tomas. , Through these portals passed up to ten thousand Americans and other nationals of the free world who were interned within these walls by the Japanese military. Suffering great physical privation and national humiliation from January 4, 1942, until liberated February 3, 1945, by the American Forces under General Douglas MacArthur. . This historical marker was erected in 1954 by American Association of the Philippines. It is in Sampaloc Metro Manila Philippines

Through these portals passed up to ten thousand Americans and other nationals of the free world who were interned within these walls by the Japanese military. Suffering great physical privation and national humiliation from January 4, 1942, until liberated February 3, 1945, by the American Forces under General Douglas MacArthur.

Erected 1954 by American Association of the Philippines.

Topics. This memorial is listed in these topic lists: African Americans • War, World II. A significant historical month for this entry is January 1939.

Location. 14° 36.587′ N, 120° 59.372′ E. Marker is in Sampaloc, Metro Manila. Memorial is on Plaza Major just north of España Street, on the right when traveling west. at the front entrance to the UST's "Main Building" on the north side of the Plaza Mayor which is at the center of the campus - bounded on the northwest by Osmeña Drive and on the southeast by Quezon Drive. Touch for map. Marker is at or near this postal address: ESpaa, Sampaloc, Manila, Philippines, Sampaloc, Metro Manila 1008, Philippines. Touch for directions.

Other nearby markers. At least 8 other markers are within 3 kilometers of this marker, measured as the crow flies. University of Santo Tomas 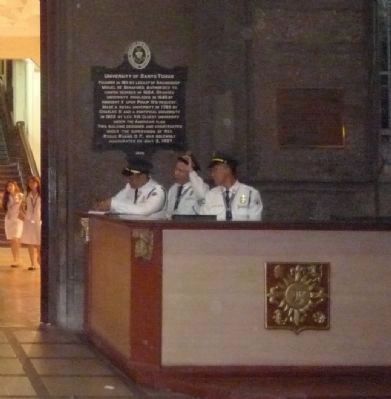 By Richard E. Miller, January 29, 2013
2. Santo Tomas Internment Camp Marker, at entrance to the UST Main Building off Plaza Major
- visible on the wall (in the shadow, upper right, behind the security desk) in the exterior foyer

Also see . . .
1. Santo Tomas Internment Camp. ... The number of internees in February 1942 amounted to 3,200 Americans, 900 British (including Canadians, Australians, etc.), 40 Poles, 30 Dutch, and individuals from Spain, Mexico, Nicaragua, Cuba, Russia, Belgium, Sweden, Denmark, China, and Burma. About 100 of the total were Filipino or part-Filipino, principally the spouses and children of Americans. Of the Americans, 2,000 were males and 1,200 females, including 450 married couples. Children 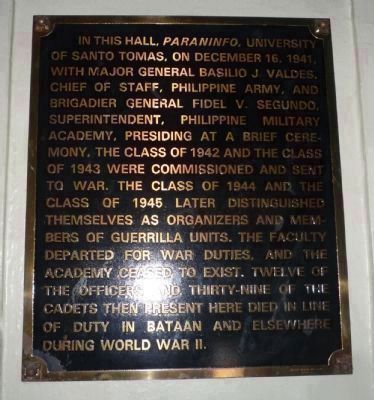 By Richard E. Miller, January 18, 2013
3. Plaque commemorating UST student cadets who fought with Philippine Army and guerrilla units in WWII
- displayed at the UST Museum in the Main Building
numbered 400. Seventy African-Americans were among the internees as were two American Indians, a Mohawk and a Cherokee. The British were divided about equally between male and female. The imbalance in gender among the Americans was primarily due to the fact that, anticipating the war, many wives and children of American men employed in the Philippines had returned to the US before December 8, 1941. A few of the women and children had been sent to the Philippines from China to escape the war in that country. Some had arrived only days before the Japanese attack. ... (Submitted on March 20, 2013, by Richard E. Miller of Oxon Hill, Maryland.)

2. Lt.Col. Walter H. Loving, Philippine Army. Afro-American soldier, Philippine-American War veteran, acclaimed musician, composer, and martyr. He organized and directed the world-renowned Philippine Constabulary Band prior to WWI. Retiring in Commonwealth, he was interned with his wife, Edith at the Santo Tomas camp in 1942. Eventually allowed to return to the couple's home in Ermita due to his declining health, he and Edith became separated during the Battle of Manila in 1945. He was seized and killed by Japanese soldiers, and his remains were never recovered. (Submitted on March 21, 2013, by Richard E. Miller of Oxon Hill, Maryland.) 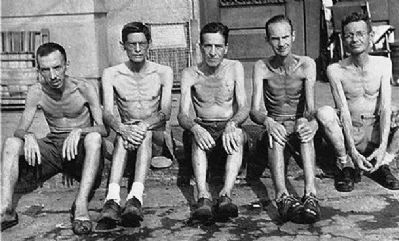 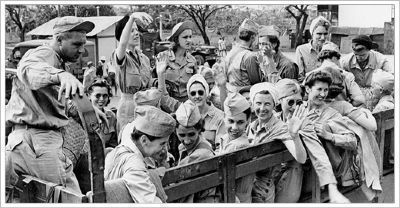 By U.S. Army Signal Corps, circa Feb 1945
5. U.S. Army Nurses, rescued after three years confinement at Santo Tomas and heading for home.
"The Angels of Bataan and Corregidor" 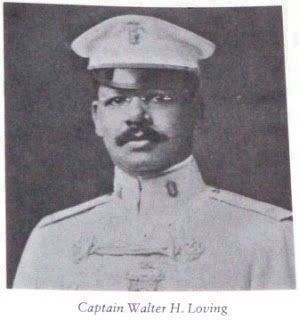