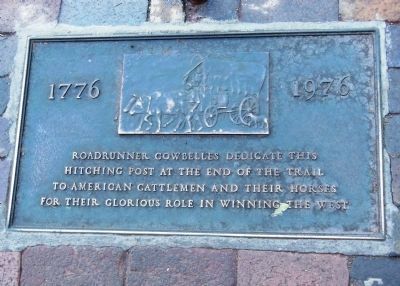 Roadrunner Cowbelles dedicate this hitching post at the end of the trail to American cattlemen and their horses for their glorious role in winning the West.

Location. 35° 41.269′ N, 105° 56.256′ W. Marker is in Santa Fe, New Mexico, in Santa Fe County. Marker is at the intersection of Washington Avenue and East Palace Avenue, on the right when traveling south on Washington Avenue. This marker is embedded into the sidewalk along the west side of Washington Avenue, adjacent to the east side of the Palace of the Governors Building, in front of the entrance to the Palace of the Governors Print Shop. It is best viewed when walking and could easily be missed when driving on the street. Touch for map. Marker is in this post office area: Santa Fe NM 87501, United States of America. Touch for directions. 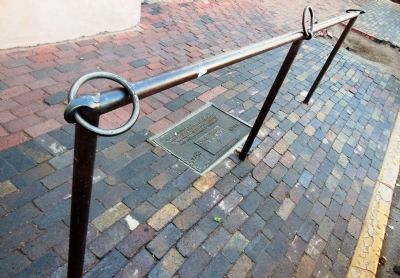 Photographed By Cosmos Mariner, June 10, 2013
2. Hitching Post
The hitching post is embedded into the sidewalk, directly above the marker, and is more easily visible from the street.

More about this marker. The Roadrunner Cowbelles are the Santa Fe Women's Auxiliary of the Cattlemen's Association.

Also see . . .
1. A History of the Santa Fe Trail.
In 1879, the Atchison, Topeka, and Santa Fe (A.T.& SF) Railroad crept over Raton Pass and in 1880 the A.T.& SF reached Lamy station south of Santa Fe, ending long distance freighting over the plains - the Santa Fe Trail was at an end. For almost 60 years the Santa Fe Trail was the conduit which brought goods to New Mexico and the southwest and had sent back silver, furs, and mules. But ideas were also exchanged across this route along with culture. New Mexicans were exposed to “Yankees” and their way of doing business long before the invasion took place. Raw Missouri farm boys were fascinated with the exotic city of Santa Fe once they got over the shock of its appearance as a large brick kiln. (Submitted on April 29, 2018, by Cosmos Mariner of Cape Canaveral, Florida.)