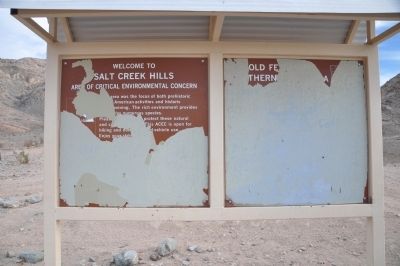 This area was the focus of both prehistoric...American activities and historic...mining. The rich environment provides...for numerous species.

Please...protect these natural and c... This ACEC is open for hiking and non...d vehicle use.

Geology of the Area
The Amargosa/Salt Spring mine lies in the Salt Spring Hills and in the vicinity of the contact zone of the Mesozoic granite rock and Cambrian age sedimentary rocks considting of limestone and limy shales. This contact has recrystalized and altered the sedimentary rocks into metamorphic rocks (hornfils and skarns).

Within the southern part of the Salt Spring Hills, where Highway 127 makes a bend, is a water gap cut by the ancestral Mojave River, which flowed into Death Valey from 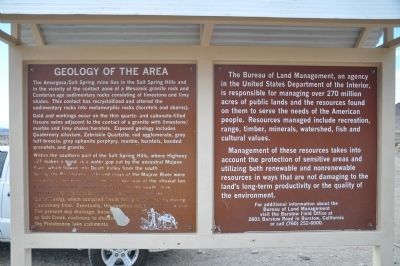 Click or scan to see
this page online
the south. During the Pleistocene, silts and clays of the Mojave River were temporarily ponded against the hills because of the alluvial fan extending from the Avawatz Mountains to the sour. It is believed that this lake is related in a much larger lake (Lake Manly), which occupied Death Valley intermittently during Quaternary time. Eventually, the overflow cut through the barrier. The present day drainage known as Salt Creek, continues to dissect the Pleistocene lake sediments.

Chilean-Style Arrastre
Arrastres were used to crush ore to extract precious metals. The mill stone in front of you is all that remains of the three arrastres known to have existed here in the late 1800s.

Amargosa House
This may be the oldest standing structure in the Mojave Desert. The three room office/house was originally constructed between 1850-1852. The picture above shows the building 100 years later, in 1950, with a modern roof.

Bats of Salt Creek Hills
Bats belong to a group of mammals called Chiroptera, meaning "hand-wing." The bones in a bat's wing are the same as those in a human arm and hand, except bat finger bones are extremely long and connected by a membrane of skin to form a wing. Though it may seem odd, bats are more closely related to humans than birds.

Most bats in the Western U.S. feed on insects, and are 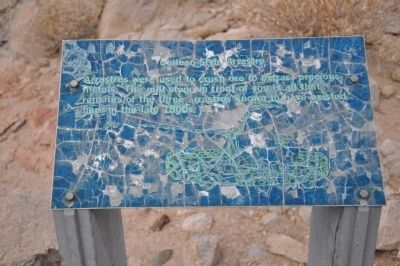 Photographed By Michael Kindig, October 2, 2010
3. Chilean-Style Arrastre
the only major predator of night-flying insects. A single bat can eat half its body weight in insects in one night...that's roughly 3000 or more a night per bat! Bats are such effective insectivores that some farmers encourage bats to visit their fields by building wooden bat "houses" nearby, resulting in a reduction or complete elimination of presticide use.

The stream, wetland, dune and wash areas surrounding Saltcreek provide food and shelter for as many as nine different typs of bats. Some of these bats forage just above the ground, over water, or along the banks of streams. Others forage about 13-15 feet above ground and grab insects out of the air or off vegetation. Still other bats eat insects as high as 1000 feet above ground. Some bats hunt for insects right after sundown, while others venture out in the middle of the night to hunt. As these bats eat at different times and different places, they can coexist in this relatively small area by not competing for the same resource the at the same place and time. Not all bats eat the same kind of bug either. For example, the Pallid bat specialized in eating hard-shelled insects, like scorpions!

Tragedy in the Old West
There are several reports of two massacres at the Amargosa/Salt Sping Mine:

In October 1864 three miners named Cook, Plate and Gordon were reportedly attacked by a roving 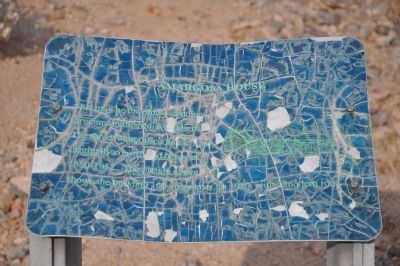 Photographed By Michael Kindig, October 2, 2010
4. Amargosa House
band of Chemehuevis. Cook was killed and the mill was burned. The other two miners escaped into the desert and committed suicide some 20 miles away. The attack was reported in the Los Angeles Times on 29 October. The Rousseau Party came through in December 1864 and noted four houses and the burned mill.

A new company, George Rose as superintendent, took over the mine in late 1864. There are somewhat confused reports of another attack that happened in either 1864 or 1865. Eight miners were working the claims and noted a Paiute band camped at nearby Sheep Creek Springs. One of the miners made his way to Marl Springs 45 miles to the south near the present Kelso to summon help from the military. The military sent a relif party which arrived too late. The seven miners, not realizing that help was on the way, tried to make a pre-dawn escape, scattering as they fled. They were easily spotted by lookouts and all seven were slain.

Bats and Underground Mines
Many natural caves and large rock crevices, once occupied by bats in the desert Southwest, have been destroued or are subject to extensive human activity. As a result, many underground abdandoned mineshafts have become important replacement roosting habitat for these gentle winged mammals.

The historic mines of Salt Creek Hills offer a wide variety of roosting sites for many kindfs of bats. 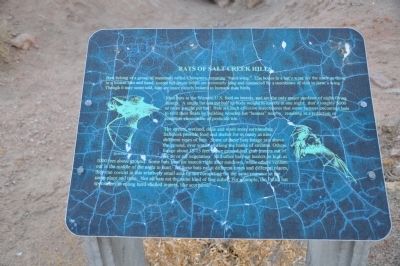 Photographed By Michael Kindig, October 2, 2010
5. Bats of Salt Creek Hills
Some bats roost in large groups, others roost by themselves. Regardless if they roost alone or together, all bats are sensitive to human disturbance. Townsend's big-eared bat have been known to abandon a cave or mine permanently from just a single inappropriate visit by a human! Hibernating bats, and mother bats nursing their young are particularly sensitive to human disturbance. In face, disturbance to bats under these circumstances can result in sickness and death for these mammals, where normally they would live twenty years or more.

Many miners today are purpsely improving their underground workings to provide bat habitat and are gating mine entrances, like most of the mines here at Salt Creek Hills. Many people today are realizing the importance and value of bats in our ecosystem and have learned:
1) Bats carry rabies only rarely, and much less than many other native mammals;
2) Bats will not purposely fly into your hair. bats prefer to stay away from people;
3) Bats are not blind. They have very good eyesight which is supplemented by the use of echolocation;
4) Only vampire bats consume blood and they are found in Mexico, South America, and Central America.
5) Bats consume at least half their body weight in insects every night. That's roughly 3000 insects a night, per bat, and
6) Bats are a remendous barometer of indicator of ecosystem 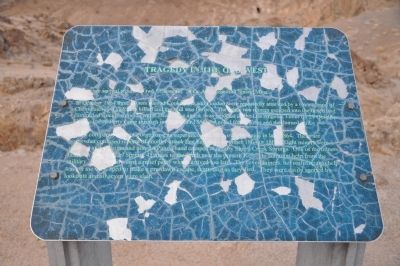 Photographed By Michael Kindig, October 2, 2010
6. Tragedy in the Old West
health. Bats are a top of the food chain predator and pollutants finding their way into our world will often affect bats before they affect larger mammls, like humans.

Stamp Mill
Stamp mills were used to crush ore to extract precous metals, such as gold and silver. The stamp mill in front of you was originally built in the 1880s. This drawing shows how the building once looked with a portion of the wall "cut away" to show the stamps.

Topics. This historical marker is listed in this topic list: Natural Resources. A significant historical month for this entry is October 1864. 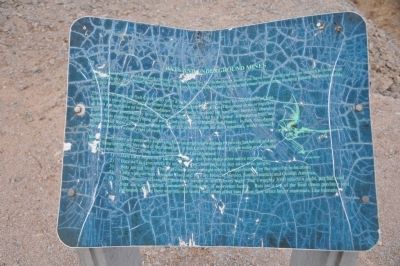 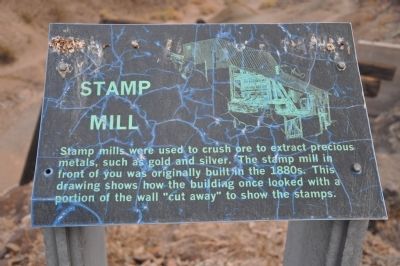 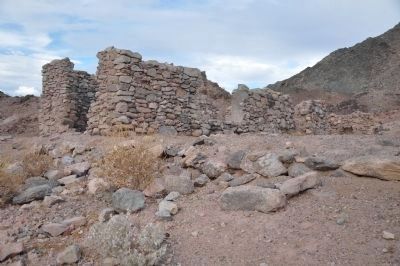 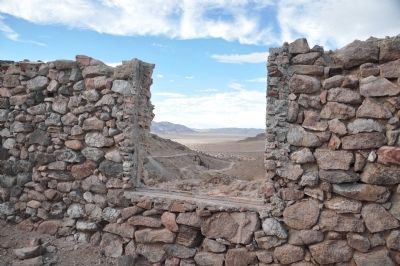 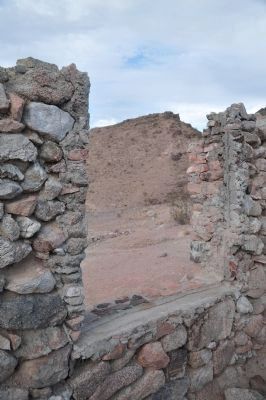 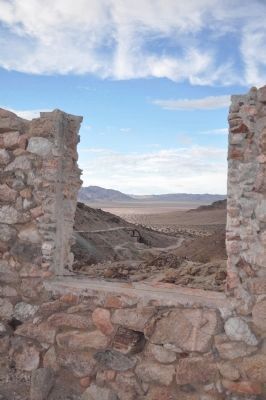 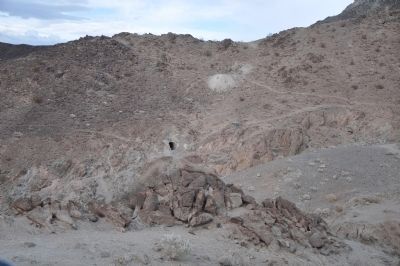 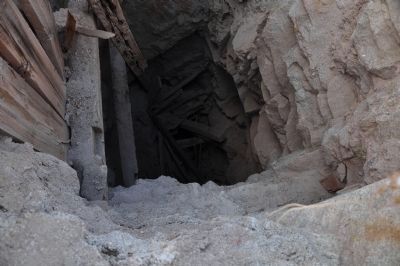 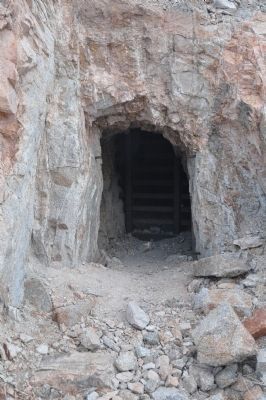 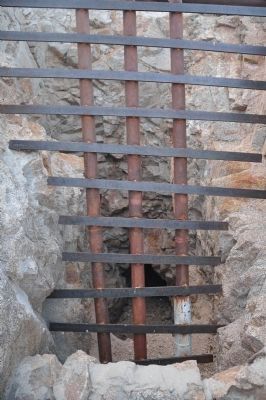 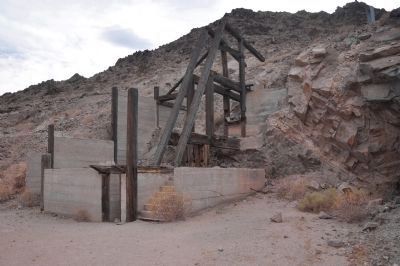 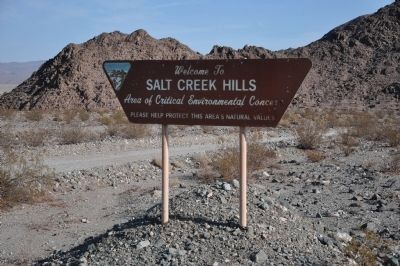