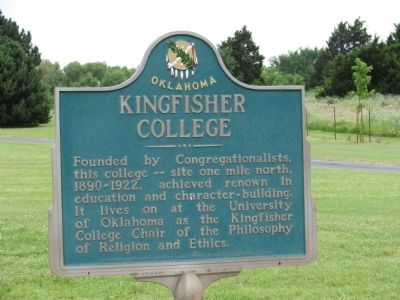 Founded by Congregationalists, this college – site one mile north, 1890- 1922, achieved renown in education and character-building.

It lives on at the University of Oklahoma as the Kingfisher College Chair of the Philosophy of Religion and Ethics.

Topics and series. This historical marker is listed in these topic lists: Churches & Religion • Education. In addition, it is included in the Oklahoma Historical Society series list. A significant historical year for this entry is 1922.

Location. 35° 51.41′ N, 97° 54.414′ W. Marker is in Kingfisher, Oklahoma, in Kingfisher County. Marker is at the intersection of State Highway 33 and Bowman Avenue, on the left when traveling west on State Highway 33. The marker is located in a small pull-out on the south side of Oklahoma state highway 33, just east of the intersection with Bowman Avenue and about one mile east of the Kingfisher city limit. Touch for map. Marker is in this post office area: Kingfisher OK 73750, United States of America. Touch for directions.

Other nearby markers. At least 7 other markers are within 6 miles of this marker, measured 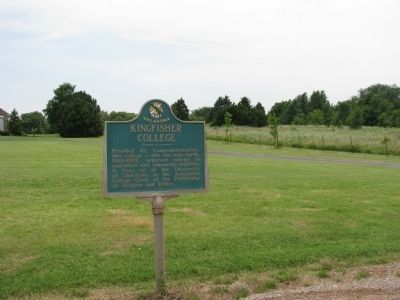 Also see . . .  Exploring Oklahoma History - Kingfisher College.
Kingfisher College was a college in Kingfisher, Oklahoma from 1895-1922. First opened in an old hotel in Kingfisher on September 2, 1895, the college was the 42nd with ties to the Congregational church in America. Enrollment was increasing until World War I, when it sharply fell. The college was forced to close in 1922, due to declining donations and cheaper tuition at schools such as Central State Normal School. (Submitted on April 13, 2014, by Cosmos Mariner of Cape Canaveral, Florida.) 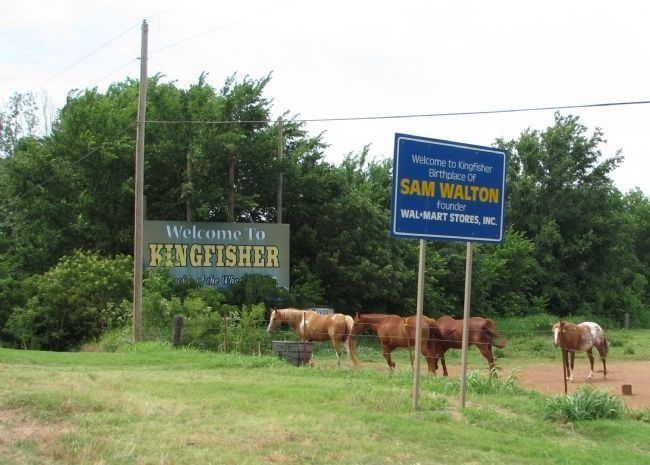