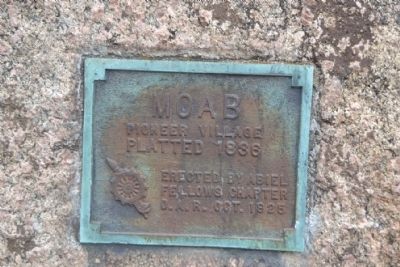 Erected 1925 by Abiel Fellow Chapter, Daughters of the American Revolution.

Topics and series. This historical marker is listed in this topic list: Settlements & Settlers. In addition, it is included in the Daughters of the American Revolution (DAR) series list. A significant historical year for this entry is 1836. 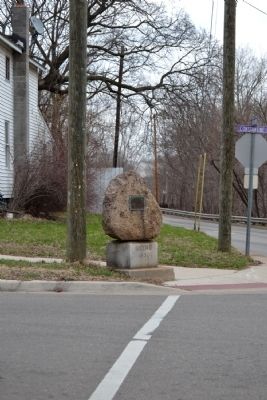 More about this marker. On the concrete pedestal is etched "Moab 1830".

Regarding Moab. From the article "Paper Villages of St. Joseph County" by Sue I. Silliman, State Historian D.A.R.:

“Moab’s first settlement was made in 1827. It was platted July 28, 1830, by Christopher Shinnaman, with Neal McGaffy Justice of the Peace and J.W. Anderson Register of Deeds. The description was a surprise:–S. ½ of N.W. ¼ of Sec. 19, T. 6 S. R. 11 W., just north of the old Jacob Neidhart property, and includes at least a portion of the present King addition. The lots were to be 66 ft. wide, 157 deep. Water street was to run in a “northeasterly” direction along the river; Kalamazoo St. Was to run north and south, quite probably the present Constantine Street. Spring St. was to parallel Kalamazoo. Main St. was to run east and west and was to be 66 ft. wide. Of the proprietor we have found no other record than in the transfer of land titles. Concerning this paper village, so near home, we find it included 138 and a fraction acres, was deeded to Christopher Shinnaman May 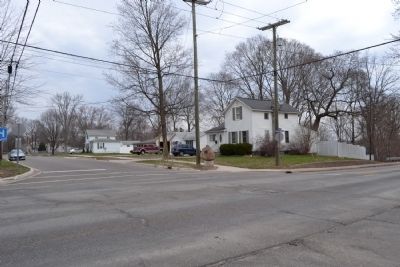 Photographed By Duane Hall, April 12, 2014
3. Moab Marker
At the northeast corner of Constantine Street and W. Broadway Street
21, 1830, by Abraham and Molly Brechart, the said Molly making avadavit that her husband did not compel her to sign. The deed was registered by Jno. Anderson, R. of D. The same day this worthy couple deeded 83 acres adjoining Moab to Jacob Shinnaman for $132.50. Moab’s 138 acres were sold to Christopher Shinnaman for $217.50.”


In 1871 the city of Three Rivers extended its corporate limits to include Moab as part of the 3rd Ward.