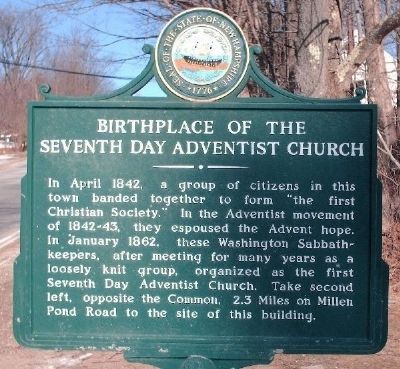 In April 1842, a group of citizens in this town banded together to form "the first Christian Society." In the Adventist movement of 1842-43, they espoused the Advent hope. In January 1842, these Washington Sabbathkeepers, after meeting for many years as a loosely knit group, organized the first Seventh Day Adventist Church. Take second left, opposite the Common, 2.3 miles on the Millen Pond Road to the site of this building. 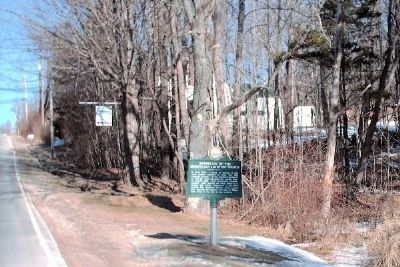 More about this marker. The actual church building is several miles away, but the access road is maintained only in the summer.

Regarding Birthplace of the Seventh Day Adventist Church. The origin of the Seventh-day Adventists can be traced to the Millerite Movement of the 19th Century. This movement was largely responsible for what has been called the Great second advent awakening. William Miller (1782-1849) was a farmer who settled in upstate New York after the war of 1812.

Ellen Harmon (later known by her married name Ellen White) joined with other Adventists, including Joseph Bates, and her husband James White to form a small group of Baptist, Methodist, Congregational and Presbyterian believers in Washington NH. The church was formally organized as the Seventh-day Adventist Church.