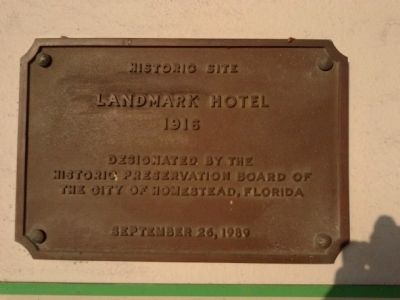 Photographed By Marsha A. Matson, April 27, 2014
1. Landmark Hotel Marker
Inscription.
Landmark Hotel. .
Historic Site Landmark Hotel 1916. . This historical marker was erected in 1989 by Historic Preservation Board of the City of Homestead, Florida. It is in Homestead in Miami-Dade County Florida

Erected 1989 by Historic Preservation Board of the City of Homestead, Florida.

Topics. This historical marker is listed in this topic list: Notable Buildings. A significant historical year for this entry is 1916.

Other nearby markers. At least 8 other markers are within walking distance of this marker. The Hotel Redland (about 300 feet away, measured in a direct line); Redland District (about 300 feet away); The Seminole Theater (about 500 feet away); Historic Town Hall (about 600 feet away); First Baptist Church (approx. ¼ mile away); First United Methodist Church (approx. half a mile away); Dr. James Archer Smith House (approx. 0.7 miles away); Lindeman-Johnson House (approx. 0.7 miles away). Touch for a list and map of all markers in Homestead. 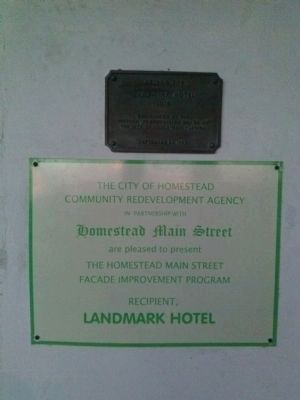 Click or scan to see
this page online
The historic Landmark Hotel in Homestead is on the National Register of Historic Places and began its life as a movie theater in Miami. For many years it was called the Seminole Cafe and Hotel.

Additional commentary.
1.
The Landmark Hotel (also known as the Seminole Hotel) was built in Miami in 1913 and was known as the Airdome Theater, an open air theater with no walls or roof, just a front entrance flanked with small offices and a wooden stage with a screen. In 1914, it was converted into an enclosed two story structure and renamed the Colonial Theater. In 1916 the theater was disassembled and moved via railroad to its present site in Homestead. Purchased in 1919 by James W. English it was renamed the Seminole Theater, converting the second story into bedrooms to relieve overcrowding from local boarding houses. In 1936 major renovation converted the remaining theater into bedrooms now totaling twenty-six as well as a restaurant. The building played a prominent past in Homestead's civic community. Eventually Mr. English built a second Seminole Theater on Krome Avenue owning a string of theaters throughout South Florida. In 1965 new owners changed the name to the Landmark Hotel. Note To Editor only visible by Contributor and editor 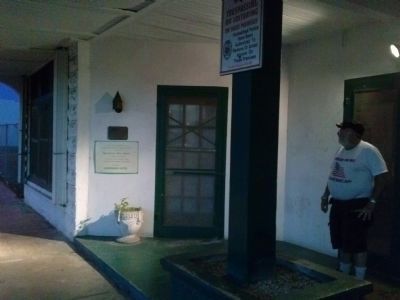 Photographed By Marsha A. Matson, April 11, 2015
3. Landmark Hotel Entrance
— Submitted May 2, 2014, by Marsha A. Matson of Palmetto Bay, Florida.
2. Landmark Hotel
When I revisited the hotel on April 11, 2015, I found that the hotel was apparently operating, so I opened the front screen door and peeked inside. The lobby was dilapidated and furnished with rundown furniture. A barefoot and shirtless man was walking down the hallway into the lobby. The hotel looked like a flophouse, not a place where tourists would stay.
— Submitted April 13, 2015, by Marsha A. Matson of Palmetto Bay, Florida. 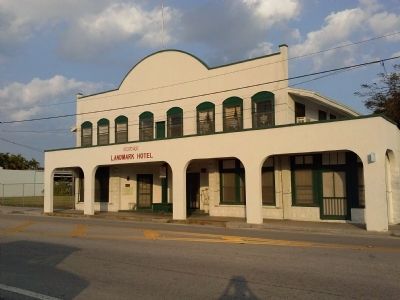 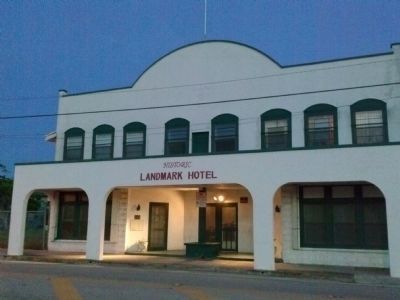