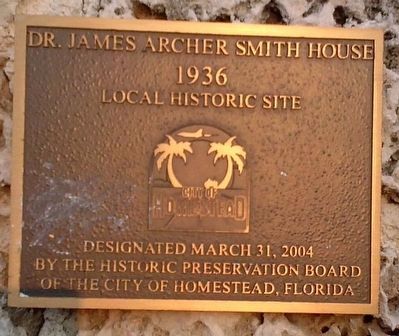 Erected 2004 by Historic Preservation Board of the City of Homestead, Florida.

Topics. This historical marker is listed in this topic list: Notable Buildings. A significant historical year for this entry is 1936.

Regarding Dr. James Archer Smith House. This is a two-story Masonry Vernacular building, 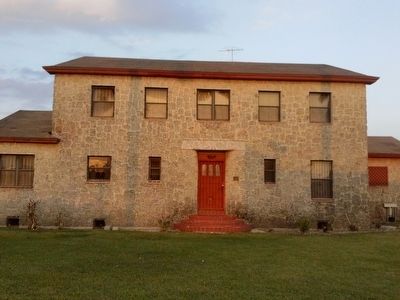 Click or scan to see
this page online
constructed of oolitic limestone, a native coral rock. Dr. Smith owned a lime grove in the Redland from which the stone was sourced. The building has been assessed as among the most important example of masonry vernacular limestone architecture in Homestead and few exist today. Dr. James Archer Smith served the community for many decades, arriving in Homestead in 1919 following service in World War I. Dr. Smith continued to see patients into his eighties, never retiring but continuing to work until his death in 1982. The Smiths resided at the house until Mrs. Smith passed away in the 1960s. The adjacent building was constructed as a motel circa 1950s.
Credits. This page was last revised on November 25, 2017. It was originally submitted on April 29, 2014, by Marsha A. Matson of Palmetto Bay, Florida. This page has been viewed 753 times since then and 68 times this year. Photos:   1, 2. submitted on April 29, 2014, by Marsha A. Matson of Palmetto Bay, Florida. • Kevin W. was the editor who published this page.
Share this page.