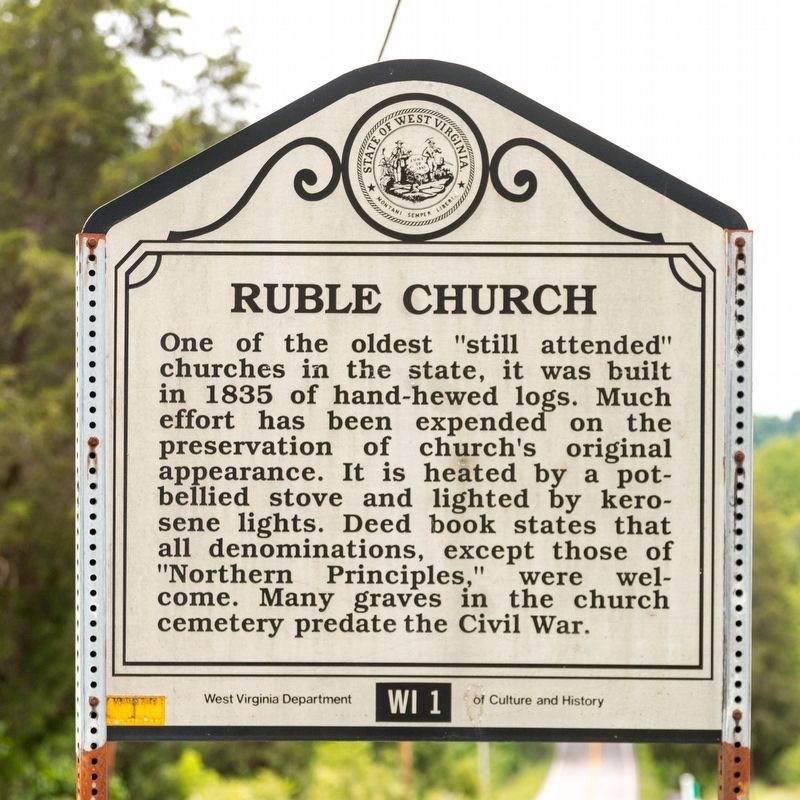 Photographed By J. J. Prats, May 30, 2021
1. Ruble Church Marker
Inscription.
Ruble Church. . , One of the oldest “still attended” churches in the state, it was built in 1835 of hand-hewed logs. Much effort has been expended on the preservation of church's original appearance. It is heated by a pot-bellied stove and lighted by kerosene lights. Deed book states that all denominations, except those of "Northern Principles," were welcome. Many graves in the church cemetery predate the Civil War. . This historical marker was erected by West Virginia Department of Culture and History. It is Near Burning Springs in Wirt County West Virginia

One of the oldest “still attended” churches in the state, it was built in 1835 of hand-hewed logs. Much effort has been expended on the preservation of church's original appearance. It is heated by a pot-bellied stove and lighted by kerosene lights. Deed book states that all denominations, except those of "Northern Principles," were welcome. Many graves in the church cemetery predate the Civil War.

Topics and series. This historical marker is listed in this topic list: Churches & Religion. In addition, it is included in the West Virginia Archives and History series list. A significant historical year for this entry is 1835. 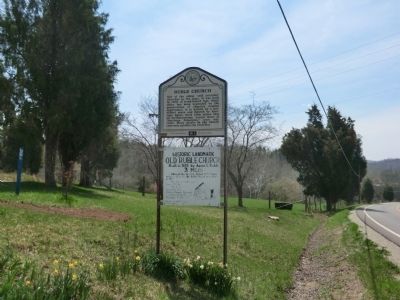 Historic Landmark
Old Ruble Church
constructed 1835 by Aaron S. Ruble.
3 miles.
Although the deed is dated 1854 there is foundation for the belief that it was built in 1835.
The first minister was Aaron S. Ruble.
Trustees: Disaway Dye • James & Vannas Robinson • Corneilus B. Dent • Richard Petty.
National Register of Historic Places.

Regarding Ruble Church. The Ruble Church is a rectangular, single-story, gable-roofed log structure
measuring fifteen feet by twenty-five feet. The building stands in a clearing on
a remote, forested hilltop (elevation 1045 ft.).

The Ruble Church is significant because it exhibits the well-preserved craftsmanship of pre-Civil War hewn log construction in an original rural West Virginia setting. The building is also significant because it was built as a philanthropic gesture by a locally prominent individual to serve the local religious and educational needs of a wilderness area in mid-19th century West Virginia.

The single-crib plan Ruble Church retains much of its original rustic integrity partly because it was never used as a domicile and therefore resisted the natural evolution of additions and alterations, and because its 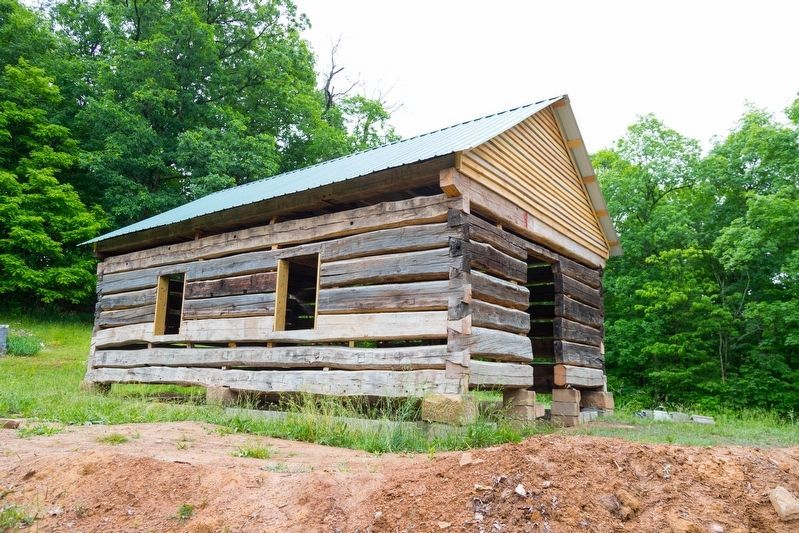 Photographed By J. J. Prats, May 30, 2021
3. Ruble Church
The church and grounds are being renovated.
remote location made the importation of newer and more convenient building materials more difficult. The exception in this instance is the standing-seam sheet metal roof which became a nearly universal roofing medium for log building in the United States when highway construction in the 20th century permitted easy accessibility of the convenient material to builders. Solid, plumb walls and deep, half-dovetailed notching attest to the skill of the builder who understood the nature and strengths of wood well enough to create a lasting structure. One of the best preserved log buildings in Western West Virginia, and one of the area's oldest buildings still in public use, the church is viewed as a significant historical landmark by the populace of Wirt County.

A Burning Springs native and a later resident of Williamstown, West Virginia, Dr. J. K. Roberts, wrote a brief history of Burning Springs in which the following story was related: “Sometime prior to the Civil War, when Burning Springs was still a wilderness, Aaron S. Ruble, a very pious and good man, feeling the need of a place of worship had, through his influence, a log church built. It was named the Ruble Church after its founder and is still known by that name.”

The log church was constructed by area settlers who were assisted, it was reported, by Aaron Ruble’s two daughters. The land for the church was given by landowner William Petty in an official transaction before Aaron Ruble 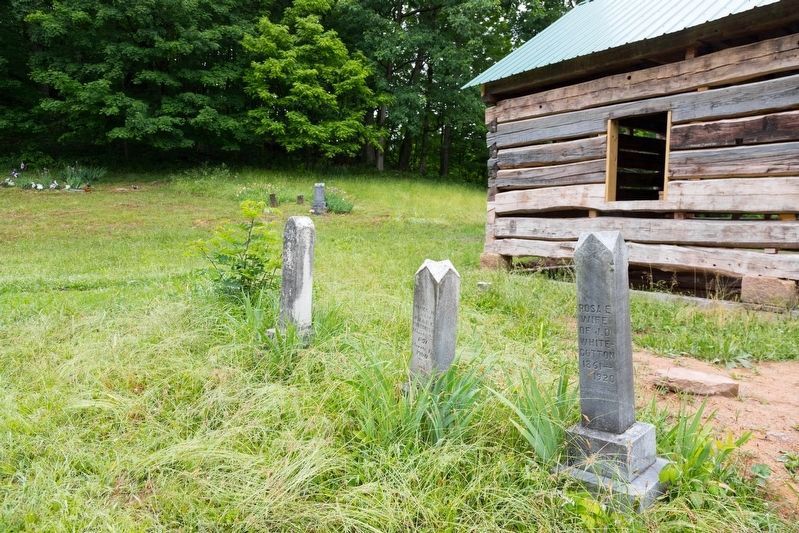 Photographed By J. J. Prats, May 30, 2021
4. Ruble Church and Cemetery
Church is at the intersection of Chestnut Run Road (Rd. 34/1), Saltkeld Road (Rd. 34/2) and Rubble Church Road (Rd. 34/1)
who was then a Wirt County justice of the peace. The deed, recorded November 20, 1854, specified that the site was to be used for a church, and that the church was to be available as a place of worship to all denominations. Regarding this matter, Robert’s history reported “The old deed for the site of the Ruble Church plainly stipulated that the land was to be used for a church to house the worship of God by all congregations, except the northern Methodists.” ** The discord over Northern-Southern sympathies in Protestant denominations prior to the Civil War is here vividly and rather amusingly evident.

During the early years the Ruble Log Church also served as a school. Among the teachers were David Roberts, Zachariah Hickman and John R. Pell. The importance of the building, which was only several ridges away from one of the nation’s earliest oil and gas producing fields of the 19th century, was emphasized by its siting on a mountain top at the forks of several unimproved roads serving scattered settlers.

** The deed actually records that the church was free to all but those of “Northern Principles.”