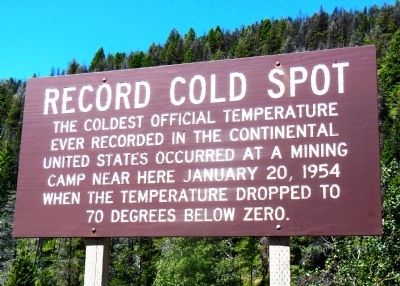 Photographed By Cosmos Mariner, July 9, 2013
1. Record Cold Spot Marker
Inscription.
Record Cold Spot. . The coldest official temperature ever recorded in the continental United States occurred at a mining camp near here January 20, 1954 when the temperature dropped to 70 degrees below zero. . This historical marker is Near Augusta in Lewis and Clark County Montana

The coldest official temperature ever recorded in the continental United States occurred at a mining camp near here January 20, 1954 when the temperature dropped to 70 degrees below zero.

Topics. This historical marker is listed in this topic list: Notable Places. A significant historical date for this entry is January 20, 1954.

Location. 47° 4.234′ N, 112° 22.389′ W. Marker is near Augusta, Montana, in Lewis and Clark County. Marker is on State Highway 200, 6 miles east of Flesher Pass Road, on the left when traveling east. The marker is located alongside Montana route 200, about one-third mile east of the Rogers Pass summit. Touch for map. Marker is in this post office area: Augusta MT 59410, United States of America. Touch for directions.

More about this marker. The marker is a somewhat weathered wooden sign. 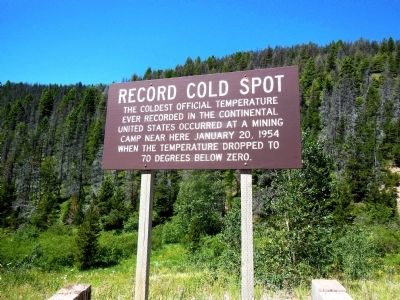 Click or scan to see
this page online
Mountains, northwest of Helena. (Submitted on May 8, 2014, by Cosmos Mariner of Cape Canaveral, Florida.)

2. The Coldest Temperatures Ever Recorded in All 50 States. Every state in the continental U.S. has seen temperatures drop below zero. Of course, the coldest temperature in the U.S. was set in Alaska. The mercury plummeted to 80 degrees below zero on Jan. 23, 1971 in Prospect Creek in central Alaska, north of Fairbanks. The coldest temperature recorded in the contiguous U.S. is 70 degrees below zero, measured at Rogers Pass, Montana. (Submitted on March 29, 2021, by Cosmos Mariner of Cape Canaveral, Florida.)

3. Coldest Temperatures Ever Measured in the Contiguous U.S. Since the beginning of “modern” meteorological observations in the U. S. (circa 1875) only a handful of sites have officially measured temperatures of -60° or lower. Below is a list of the 15 that have achieved such. Only two sites — Maybell, Colorado, and Taylor Park, Colorado—have made the grade twice. The official contiguous U.S. minimum temperature of -70° (actually -69.7°) was measured at Rogers Pass on January 20, 1954. (Submitted on March 29, 2021, by Cosmos Mariner of Cape Canaveral, Florida.) 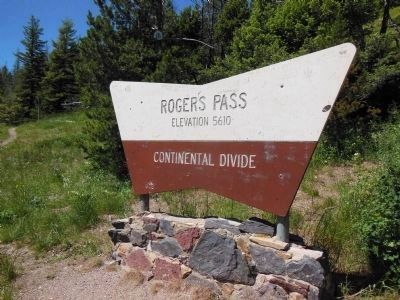