"Go forth, with spirit, the civic vision, and the courage to build the city of your dreams." —Alonzo E. Horton

A Vibrant New Town
The most striking evidence of the city’s downtown renaissance is its skyline. From the sculptural spires of contemporary office buildings to the preservation of vintage architecture, San Diego is constantly evolving. The history of modern San Diego began in 1867 when Alonzo E. Horton purchased nearly 1,000 acres along the harbor. Today, his vision continues to evolve in an eclectic mix of neighborhoods, restaurants, shops, and attractions that span San Diego’s lively metropolis, from the bay to the Uptown District.

Climate and location have attracted visitors to San Diego since the first Spaniards arrived in 1542. Today, the city’s urban scene, as well as its coastal, mountain, and desert topography, still attracts newcomers with a rich variety of attractions and cultural life.

Balboa Theatre
The 1924-vintage Balboa Theatre was San Diego’s first vital downtown theater, designed and constructed as a movie and vaudeville house. It was so beloved that designers 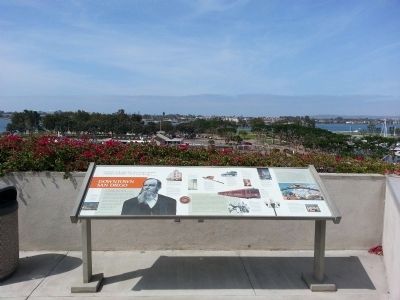 By Bernard Fisher, May 18, 2014
2. Downtown San Diego Marker
of the Horton Plaza shopping center, which stands adjacent, incorporated the Balboa Theatre and its distinctive tiled dome into the architecture of the shopping plaza.

Alonzo E. Horton
Alonzo E. Horton is known as “the founder of modern San Diego” because he had the vision and enthusiasm to build a modem city, “New Town,” of his dreams. He began by purchasing nearly 1,000 acres in the downtown area and proceeded to complete the wharf, build a hotel and plaza, and begin selling lots and prefabricated homes. When newcomers arrived in “New Town” by steamboat, Horton would rush to the wharf and welcome them to what he considered San Diego to be – Heaven on Earth. Much of Alonzo E. Horton’s New Town was granted historic preservation status in 1974 and can still be admired today.

Park-To-Bay Link
The Park-to-Bay Link takes pedestrians on a tree-lined, walking environment that begins in scenic Balboa Park, through the East Village District, past the Ballpark, and on to San Diego Bay’s striking waterfront and the San Diego Convention Center.

A Land of Many Cultures
San Diego is an ethnically rich community where many diverse cultures blend effortlessly. Hundreds of years ago, the Kumeyaay and other Native American tribes were among the first settlers in the area. Settlers from 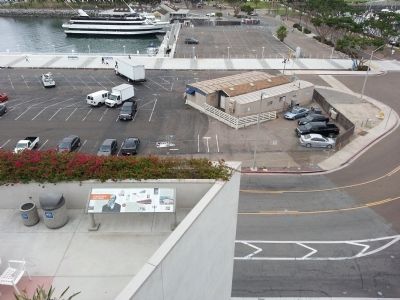 By Bernard Fisher, May 19, 2014
3. Downtown San Diego Marker
Spain and Mexico controlled San Diego until the end of the Mexican-American War in 1847. In 1869, Alonzo E. Horton’s New Town created exciting opportunities that fueled the growth of San Diego’s Asian/Pacific population. By the turn of the century, the first wave of Italian immigrants arrived in the area and established Little Italy, one of San Diego’s oldest ethnic neighborhoods. By the 1930s, most African-American San Diegans lived in the downtown area. Often referred to as the Harlem of the West, downtown was a cultural mecca with the Douglas Hotel and the Creole Palace—where stars like Duke Ellington, Billie Holiday, and Nat King Cole regularly performed.

Ballpark District
The vital redevelopment of the East Village area caters to native San Diegans and visitors alike with a variety of residential, commercial, and retail developments. However, the highlight of is undoubtedly the home of the San Diego Padres. Recalling the simple beauty of the early Spanish missions with its palm court, jacaranda trees, and water walls, this state-of-the-art, 42,000-person-capacity ballpark provides a picturesque venue for conventions, concerts, winter league baseball, and neighborhood festivals.

Stingaree District
One of the most enduring features of the Gaslamp Quarter is its checkered past. In the 1880s, the booming area south of Market Street became a notorious magnet for harlots and gamblers. Eventually, a red-light district appeared called Stingaree - a name adopted from the fierce stingray fish in San Diego Bay. Patrons said you could be stung as badly in the Stingaree as in the bay. Today, the Quarter glows with picturesque light of gas lamps, attracting locals and tourists alike to shop, dine, and enjoy the nightlife.

Wyatt Earp
One of the most legendary wild west lawmen was a colorful part of downtown’s history. In the 1880s, Wyatt Earp and his wife, Josie, capitalized on San Diego’s land boom by gambling and investing their winnings in real estate and saloons located in the Stingaree district, now the Gaslamp Quarter. Earp maintained four saloons and gambling halls in San Diego. The most famous was the Oyster Bar, located in the Louis Bank of Commerce Building at 837 5th Avenue.

Horton Plaza
Cultural exhibits and daily entertainment give Horton Plaza the ambiance of a festival market place. Since its opening in 1985, Horton Plaza has become known as the centerpiece of the new downtown. The 11½-acre shopping and cultural complex features major department stores and specialty shops, restaurants, two performing arts theaters, a multi-screen cinema, and an international visitor’s information center.

San Diego Trolley
The San Diego Trolley served historic Old Town, Mission Valley, Fashion Valley, and Qualcomm Stadium, as well as transportation to the Mexican border. Often called San Diego’s “moving landmark,” the Trolley is a fun way to get around and provides easy transfers with other rail and bus lines.

Ah Quin
Dubbed the unofficial “Mayor of Chinatown,” Ah Quin was a highly respected member of San Diego’s early Chinese community. Quin’s accomplishments included working as a labor broker for San Diego’s first railroad, acting as a legal spokesman for the Chinese, and bridging the gap between the Chinese and the Anglo establishments of his day. A notable Chinatown merchant and real estate proprietor, Quin and his family established the Quin Building at 3rd and Island, part of the Asian Thematic District, which still stands today.

The Historic Heart of the City
Illuminated by the amber glow of decorative gas lamps that line the streets, the Gaslamp Quarter is one of San Diego’s most popular attractions. Since the close of the Civil War, the 16½-block area has captured the lively spirit of a bygone era with its charming Victorian-style buildings constructed between 1880 and 1910. Visitors will have no problem finding something for everyone here. By day and by night, the vibrant neighborhood is alive with the sights and sounds of premier restaurants, sidewalk cafes, shops, nightclubs, and art galleries.

William Heath Davis House
The oldest surviving structure in the “New Town” section of downtown San Diego, The William Heath Davis House was part of Mr. Davis’ effort in 1850 to establish a new city by the Bay. The first use of the house was as a military officer quarters and also home to Alonzo E. Horton. Later it served as a County Hospital. It was lived in until 1981 but was never electrified and remains structurally unchanged from its original “salt box” style appearance. Originally established at State and Market Street, the home now resides at the corner of 4th and Island Avenues, where it now houses a museum and the Gaslamp Quarter Historical Foundation offices.

Location. 32° 42.36′ N, 117° 9.74′ W. Marker is in San Diego, California, in San Diego County. Marker can be reached from the intersection of Convention Way and Marina Park Way, on the right when traveling west. Located behind the San Diego Convention Center. Touch for map. Marker is at or near this postal address: 111 W Harbor Drive, San Diego CA 92101, United States of America. Touch for directions.