The city’s haven for culture and leisure

San Diego’s Cultural Oasis
Located just minutes away from downtown San Diego, Balboa Park provides an enriching experience for more than 14 million visitors from near and far each year. Referred to as “the Smithsonian of the West,” it is home to more than 85 cultural attractions including 15 museums, the Globe Theatres, and the world-famous San Diego Zoo. Balboa Park is equally as famous, however, as a horticultural paradise, where stately palms and forested lawns provide the backdrop for ever-changing floral displays. The site of the World Expo in 1935, this urban oasis encompasses 1,200 acres—one-third larger than New York’s Central Park—making it the largest urban park in the U.S. and the largest cultural complex west of the Mississippi.

Carousel
Built in 1910 and operating in the park since 1922, The Balboa Park carousel is one of the few carousels in the world that still offers the brass ring. The carousel is a menagerie of animals originally hand-carved by European craftsmen. 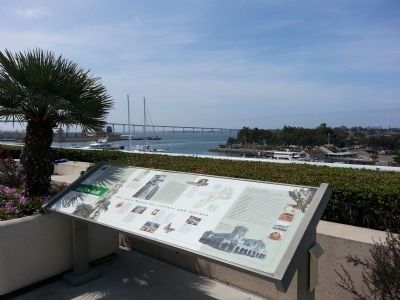 Click or scan to see
this page online
de Saint Phalle, prominently displaying her sculptures throughout the city. Well known for her giant- whimsical figures in bright mosaics, Niki’s works have become a focal point for both locals and visitors, and are a part of the permanent collections of the Mingei International Museum and San Diego Convention Center.

California Building
A beautiful reflection of San Diego’s early Mission and Mediterranean roots can be found soaring high above the Park’s trees. The richly decorated tile dome and ornate 200-foot tower of the California Building serves as Balboa Park’s focal point. Designed by American architect, Bertram G. Goodhue, to celebrate San Diego’s Hispanic heritage at the 1915 Exposition, it is one of two buildings designed for permanent use, a distinction it shares with the Spreckles Organ Pavilion. Today, the California Building’s colorful campanile, standing in bold relief, is a beacon to guests wishing to tour the San Diego Museum of Man, now located inside.

Park-To-Bay Link
In San Diego, pedestrians triumph over the automobile. The warm and dry climate is ideal for exploring the city’s attractions on foot or bicycle. The Park-to-Bay Link is a public improvement project established to join two of San Diego’s most frequented attractions with a pedestrian-friendly boulevard. The concept to connect Balboa Park with the bayfront 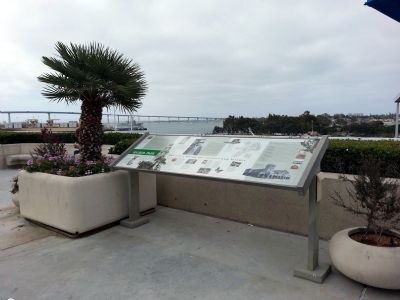 Photographed By Bernard Fisher, May 19, 2014
3. Balboa Park Marker
dates back to 1908. Landscape architect John Nolan from Cambridge, Massachusetts proposed a grand paseo, much like Las Ramblas in Spain, as part of this master plan for the city.

Kate Sessions
The Mother of Balboa Park
The woman who started it all, Kate Olivia Sessions Is largely responsible for transforming Balboa Park from a dry, desert landscape into the vibrant oasis visitors enjoy today. Ousted from her Catalina Island paradise, this pioneer horilculturist moved her nursery to the Balboa Park area in 1892. As part of her lease agreement, Kate put her green thumb to work by planting 100 trees each year in the park and furnishing 300 more for replacement throughout the city. It didn’t take her long to recognize the park’s potential, and in 1902 she formed the Park Improvement Committee with friends George Marston and Mary B. Coulston. Thanks to the efforts of this tight-knit group, Balboa Park continues to thrive as an integral part of San Diego culture. Kate’s abundant plantings of bird of paradise, queen palm, and poinsettia are still visible today throughout the grounds, earning her title as “The Mother of Balboa Park.” 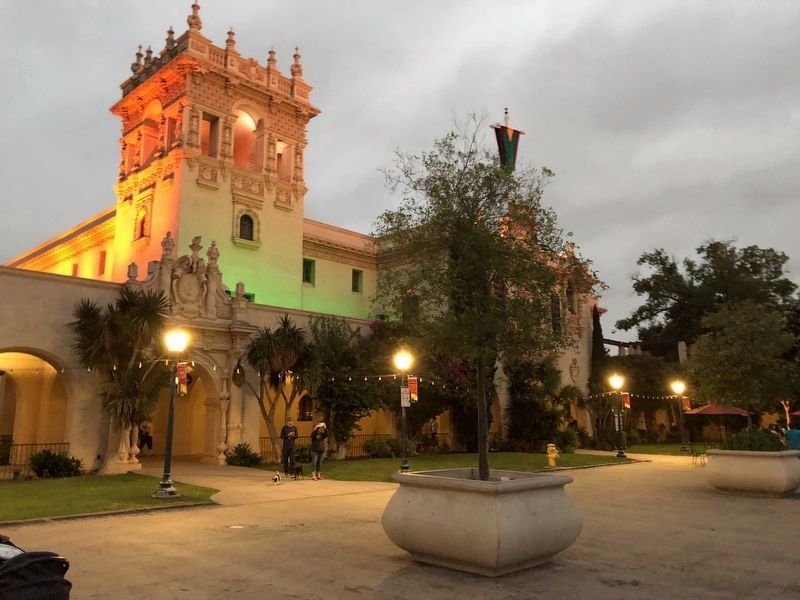 Photographed By Col. James F. Jamison, USMC (Ret)
4. Balboa Park at dusk.
completion of the Panama Canal. Held in Balboa Park, the event was designed to bolster the city’s economy, and included innovative displays of the latest agricultural, industrial, horticultural, and technological inventions.

Architecture
The stunning architecture is the legacy of two expositions. The 1915-1916 Panama-California Exposition is responsible for the magnificent Spanish Colonial Revival style buildings, housing many art organizations along El Prado. The 1935-36 California-Pacific International Exposition brought influences from earliest Aztec through Mexican pueblo style to art deco and arte moderne.

The Gardens
Balboa Park’s grounds are home to eight distinctive gardens, including an award-winning rose garden, a butterfly garden, the Japanese garden, a romantic English garden at the Marston House, and the Alcazar Garden, patterned after the grounds of Spain’s Alcazar Castle. Known for ever-changing displays of brilliant seasonal flowers, each of the gardens offers its share of horticultural wonders, among them the stately Moreton Bay Fig. This magnificent tree has a towering 60-foot-presence, and offers a cooling canopy of shade greater than 120 feet. Just down the Prado and reflected in the Lily Pond, the Botanical Building is home to a lush world of exotic flowers and trees. 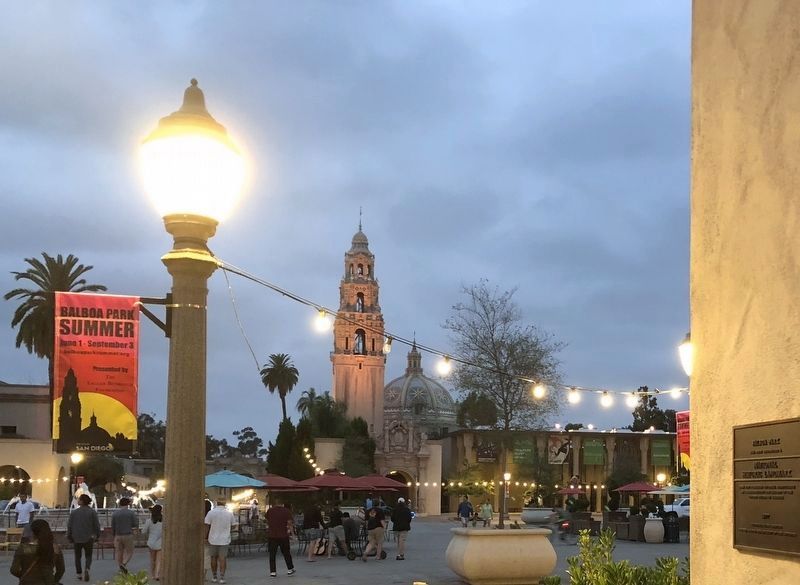 Spreckels Organ Pavilion
At the heart of Balboa Park lies the world’s largest outdoor pipe organ, permanently installed in the Spreckels Organ Pavilion in 1914. Equipped with powerful 32-foot, lead alloy pipes, the organ has played host to a parade of world-class musicians who lend their talents to melodies ranging from classical selections and show tunes to contemporary favorites.

The Cultural Experience
Home to 85 cultural attractions, including 15 museums, various performing arts and international culture organizations, Balboa Park is the largest urban cultural park in the nation. Below are just a few of its key attractions.

1. The Globe Theatres California’s oldest professional theater, famous for the production of world premieres and contemporary plays and musicals.
2. San Diego Zoo More than 800 exotic, rare, and endangered species in habitat-like settings, in the heart of an 100-acre botanical garden.
3. San Diego Museum of Man A collection of San Diego’s greatest treasures in a fascinating panorama of humankind.
4. Mingei International Museum A museum of “essential arts” – hand-made utilitarian objects that reflect the creativity and joyfulness of the human spirit.
5. San Diego Museum of Art One of the most respected and extensive collections of Renaissance, Spanish, Dutch, American, and Asian art.
6. Timken Museum of Art Five centuries of American and European masterworks, in an unsurpassed collection of galleries and displays.
7. Museum of Photographic Arts One of the country’s first museums to focus exclusively on work from the world’s most celebrated photographers.
8. Reuben H. Fleet Science Center A multi-sensory, out-of-this-world experience with an adventurous IMAX theatre and more than 50 “hand-on” exhibits.
9. San Diego Aerospace Museum More than 65 aircraft and spacecraft that chronicle aviation’s history, from the Wright Flyer to the space shuttle.
10. San Diego Art Institute Dedicated to the advancement of the visual arts, this state-of-the-art floating gallery features new showings every six weeks.
11. San Diego Automotive Museum A voyage through automobile-making history, with a display of rare and historically significant cars and motorcycles.
12. San Diego Hall of Champions Interactive displays stimulate the imagination in this activity center recognizing San Diego athletes in more than 40 sports.
13. San Diego Historical Society Museum Chronicles San Diego’s rich history with collections of art, china, furniture, glassware, costumes, and textiles.
14. San Diego Model Railroad Museum The largest toy train in the U.S. invites children of all ages to test their engineering skills at interactive exhibits.
15. San Diego Natural History Museum Features animals, plants and minerals of San Diego and Baja California past and present.
16. Spanish Village Art Center Colorful murals, a rotating gallery, and a performance center grace this center for Mexican, Chicano, and Native American art.
17. Centro Cultural De La Raza Showcasing the art and culture of Mexicans, Chicanos and Native Americans.
18. Starlight Bowl Constructed for the 1935 California-Pacific Exposition, this cultural center is summer home of the Starlight Musical Theatre.
19. Marston House This 1905 Arts and Crafts home, listed on the National Register, includes period furnishings and a formal English garden.
20. Veterans Memorial Center Honoring the men and women of the United Styates Armed Foirces, the museum sdispalsys artifacts dating back to the Civl War.

House of Hospitality
In the 1930s, the House entertained visiting dignitaries and First Lady Eleanor Roosevelt. During World War II, it was occupied by the U.S. Navy as an annex to Balboa Park Naval Hospital.

Topics and series. This historical marker is listed in these topic lists: Arts, Letters, Music • Entertainment • Horticulture & Forestry • Settlements & Settlers. In addition, it is included in the Art Deco, and the Eleanor Roosevelt series lists. A significant historical year for this entry is 1935.

Location. 32° 42.382′ N, 117° 9.773′ W. Marker is in San Diego, California, in San Diego County. Marker can be reached from the intersection of Convention Way and Marina Park Way, on the right when traveling west. Located behind the San Diego Convention Center. Touch for map. Marker is at or near this postal address: 111 W Harbor Drive, San Diego CA 92101, United States of America. Touch for directions.