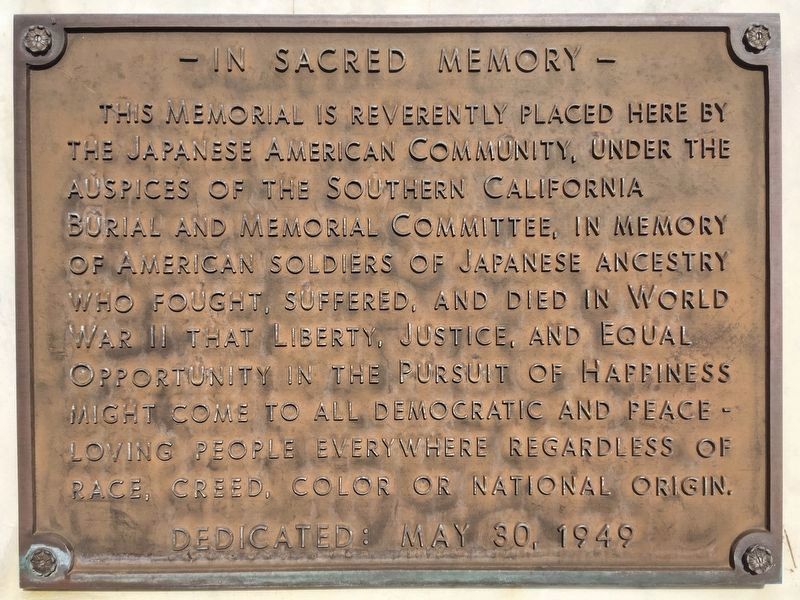 In Sacred Memory
This memorial is reverently placed here by the Japanese American Community, under the auspices of the Southern California Burial and Memorial Committee, in memory of American soldiers of Japanese ancestry who fought, suffered, and died in World War II that liberty, justice, and equal opportunity in the pursuit of happiness might come to all democratic and peace-loving people everywhere regardless of race, creed, color, or national origin.

Plaque mounted on the left side of column:
"Those who lie here gave their lives that this country, beset my its enemies, might win out of their sacrifice, victory and peace. We, who are in their debt, salute them."
Signature of Dwight D. Eisenhower
General of the Army, U.S.A. 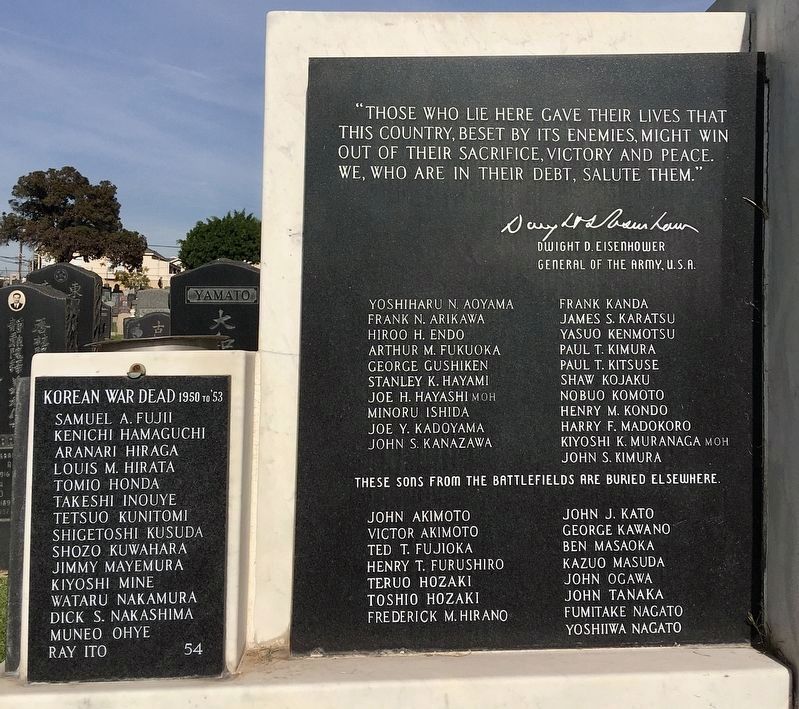 Plaque mounted on the right side of column:
"The soldiers who lie here symbolize the loyalty and courage of Nisei Troops under my wartime command in Italy. I salute them. May they rest in honored peace".
Signature of Gen. Mark W. Clark, U.S. Army
Mark W. Clark
General, U.S.A. 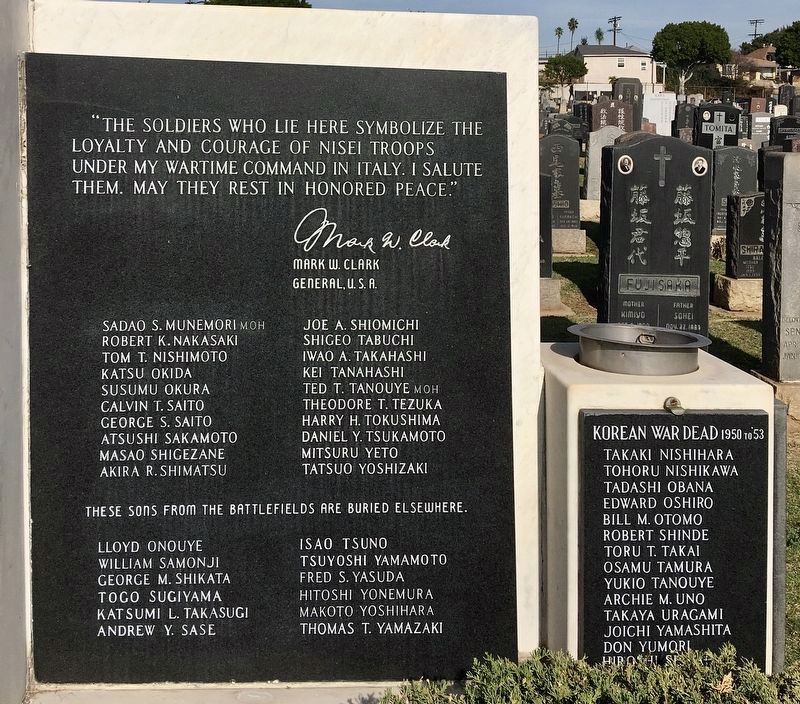 Topics and series. This memorial is listed in these topic lists: Asian Americans • Heroes • War, Korean • War, World II. In addition, it is included in the Former U.S. Presidents: #34 Dwight D. Eisenhower series list. A significant historical year for this entry is 1950.

Other nearby markers. At least 8 other markers are within 2 miles of this marker, measured as the crow flies. Chinese Memorial (approx. 0.4 miles away); Chinese Cemetery Shrine 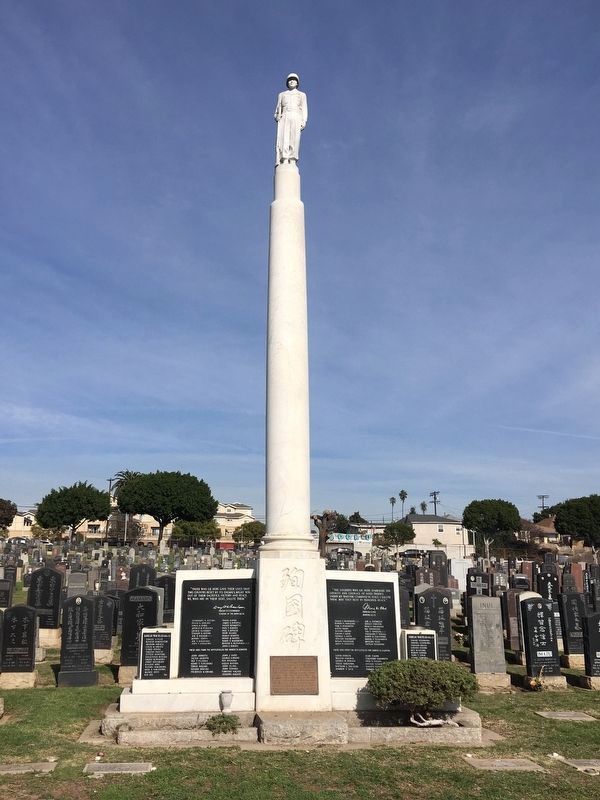 Additional commentary.
1. Joe H. Hayashi, Medal of Honor Recipient
His Medal of Honor Citation:
Private Joe Hayashi distinguished himself by extraordinary heroism in action on 20 and 22 April 1945, near Tendola, Italy. On 20 April 1945, ordered to attack a strongly defended hill that commanded all approaches to the village of Tendola, Private Hayashi skillfully led his men to a point within 75 yards of enemy positions before they were detected and fired upon. After dragging his wounded comrades to safety, he returned alone and exposed himself to small arms fire in order to direct and adjust mortar fire against hostile emplacements. Boldly attacking the hill with the remaining men of his squad, he 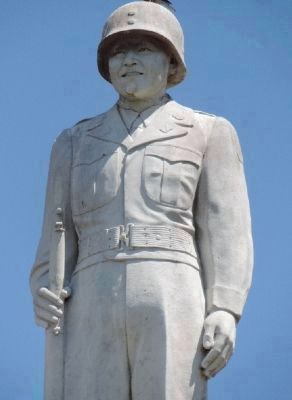 Photographed By Richard E. Miller, April 26, 2014
5. Nisei soldier statue atop the column
attained his objective and discovered that the mortars had neutralized three machine guns, killed 27 men, and wounded many others. On 22 April 1945, attacking the village of Tendola, Private Hayashi maneuvered his squad up a steep, terraced hill to within 100 yards of the enemy. Crawling under intense fire to a hostile machine gun position, he threw a grenade, killing one enemy soldier and forcing the other members of the gun crew to surrender. Seeing four enemy machine guns delivering deadly fire upon other elements of his platoon, he threw another grenade, destroying a machine gun nest. He then crawled to the right flank of another machine gun position where he killed four enemy soldiers and forced the others to flee. Attempting to pursue the enemy, he was mortally wounded by a burst of machine pistol fire. The dauntless courage and exemplary leadership of Private Hayashi enabled his company to attain its objective. Private Hayashi's extraordinary heroism and devotion to duty are in keeping with the highest traditions of military service and reflect great credit on him, his unit, and the United States Army
— Submitted February 25, 2013.
2. Kiyoshi K. Muranga, Medal of Honor Recipient
His Medal of Honor Citaion:
Private First Class Kiyoshi K. Muranaga distinguished himself 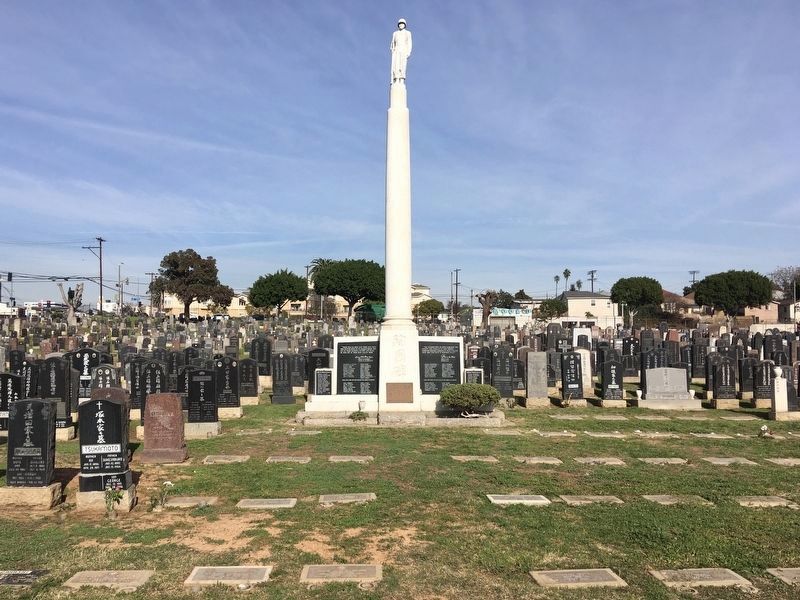 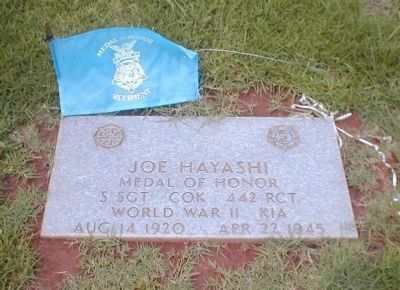 Photographed By Don Morfe
7. Medal of Honor Recipient Joe H. Hayashi Grave Site
Joe H. Hayashi is buried in Evergreen Cemetery, Section A, Lot 2734.
decided not to risk further exposure and immediately abandoned their position. Private First Class Muranaga's extraordinary heroism and devotion to duty are in keeping with the highest traditions of military service and reflect great credit on him, his unit, and the United States Army.
— Submitted February 25, 2013.
3. Sadao S. Munemori Medal of Honor Recipient
His Medal of Honor Citation:
Rank and organization: Private First Class, U.S. Army, Company A,
100th Infantry Battalion, 442d Combat Team. Place and date: Near Seravezza, Italy, 5 April 1945. Entered service at: Los Angeles, Calif Birth: Los Angeles, Calif. G.O. No.. 24, 7 March 1946. Citation: He fought with great gallantry and intrepidity near Seravezza, Italy. When his unit was pinned down by grazing fire from the enemy's strong mountain defense and command of the squad devolved on him with the wounding of its regular leader, he made frontal, l-man attacks through direct fire and knocked out 2 machineguns with grenades Withdrawing under murderous fire and showers of grenades from other enemy emplacements, he had nearly reached a shell crater occupied by 2 of his men when an unexploded grenade bounced on his helmet and rolled toward his helpless comrades. He arose into the withering fire, dived for the missile 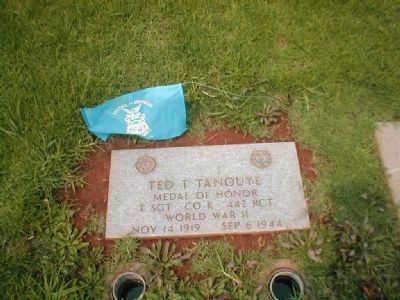 Photographed By Don Morfe, June 26, 2006
8. Medal of Honor Recipient Ted T. Tanouye grave site.
Ted T. Tanouye is buried in Evergreen Cemetery, Section A, Lot 2734
and smothered its blast with his body. By his swift, supremely heroic action Pfc. Munemori saved 2 of his men at the cost of his own life and did much to clear the path for his company's victorious advance.
— Submitted February 26, 2013, by Don Morfe of Baltimore, Maryland.
4. Ted T. Tanouye Medal of Honor Recipiant
His Medal of Honor Citation:
Technical Sergeant Ted T. Tanouye distinguished himself by extraordinary heroism in action on 7 July 1944, near Molino A Ventoabbto, Italy. Technical Sergeant Tanouye led his platoon in an attack to capture the crest of a strategically important hill that afforded little cover. Observing an enemy machine gun crew placing its gun in position to his left front, Technical Sergeant Tanouye crept forward a few yards and opened fire on the position, killing or wounding three and causing two others to disperse. Immediately, an enemy machine pistol opened fire on him. He returned the fire and killed or wounded three more enemy soldiers. While advancing forward, Technical Sergeant Tanouye was subjected to grenade bursts, which severely wounded his left arm. Sighting an enemy-held trench, he raked the position with fire from his submachine gun and wounded several of the enemy. Running out of ammunition, he crawled 20 yards to obtain several 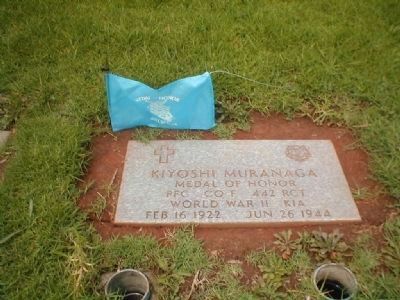 Photographed By Don Morfe
9. Medal of Honor Recipient Kiyoshi K. Muranga Grave Site
Kiyoshi K. Muranga is buried in Evergreen Cemetery, Section A, Lot 2734.
clips from a comrade on his left flank. Next, sighting an enemy machine pistol that had pinned down his men, Technical Sergeant Tanouye crawled forward a few yards and threw a hand grenade into the position, silencing the pistol. He then located another enemy machine gun firing down the slope of the hill, opened fire on it, and silenced that position. Drawing fire from a machine pistol nest located above him, he opened fire on it and wounded three of its occupants. Finally taking his objective, Technical Sergeant Tanouye organized a defensive position on the reverse slope of the hill before accepting first aid treatment and evacuation. Technical Sergeant Tanouye's extraordinary heroism and devotion to duty are in keeping with the highest traditions of military service and reflect great credit on him, his unit, and the United States Army.
— Submitted February 26, 2013, by Don Morfe of Baltimore, Maryland. 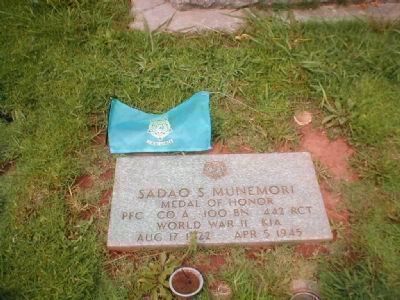