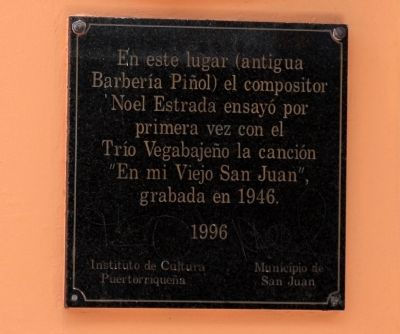 English translation:
In this place (the former Barbershop Piñol) the composer Noel Estrada for the first time with the Trio Vegabajeño debuted the song “In My Old San Juan,” recorded in 1946.

Erected 1996 by the Puerto Rico Institute of Culture and the Municipio de San Juan.

Topics. This historical marker is listed in these topic lists: Arts, Letters, Music • Entertainment. A significant historical year for this entry is 1946.

Other nearby markers. At least 8 other markers are within walking distance of this marker. José Julián Acosta Birthplace (about 800 feet away, measured in a direct line); Casa Natal de Don Ramón Power y Giralt 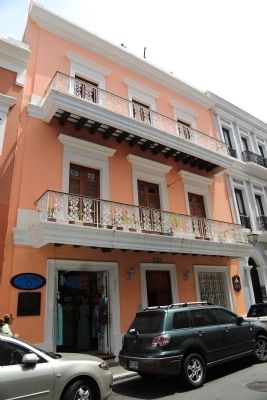 Also see . . .
1. Wikipedia entry for Noel Estrada. “Estrada was born in the town of Isabela, Puerto Rico, where he received his primary education. During the Great Depression, many Puerto Ricans either emigrated to the United States (mainly to the northeastern coast area) or joined the armed forces, with the hope of improving their economic situation. At the outbreak of World War II, Estrada joined and served in the United States Army. Being away from his homeland for the first time in his life would in the future serve him as inspiration when composing his world-renowned bolero ‘En mi viejo San Juan’.”

“Estrada composed ‘En mi Viejo San Juan’ in the 1940s, in New York. It is Estrada’s most popular composition, and is considered a second national anthem by many Puerto Ricans, especially those who live abroad. The City of San Juan honored Estrada as an adopted citizen and would later adopt the song as its official city anthem.” (Submitted on June 11, 2014.)

3. Wikipedia Entry for Trio Vegabajeño. “Trio Vegabajeño was a legendary Puerto Rican popular music trio that existed from 1943 to the early 80s. This group marked an era of popular music in Puerto Rico. When trios where very popular in the Americas, Trio Vegabajeño was considered the ambassadors from Puerto Rico. Vegabajeño is the demonym for people of the town of Vega Baja. Eventually they were recognized as the National Trio of Puerto Rico and on October 26, 1996 a monument was inaugurated in Vega Baja.” (Submitted on June 11, 2014.)
Credits. This page was last revised on September 12, 2020. It was originally submitted on June 11, 2014, by J. J. Prats of Powell, Ohio. This page has been viewed 614 times since then and 48 times this year. Photos:   1, 2. submitted on June 11, 2014, by J. J. Prats of Powell, Ohio.
Share this page.